Home » Online Exhibits » Penn History » A Brief History of Global Engagement at the University of Pennsylvania » International Crises: Penn’s Involvement in the Global Conflicts in the 20th Century » Korean War

When the Korean War began in 1950, the campus of the University of Pennsylvania answered the call to service as it had always done in past, during the other conflicts. At least seventy members of the Penn family saw active service in Korea. A handful of them were killed in action and some others were decorated with honors. Dr. Robert D. Dripps, Jr., who had graduated from the Medical School in 1936 and was widely known, spent some time in Korea observing the medical problems “relating to anesthesia, analgesia, and intravenous and intra-arterial infusions.” Dripps was at the time a professor at Penn at the Medical School and Chairman of the Department of Anesthesiology.

Though it seemed that most Penn men had passed the deferment exams of the Selective Service, and were able to attend classes in fall 1952, the attitude around the campus was bitter. It seemed, as reported in an article in The Pennsylvania Gazette of June 1951, that at commencement exercises, the campus was particularly sober. The article stated,

[t]he big step into the cold, cruel world for the Class of 1952 is now at hand and the question of the day is, “What are you doing after graduation?” One of the commonest answer, surprisingly enough, is “I don’t know.” The Class of 1952 doesn’t know where it’s going. A large percentage are waiting for their orders for the military which will send them to the four corners of the world…. Members of another group are sitting around wondering whether to bother answering acceptances from graduate school since they don’t know what their draft boards are going to say about it; and still others are just sitting waiting for the call to the colors. It’s a rather unhappy situation, since the uncertainty of the future has caused a universal fatalistic attitude.

Penn aided those men going into and returning from military service as best they could. In March 1952, Alpha Phi Omega and the Sphinx, Friars, Hexagon and Phi Kappa Beta Honor societies, with the American Red Cross, ran a blood drive for the soldiers in Korea. For three days, Houston Hall was taken over by the effort, which ultimately collected approximately seven hundred pints of blood. When the bloodmobile had to leave the Penn campus on the third day, there were still students hoping to contribute to the cause. In the fall semester 1952, under Penn President Harold E. Stassen, the University of Pennsylvania extended its deadline for veterans of the Korean War to register for classes, to enable them to study under the G. I. Bill of Rights. Class registrations were taken for them up to the week before the semester began.

As stated previously, a handful of Penn men were killed in active service. William M. Maisch, who had attended the Wharton School from 1948-1949, killed during the attack on Inchon on September 29, 1950. This was followed by the death of First Lieutenant Grant (Tubby) Ellis, who had graduated from the Wharton School in 1948, and had been on the University of Pennsylvania 1942 freshman football team, before joining the service during World War II. In his senior year at Penn, he was on the all-East and all-Ivy League [football] teams. Returning to active duty with the Marines, he was killed in Korea on September 30, 1950. On February 12, First Lieutenant Francis A. Uzzo, a graduate of the class of 1950 School of Education, who had been a member of the 38th Infantry Regiment, Second Division, was killed in Korea and that was followed by the death of Lieutenant Commander Philip S. Fisher, Jr., who had graduated from the School of Mechanical Engineering, on March 8, 1951. A fifth student, John Veckley, Jr., who had enlisted in the Marine Corps in January 1951, was killed in action on November 1, 1951. Veckley had served with the First Marine Division and had been on front-line duty. This was followed by the death of Penn alumnus Captain Stuart McCash, a graduate of the 1942 Wharton School, on December 14, 1951. McCash, a decorated officer from service in World War II, was a staff officer of the 10th Army Corps, and had arrived in Korea after service in Germany.

Those awarded honors in Korea included Ensign Judah L. Siegel, who had served in the United States Navy and had graduated from Penn in the College class of 1949, who received a Bronze Star Medal “for heroism for twice swimming the Han River under fire during action near Seoul.” Another was Second Lieutenant John A. Glascott, Jr., of the College class of 1948, who while in the Marine Corps, received a citation, an excerpt of which read, “During this period, as a result of his aggressive leadership and professional skill, his mortar platoon moved constantly in close support of the assaulting rifle companies over mountainous terrain.”

The Korean War ended with a ceasefire on July 27, 1953, though no peace treaty was ever signed. 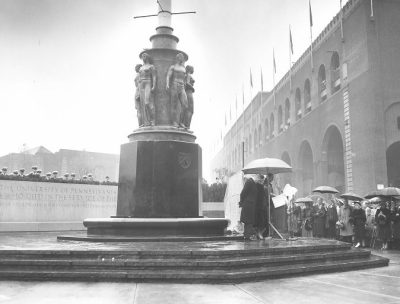