Home » Online Exhibits » A Brief History of Global Engagement at the University of Pennsylvania » International Crises: Penn’s Involvement in the Global Conflicts in the 20th Century » The Spanish-American War of 1898

When the United States declared war against Spain in April of 1898, the Penn campus answered the Government’s call to service. Students, alumni and faculty of the University of Pennsylvania fought in the war, and many others served in medical posts, both away from and on campus.

Probably the earliest relation of Penn to the warfare for Cuban independence was one of its alumni, John Bautista Marcial O’Bourke, a Cuban who graduated from Penn’s School of Dentistry in 1891. After graduation, he returned to Cuba and graduated from the University of Havana with a Spanish diploma. He practiced medicine in Cienfuegos until February 1895, when he entered the Cuban army under Brigadier-General Rogelio Castillo. He became chief-of-staff, but was soon moved to serve under Brigadier-General Alejandro Rodrigues. He was active at Cienfuegos, Trinidad, Santa Spiritus and Villa Clora. However, on July 27, 1896, he was wounded at the battle “Hoyo de Monica ragna” and died two days later.

The American war with Spain began in late April 1898 when the United States demanded a three-day withdrawal of all Spanish forces from Cuba and Cuban waters; if after such time the Spanish had not complied, the United States threatened that hostilities would begin. The Spanish, however, did not wait for the three days to pass; they declared war and by April 25, Congress did the same. 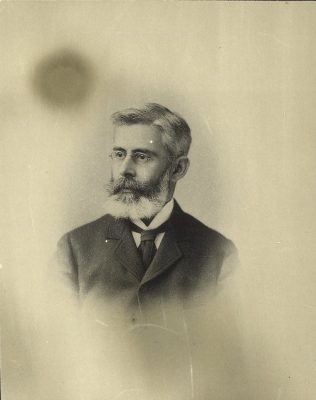 Juan Guiteras y Gener (1852-1925), M.D. 1873, Ph.D. 1873, Cuban alumnus, 1900
Get more image details
Penn’s support of the war effort had already begun. On April 22 there was an undergraduate “Cuban Demonstration” which involved eight hundred students. A procession began at the dorms, with the Penn band leading in front, and included stops for a speech by Dr. Juan Guiteras (pictured at right) M.D. 1873, Ph.D. 1873 (who left for Florida on April 30 to become the medical adviser for the army), the houses of Provost Charles C. Harrison and Dr. Richard Penrose, M.D. 1849. The procession continued to the State house where it saluted the statue of Washington and ended at the Union League.

In the event that troops would be called for by the Governor of Pennsylvania Daniel H. Hastings, plans to create a University battalion were mentioned at a meeting in Houston Hall on April 26. At that meeting, a call to service was made by Mr. Eugene Ellicott. That same day, those students who had joined the military left for Mt. Gretna, Pennsylvania – this was the site for Camp Hastings, a rendezvous point, from which enlisted men would move to various conflict destinations. There was also some sort of a medical post at that camp, which was attended by some University of Pennsylvania men.

By May 4, a University battalion organized by students had drilled for the first time. Debates were held that month in both the Philomathean Society and the Zelosophic Society, on various subjects related to the war. On June 12, 1898, John Blair Gibbs, M.D. 1881, died in Guantanamo, the first Pennsylvania man to be killed in the war; he had been an assistant surgeon during the conflict. Others who died in the war included George Elliott Jr., who had served in the First Pennsylvania Volunteer Infantry and a graduate of the College class of 1898. He had contracted typhoid fever and died at the German Hospital. Major Lawrence S. Smith, of the class of 1888, the surgeon-in-charge of the United States Reserve Hospital died on August 15 while on a transport from Puerto Rico. John B. Scott, of the Medical School class of 1899, contracted consumption. He had been the acting chaplain on the U.S. ship “St. Paul.” 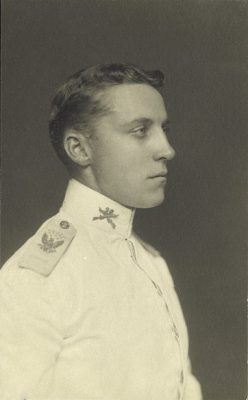 Granville Roland Fortescue (1875-1952), Class of 1899, portrait photograph in military uniform, 1900
Get more image details
There were also a couple of Penn students in the “Rough Riders,” the name for the First U.S. Volunteer Cavalry Regiment during the War. G. Roland Fortescue (pictured at left), College Class of 1899, joined that regiment at San Antonio, as a member of Troop E. He became wounded at San Juan and was awarded sergeant’s stripes. Fortescue’s stepfather, interestingly enough, was Robert B. Roosevelt, “Teddy” Roosevelt’s uncle. F. Allen McCurdy in the Music School class of 1901 and J. Kirk McCurdy in the College class of 1901 were also in the “Rough Riders,” both in Troop F. Joining up at San Antonio, like Fortescue, they participated in the fights at La Quasima and Santiago.

After the conflict ended, a “War-time Supper” was held by the Philadelphia Alumni Society of the Medical Department on November 19; Dr. John Guiteras, Dr. Edward Martin, Lightner Witmer, Dr. George C. Stout, Major Peyton, Dr. McMaster and others spoke about their war experiences. Also, at the end of the war, a Memorial Gate dedicated to Penn students, alumni and faculty who had served in the war was to be erected. It was expected that five thousand dollars should be raised for the completion of this project. The memorial that stands to this day is the Fisher Hassenfeld Gate at Memorial Tower.

Return to top
« International Crises: Penn’s Involvement in the Global Conflicts in the 20th Century
World War I »
X