Home » Online Exhibits » A Brief History of Global Engagement at the University of Pennsylvania » Taking Action for the Community: The International Students’ House at Penn

It is very important to note, right at the outset, that the International House of Philadelphia is not a part of the University of Pennsylvania. That begin said, International House is very important to the University of Pennsylvania campus and community, and it has been so historically. If one looks at the dates mentioned at the beginning of the succeeding sections on the Office of International Programs, one will notice that that office was created in 1949. Its campus predecessor was the Office of Inter-American Activities, which had been created in 1946. But a concern for the welfare of international students at the Penn campus began long before these offices existed. The group of people who ran an institution for that concern, which began informally in 1908 and formally in 1910, was the Reverend A. Waldo Stevenson, Edward W. Cope and the Christian Association, clearly forty years before Penn created an office to deal with similar issues.

The Beginning of International House

In 1908, the Reverend A. Waldo Stevenson was walking through the Penn campus and ran into a group of Chinese students. He spoke with them and was astonished that he was, apparently, the first American to befriend them. Taken aback and intrigued, the Reverend and his wife began to invite foreign students from Philadelphia colleges into their apartment every Friday night and entertain them (one such gathering is pictured above). He continued to do this for many years, even after 1910, when the Christian Association of the University of Pennsylvania was presented with the issue and consequently decided to take it on, under persuasion from Edward Cope Wood. In the 1911-1912 academic year, Stevenson became the Foreign Mission Secretary of the Christian Association, and by the next year was devoting all of his time to the foreign students at the University of Pennsylvania.

Not many years later, the Christian Association, with suggestions from Stevenson and Wood bought the property at 3905 Spruce St. from the Potts family. In an article from The Register dated June 25th, probably from 1917, it was stated that Mr. Potts (who was also a member of the Board of Trustees at the University of Pennsylvania) had originally bought the property for $100,000, but he was “so impressed with the idea that he sold the old mansion… for $20,000.” On New Year’s Day, 1918, 3905 Spruce Street (pictured at left) officially opened its doors under the sponsorship of the Christian Association as a Home for Foreign Students, which came to be known as the International Students’ House and Stevenson became its first director. 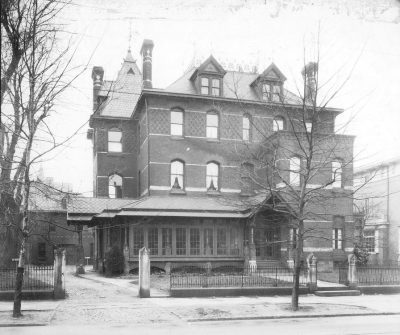 The building at 3905 Spruce Street was to have a lounge on the first floor as well as a reading room, a dining room and fifteen living rooms on the upper floors (living room, c. 1917, pictured at right). Although the location contained no living facilities, it did provide a number of services to foreign students in Philadelphia, predominantly those at the Penn campus, if for no other reason than its location. There were counseling and information services for a host of problems foreign students might encounter, including language, financial, health and diet, immigration and technical problems as well as maladjustment to living in the United States. It was also used for recreation and leisure, as lounges had radio, phonograph and television facilities and there were game and reception rooms. The International Students’ House also provided for programs including forums, debates, lectures, panels and planned trips and outings as well as weekend activities such as dances, films and game nights. Also, for the next thirty-three years, the International Students’ House would be sponsored by the Christian Association of the University of Pennsylvania. 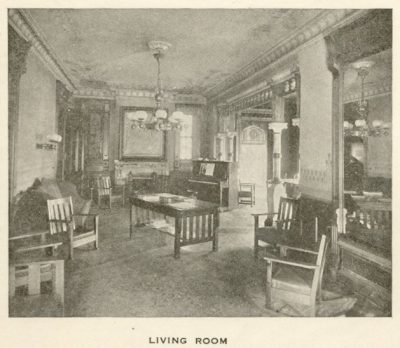 Growth and Expansion at the International Students' House

In 1925, Elmer T. Thomspon replaced the Rev. A. Waldo Stevenson as the Director of International Students’ House. Programs at the International Students’ House, as documented in the International Students House News, continued without much change until around 1940. Although there were some struggles in the time of the Great Depression, apparently, the “sheer determination and courage of Dr. Elmer T. Thompson, the director, and his wife” allowed the House to continue its purpose. Giles L. Zimmerman, who would later become the first President of International House after it moved its location to the Whittier Hotel, gave information on the House in the decade from 1940 to 1950 in a report to its Board of Trustees dated January 9, 1957. He recorded how in 1943 the Christian Association:

A membership fee was created which hadn’t been done before. This was largely at the request of the War Chest. The War Chest brought more publicity to International House, but it also raised the question of why people were now aiding foreign students when they had not in the past. What was the value to one’s self in aiding others? Was it out of self-interest that more people were becoming involved with the affairs of International House? Regardless, the optimists, as expressed by Zimmerman, saw this expansion as an opportunity for many things, but perhaps most of all, as stated by Zimmerman in his report was that:

[i]f International House could make this a work with, instead of for, foreign students, it had an opportunity to bring about greater understanding between individuals on an international basis. This understanding, based on person-to-person knowledge, was surely a key which would unlock at least one of the barriers to world peace. [emphasis added]

Zimmerman believed in this philosophy.

International House, though, lost its funding from the War Chest at the end of May, 1949. The War Chest, under strain from financial concerns, felt that they needed to devote more money into the welfare of Philadelphia citizens. Zimmerman was hired as the new Finance Director. He contacted those in the past who had financially supported International House and attempted to get more contributors. This, as Zimmerman reported, did not work. He stated that “[n]early all were either in a retirement situation, or a changed financial situation.” International House struggled to survive after being dropped from the War Chest, but the fact is that it did. Zimmerman stated that the survival was “something which [did] not usually happen to an agency dropped by the Chest. International House is the only one [he] knew [of] that did survive.”

Zimmerman was given more responsibilities after the Director, Elmer T. Thompson, unexpectedly died in 1950. He became the new director, and due to a lack of funds, had only one other assistant director who was in charge of programs. The decline of funding continued, and in 1953, Zimmerman lost that help as well. He was put in charge of three huge responsibilities: administrative, financial and programs. His only help was a single hostess. His report, as already mentioned, was dated 1957. It was a plea for the Board of Trustees to expand programs so International House could grow, attract more attention, and so attract more funding. Of course, the number of foreign students in the Philadelphia area had only grown throughout the years. From 1940 to 1954, the number had more than doubled. Zimmerman reported that before 1940, there were usually no more than five hundred. In 1954, there were about twelve hundred.

The answer came in 1959, two years after Zimmerman’s report to the Board of Trustees, when International House moved its location from 3905 Spruce Street to the former Whittier Hotel located at 15th and Cherry Streets (pictured at left). The Whittier Hotel had been lent to International House by the Society of Friends, but in 1965, the old hotel was scheduled for demolition, as the portion of 15th street above Arch St. was widened. Once again, International House had to be moved to a new location. That new location began to be built in the late 1960s, virtually on the Penn campus. It would become an extremely welcome return. During the time period at the Whittier Hotel, though, the International Festival Ball continued, an event that became annual and this present year celebrated its 48th Anniversary. 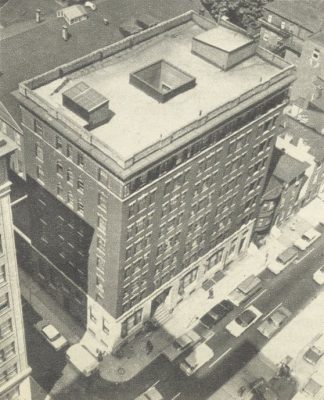 In that same report, Lambert also recognized the importance of what International House did in comparison to what his office was responsible for. He wrote that,

[o]ne of the programs built into the new International House is the deliberate mixing of foreign and American students. Interestingly enough this innovation is in the domain of foreign student management where the University’s primary concern should lie. So far, at this University as elsewhere, foreign students services have been aimed at meeting the special needs-personal as well as academic-of the foreign students themselves, while very little has been done to maximize their usefulness in creating an international climate on the campus. It should be emphasized that the University’s interest in foreign students is only partly in solving their problems, it is also in using their presence to internationalize our own campus.

With International House moving back to Penn campus, the internationalization of the campus could only progress, it was surmised. Richard Lambert was correct. Its move back to the Penn campus made possible everything that was expected. 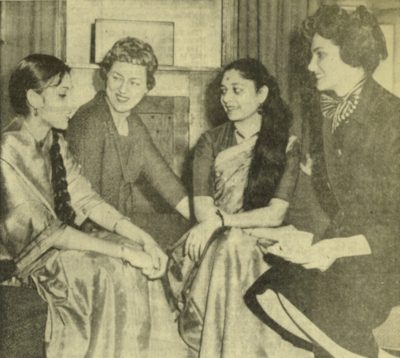 That new location was built and opened at the end of 1970 at 37th and Chestnut Streets. (pictured at left). The funding for the building of the new International House totaled $8.5 million (adjusting for inflation, that amount would be over $45 million today), and came from three main parties. They were a $5 million grant from the Haas Community Funds was endowed by Mr. Otto Haas, $1 million from the community and a $2.5 million interest loan from the Department of Housing and Urban Development. Still, International House remained a non-profit organization. The new building was twelve stories tall and had been designed by the Philadelphia architectural firm of Bower and Fradley. At its dedication ceremony in late November, 1970, the address was given by the Honorable Marietta Tree, who was the former United States delegate to the United Nations. Also, in 1986, International House became “the first building in Philadelphia to convert from steam power to a cogeneration system… utiliz[ing] the same fuel for two different operations.” These operations were electricity and heating. This new energy plan was a $900,000 project and by doing so, International House intended to save $200,000 annually. Prior to 1986, an energy bill at International House was reaching a half of a million dollars. 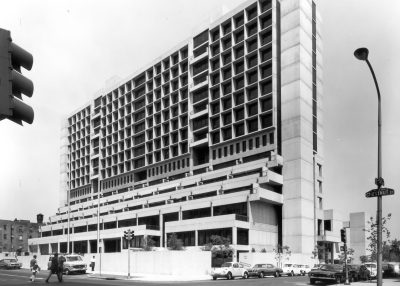 [r]esidents have several shared theories about why I-House people live together so well. First, it’s a commonly-held belief there that nations cause wars, not people… And they see that the politics of an “enemy” nation is not the responsibility of its citizens, who are powerless to regulate political activites. And so most people are able to deal with one another as people, rather than as representatives of any nation. 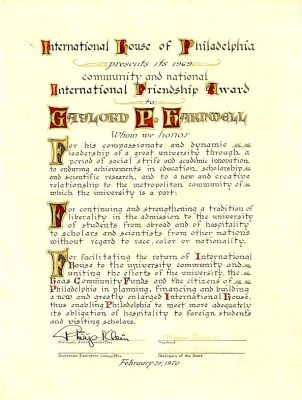 Return to top
« A Brief History of Global Engagement at the University of Pennsylvania
Dealing with Global Engagements: A Historic Overview of the Office of International Programs, 1949 to the present »
X