Home » Online Exhibits » Penn History » A Brief History of Global Engagement at the University of Pennsylvania » Penn around the World: A History of Penn’s Engagement with Specific Regions and Countries » China

It seems that the first Chinese student to graduate from the University of Pennsylvania was Moon Hung Chaun, who earned a Doctorate of Dental Surgery in 1899. Henry Kunghui Chang earned a Bachelor of Laws degree at Penn in 1909, a year in which four other Chinese students graduated. In fact, it seems that most of the Chinese graduates from the University of Pennsylvania were either earning Bachelor’s degrees in economics, Medical degrees, or Law degrees through 1911. In 1910 George Nitzsche published what was essentially a course catalogue in both Chinese (cover page pictured below) and Spanish, and it was discovered that Penn alumni living in Shanghai had established a University of Pennsylvania Club there as early as 1915, with the former Chinese Ambassador, Wu Tingfang, as its first president. 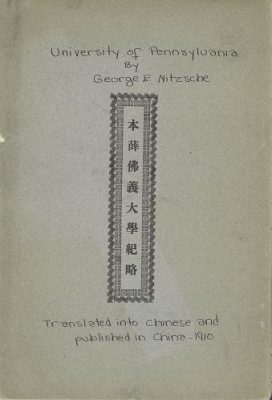 However, as the situation in China worsened over the course of the first half of the twentieth century, Penn’s relations with that country became gradually unstable. With the communist revolution occurring in 1949, and the Chinese students at Penn in that year fearful to return home, it is no wonder that records of Penn’s relations with that country suffered in the years that immediately followed.

One was able to find some China-related events that occurred at Penn in the mid-1960s. In March 1966, Dr. Derk Brode and five other Penn professors sent at statement to the United States Government “calling for [a] revision of United States policy towards Communist China.” Their hope was that if the United States could improve its relations with the People’s Republic of China, then perhaps some of the problems resulting from the situation in Vietnam, could be relieved. The next month, the Penn Museum hosted a three-day National Conference on the United Nations and China, sponsored by organizations including the International Affairs Association, the Collegiate Council for the United Nations, Penn’s Office of International Services, and the Association of International Relations Clubs.

During Martin Meyerson‘s years as President of the University of Pennsylvania, from 1970 to 1980, the University’s interest in China increased dramatically. In 1972, United States President Richard Nixon visited China. It was argued that this set-off a new wave of interest in Chinese culture and the Chinese language. At the University of Pennsylvania, the number of students enrolled in Chinese language courses grew three times. The Chinese Music Ensemble of New York appeared for the first time in Philadelphia by performing at the University Museum in April 1973, which began a series of ethnic events in the Greater Delaware Valley. In 1974, the University Museum and the Chinese Students and Alumni Association showed three Chinese films, and the next year, the latter served a Chinese meal and presented Chinese folk-dancing and singing. That same year, in March 1975, sessions of “A New Look at New China,” occurred in the campus community. The series was sponsored by the University of Pennsylvania, Penn’s Forum on Social Change and the U.S. China Peoples Friendship Association, and was held in various locations including Houston Hall, the Fine Arts Auditorium, and the International House of Philadelphia. 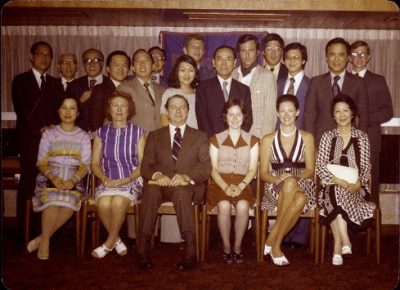 In 1977, twenty-two University family members, including alumni, members of the Board of Trustees, faculty and administrators spent eighteen days touring the People’s Republic of China. The first trip to China by the engineering school was made in 1978 by two Penn professors, John Carr and Harvey Garner. Two years later, in 1979, Penn hosted a conference on America’s role in the People’s Republic China, including changes in Chinese science and technology. Of the Penn faculty, both Dr. W. Allyn Rickett and his wife, Dr. Adele Rickett spoke on Chinese politics and literature. While studying in China under a Fulbright Scholarship in the 1950s, they had both had been imprisoned as spies. Many other events occurred that year. In the spring, Wei-Chu Chen, a chemistry researcher. one of the first Chinese scholars able to leave the country on an exchange between that country and the United States, visited the Penn campus and spoke in the Chemistry Building. Twenty-two scientists from the People’s Republic of China arrived in Philadelphia in May and were principally hosted by the University of Pennsylvania. That Chinese delegation was led by Pei Lisheng, then the Vice Chairman of the Scientific and Technical Association of the People’s Republic of China, and the group was to be in the United States for a little less than a month. At Penn, various parts of the group visited the University Museum, the Wharton School, the School of Veterinary Medicine and other laboratories. Only a little more than a week later, a second group of eight Chinese scholars, this time a delegation from Chekiang (now Zhejiang) University in Hangzhou, and led by its Vice President, Liu Dan, visited the Penn campus. That group also contained experts in various schools of the sciences including computer science, biomedical engineering, physics, etc. Six Penn professors, most with their families, traveled to China that summer to visit five Chinese universities. With the goal of discussing possibilities of exchange programs for members of the Penn family in the engineering fields, they made a reciprocal visit to Chekiang University in Hangzhou. In the fall, a discussion was held at Penn entitled “Observations on the Economy and Economics of China” with two professors from the University of Pennsylvania, Lawrence Klein and Irving Kravis, and two economists from the People’s Republic of China, Dr. Lu Dixin and Dr. Ding Chen.”

A delegation of Chinese Materials Science educators arrived at the University of Pennsylvania in January 1980 while taking a tour of the United States. This was followed by a visit on May 25, 1980, of eight Chinese scholars from Chekiang University in Hangzhou to the Penn campus. This visit was special to Dr. Chung-Tao Yang of the Penn Department of Mathematics, as he was a graduate of Chekiang and one of the members of the delegation had been a former classmate of his. Also, in August 1980, Penn began a six-week world affairs course entitled “West Meets East: A New Look at China.” More notably, though, in September 1980, an agreement was signed between Penn and Shanghai Jiao Tong University (SJTU) (pictured below), in which Penn would aid SJTU in developing its programs. SJTU would then aid Penn in calling attention to activities in China, such as those in the fields of political science and the environment, Chinese history, etc.

Shanghai Jiao Tong University signs an agreement with the University of Pennsylvania, 1980
Get more image details

Also in September 1980, the United States signed historic agreements on airline traffic, textile trade, shipping and diplomatic relations. This was followed by a three-day seminar on The Chinese Economy and American Business at the University of Pennsylvania. American business representatives, all from Fortune 1000 companies, and Chinese economy experts met with members of the State Department and other scholars. The seminar was co-sponsored by the Wharton School and the Faculty of Arts and Sciences at Penn. In 1979 and 1980, the engagement between the University of Pennsylvania and the People’s Republic of China was staggering. In November 1980, no doubt reflecting on the amount of involvement that Penn was having with institutions and people in the People’s Republic of China, the Dean of Engineering, Joseph Bordogna, stated that,

[d]uring the Cultural Revolution, people were chastised. Now the policy of the government is very pragmatic. They need people to lead them to a modern age…. The People’s Republic of China understands that with a billion people and with the country in the archaic state it is in, they have a management problem. They are interested in the fact that Penn has a management-technology program which is one of the best in the country.

Professor Allyn Rickett, mentioned earlier as having spoken about China, after having been imprisoned with his wife there under charges of espionage by the Chinese government, said that,

[r]ight after normalization [in 1972], everyone in the country wanted to develop some kind of relationship with China… [though] [i]n most areas of technology, China is on the receiving end of us. [B]ut China has a long tradition of intellectual excellence and they are moving rapidly to catch up. In some specific areas, that will be no problem at all.

For example, in 1980, Peter Zhou (pictured below) became the first Chinese student to study with the University’s Department of Materials Science. At Penn, studying for his doctorate, he had been able to receive his undergraduate and graduates degrees in China – before the Cultural Revolution. He came to study at Penn to meet with American scientists. His family remained in China.

What Bordogna had stated (as mentioned in this report), was true. By December 1981, members of the Wharton faculty were in China, and were to stay there for two and a half years, to aid that country in developing a graduate program in business management. The course began at the institution Penn had signed an agreement with – Shanghai Jiao Tong University. The fact that China was and is a communist nation had little bearing; at SJTU, the Chinese were going to learn American style business. The first professor to teach there was David Solomons, at Penn a professor of accounting, and he stated that “[i]f there is ideological difference, it’s not overt.”