Given the dramatic changes in the make-up of the University of Pennsylvania during the decade when the University Magazine was published, it is unsurprising that the form and focus of the journal changed to the extent that it did. The Magazine was the prime venue for students to comment on the changes at the University, and correspondingly, the shifts in content reflected the changing attitudes of students at Penn during this period. The number of schools doubled; the total university student population increased from 857 in 1875, including over 400 medical students, to 1,022 students by 1885. Beyond the 21% increase in student population, the physical plant of the University also expanded.

Provost Charles Janeway Stillé had overseen the University’s move from Ninth Street and the construction of the three buildings that formed the core of the University’s presence in West Philadelphia. Under Provost Stillé’s leadership, the University escaped from its cramped and antiquated quarters at Ninth and Arch streets in 1872 to the wilds of then functionally rural West Philadelphia. College Hall, then known as “the College Buildings” was completed in 1872, followed by Medical Hall, subsequently Logan and now Claudia Cohen Hall, in 1873, and the Hospital of the University of Pennsylvania in 1874.

The institution underwent a change in leadership after Provost Stillé resigned in 1880 after clashes with the Board of Trustees of the University. He was replaced by Dr. William Pepper, Jr., a physician and professor in the medical school who had been closely involved in the reforms of Penn’s medical school during the 1870s. With the election of Pepper as provost, the University of Pennsylvania embarked on a new period of dynamic growth that moved the institution closer to the practical, industrial education and organizational structure of the modern university and away from the limited classical curriculum that had previously defined undergraduate collegiate education. These same changes were reflected in the content and structure of the University Magazine.

The humanities and scientific professors occupied separate wings of College Hall, with space in the central block for administrative offices, an assembly room for students, a chapel, now the large lecture hall known as College Hall 200, and a small library. 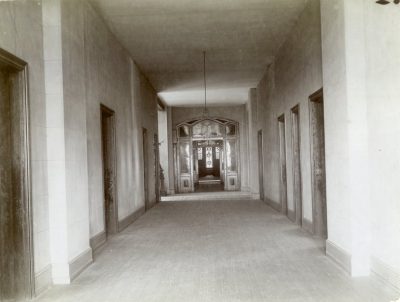 After a brief lull following the move to the new campus, there was a flourishing of new student organizations. The Philomathean and Zelosophic Societies had been active for decades; in West Philadelphia they were joined by the College Boat Club and the Glee Club, both founded in 1872, and the Athletic Association, founded in 1873. By 1885 students would have also formed an orchestra, a sketch club, a Christian association, a dramatic club, a chess club, and various scientific societies as well as a number of new athletic teams and clubs. All these groups needed places to meet.

The rooms at the top of College Hall, just under the roof on the fourth floor, were built specifically for the Philomathean and Zelosophic Societies, with the Zelo rooms being taken over by several successive Scientific Societies after the former’s collapse in 1872. The setting aside of specific rooms for the collegiate literary societies was meant to draw student extracurricular life, such as it was at the time, to the new campus, which was now located far from the center of Philadelphia.

The editors of the Magazine were graced with an editorial sanctum in College Hall, separate from the Philomathean Society rooms. Apocryphally located beneath “Professor Sadtler’s chemistry laboratory,” somewhere on the north-west end of the building, the room was stuffy, cramped, and completely unheated. During the winter of 1883, the ink bottle froze over repeatedly, resulting in a trek around College Hall in search of warmer climes, and an editorial about the peculiar failure of the University to provide study space for its students.

“DURING one of last week’s frigid days we had some writing which had to be done in the University building…the editorial ink was frozen solid, so we had to start on a tour of investigation in search of what one would hardly expect would be scarce in an institution of learning, namely, pen and ink, and a place to use them.”
(March 20th 1883)