“TO-DAY we present to our readers the first number of the first volume of THE UNIVERSITY MAGAZINE, a monthly periodical, to be devoted entirely to the interests of the University of Pennsylvania…We have a hearty interest in our college life, and therefore we…feel great pleasure in contributing our mite at least toward assisting the outside world to appreciate the thoughts and to understand the advantages and pleasures of our venerable Alma Mater.”
(Nov. 5th, 1975) 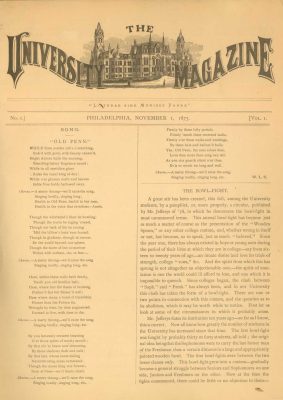 The last quarter of the nineteenth century was a period of unprecedented growth and development for the University of Pennsylvania. In 1875, at the time of the founding of the University Magazine, the entire population of the University, including the medical, auxiliary medical, and law schools, was only 857. At that time, students were still in the early stages of creating extracurricular life, conceived, financed and implemented by their own efforts. 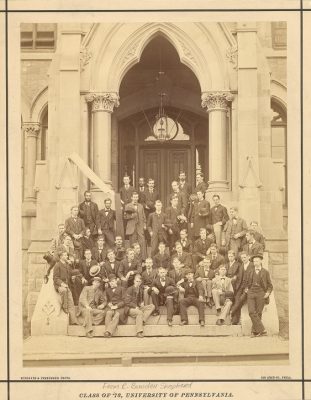 Twenty years later (and ten years after the last issue of the University Magazine), campus life would be much different. In 1895, the University would have 754 students in the College department alone. Student organizations would be flourishing, and campus life would be granted a new hub with the opening of the Houston Club, now Houston Hall, as the first student union in the United States. By 1895 the rough athletic field between Spruce and Pine streets (developed in 1885), would become the site of the Quadrangle, Penn’s first dormitories, and a new athletic field would be taking shape on 33rd Street—it was subsequently called “Franklin Field.” Most remarkable about these developments was that they were university-financed projects; the students had not been responsible for fund-raising or paying subscriptions, as they had in the 1870s and 1880s. 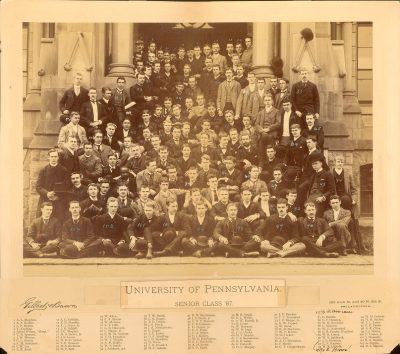 Although the Pennsylvanian maintained a degree of autonomy from the university proper, aided by its independent financing structure, the trajectory of the University Magazine from student project to official newspaper of the University of Pennsylvania is in many ways representative of the changing place of student organizations at the university during this time period. By the end of the nineteenth century, the university was no longer a passive transmitter of knowledge, a sort of finishing school of classical literature and good diction for wealthy young men to pursue between the hours of breakfast and afternoon tea. Instead, the collegiate experience was becoming all-encompassing, emphasizing original knowledge and individual development in a way that was unimaginable a mere twenty years before.

For the first four or so years of its existence, the University Magazine focused primarily on literary essays; the September 1877 issue began with essays on “Originality,” “Capital and Labor,” and “Socratics.” Even from the first and most “literary” issue, the Magazine evinced an awareness of and an interest in engaging with the issues of the day, both at the University of Pennsylvania, and in the larger milieu of the late-nineteenth century eastern American elite.

After 1879, the Magazine‘s editorial section began to dominate, with news stories and articles discussing current events taking precedence. In the 1880s, first-hand reportage of athletic contests, Glee Club concerts, and prize orations grew in steadily in prominence, and were soon joined by sentimental fiction, clippings of news from other colleges, tables of batting averages and cricket scores, and even a column labeled “Growls” where the editor would vent his frustration with different aspects of college life. Published on a monthly basis beginning in November 1875, the Magazine moved to a semi-monthly schedule in October 1881 in order to report on University life in a more timely fashion.

During its life span, the Magazine abandoned its classical literary antecedents and instead became a chronicle of college life, serving as a cheerleader for nascent student activities and engaging in journalistic advocacy as the university’s primary venue for student-faculty communication. The transformation of the Magazine from passive “lit.” to a fully independent activist student newspaper over the ten years of its publication can be viewed as a representation in microcosm of the larger transformation of American higher education—the emergence of the modern collegiate experience and the decline of the classical college curriculum—during the same period.

Return to top
Origins Within the Philomathean Society »