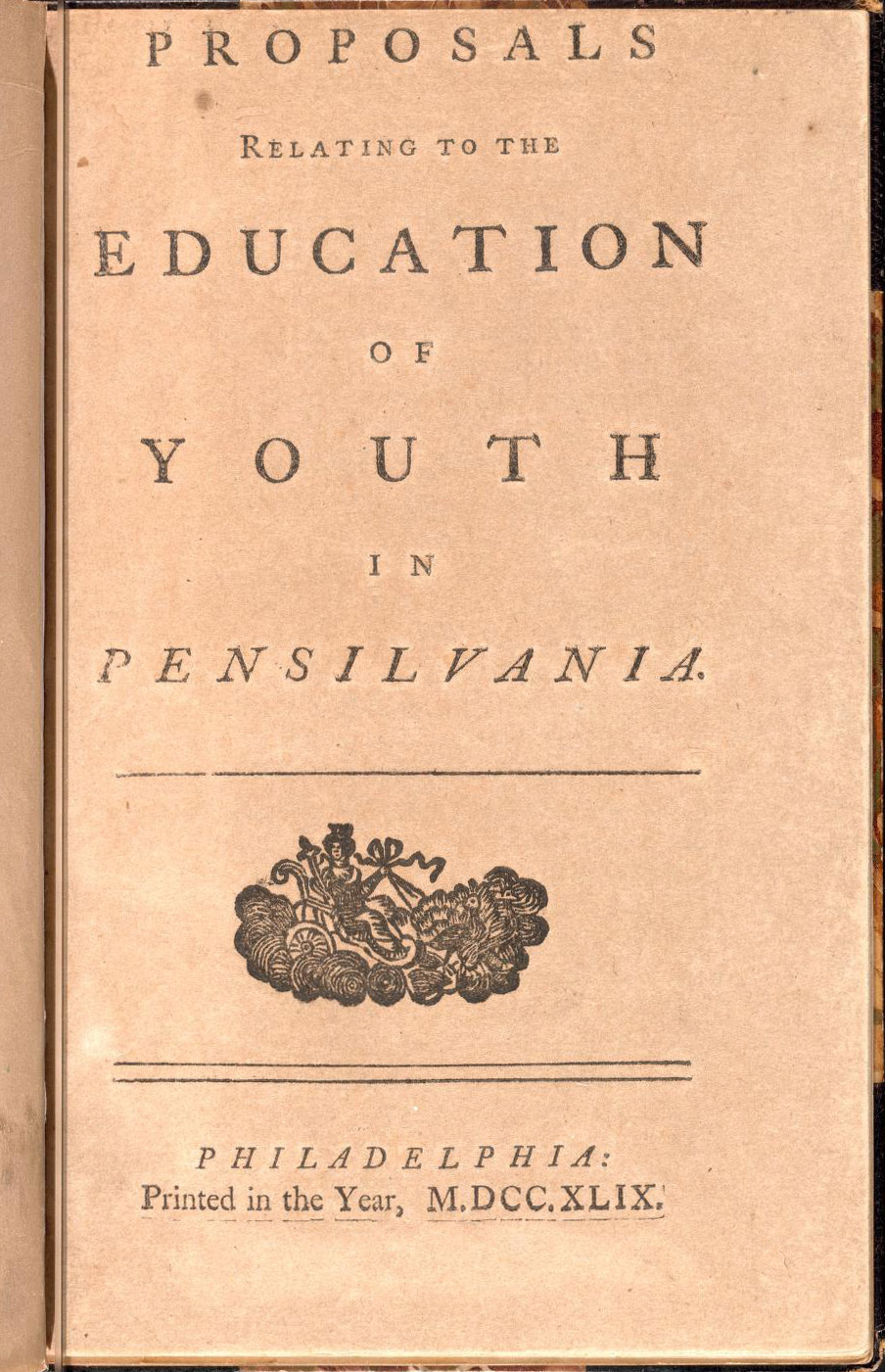 Proposals Relating to the Education of Youth in Pennsilvania, Benjamin Franklin, 1749
Get more image details 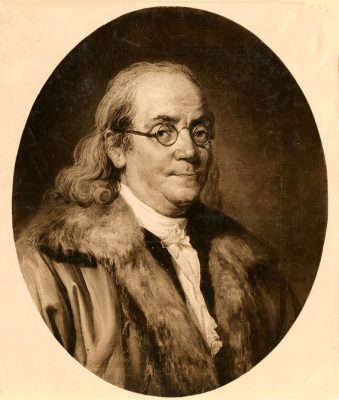 Penn was founded on unique grounds in the history of education. In Philadelphia Benjamin Franklin sought not only to create a local institution of higher learning, but also to provide an education that did not fit the models already established in New England and Virginia. In Europe and the colonies up to that time, such schools had emphasized the training of new clergymen. The goal of Franklin’s nonsectarian, practical plan would be the education of a business and governing class rather than of clergymen. His ideas found a receptive audience in the prominent men of Philadelphia, who saw a need to prepare young men to lead the government and businesses of their growing city, the largest in the American colonies.

Franklin articulated his educational vision for the Academy and College of Philadelphia in his 1749 essay, Proposals Relating to the Education of Youth in Pennsilvania. Classes in his proposed schools were to be taught in English rather than in Greek and Latin, and the curriculum would include useful subjects such as natural history, geology, geography and modern languages.

Franklin spelled out his aims in concise form in July 1750, in a “Paper on the Academy,” which he placed before the city council of Philadelphia. He hoped the Academy would offer “a good Education at home;” he said that the students would “be qualified to bear Magistracies and execute other public Offices of Trust;” and students “of the poorer Sort” would be “qualified to act as Schoolmasters in the Country, to teach Children Reading, Writing, Arithmetick, and the Grammar of their Mother Tongue.”

In 1751 Franklin penned his “Idea of the English School, Sketch’d out for the Consideration of the Trustees of the Philadelphia Academy” which provided an overview of his preferred curriculum and teaching methods for each of the six classes of the Academy. Students were to begin in the first class with the study of English grammar and spelling and the reading of fables and other short stories. By the sixth class, the young scholars would learn history, rhetoric, logic and philosophy while reading such English authors as Milton, Locke, Addison, and translations of Homer, Virgil and Horace. Franklin asserted that youth educated in this manner would leave the Academy “fitted for learning any Business, Calling or Profession, except such wherein [classical] Languages are required.”

Although Franklin’s vision would be tempered by Provost William Smith‘s dedication to classical languages and by the large number of Anglican trustees in the 1760’s and 1770’s, his ideas were important in shaping Penn as a unique institution. Franklin’s concept of higher education was new in the mid-18th-century western world, but is what a liberal education has now become.

Founding of the Academy, Charitable School, and College of Philadelphia 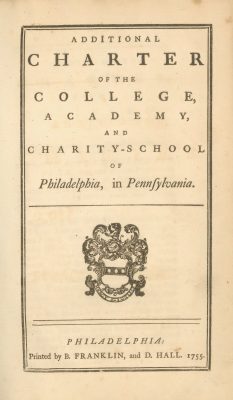 Additional Charter of the College, Academy, and Charity School of Philadelphia, 1755 (version printed by Benjamin Franklin)
Get more image details

Unlike many other colonial American colleges, at Penn, the College was preceded by two schools aimed at younger students, the Academy and the Charity School. The three schools were part of the same institution and were overseen by the same board of Trustees. The Trustees’ Minutes give a firsthand account of how Franklin’s vision played out in these three institutions during the first fifty years of Penn’s existence. The first concrete manifestations of Franklin’s plan were the Academy and Charity School of Philadelphia (as laid out in the 1749 constitution). These two schools opened in 1751 and two years later were granted a charter from the proprietors Thomas and Richard Penn. In a few years the Academy had been successful in producing suitably educated young men interested in pursuing an even higher level of formal education leading to a degree. Thus, in 1755 Ben Franklin and his board of trustees secured a charter for the College of Philadelphia, to be led by Provost William Smith. The Class of 1757 was the first class to graduate from the College.

What we now know as the University of Pennsylvania was created by the constitution, charters and legislative acts of the eighteenth century, beginning with the charity schools and the academy, then the college, then the medical school and eventually a university in two different manifestations.

Penn and its Connections to Slavery

Additional research and reports can be found on the Penn and Slavery Project website.