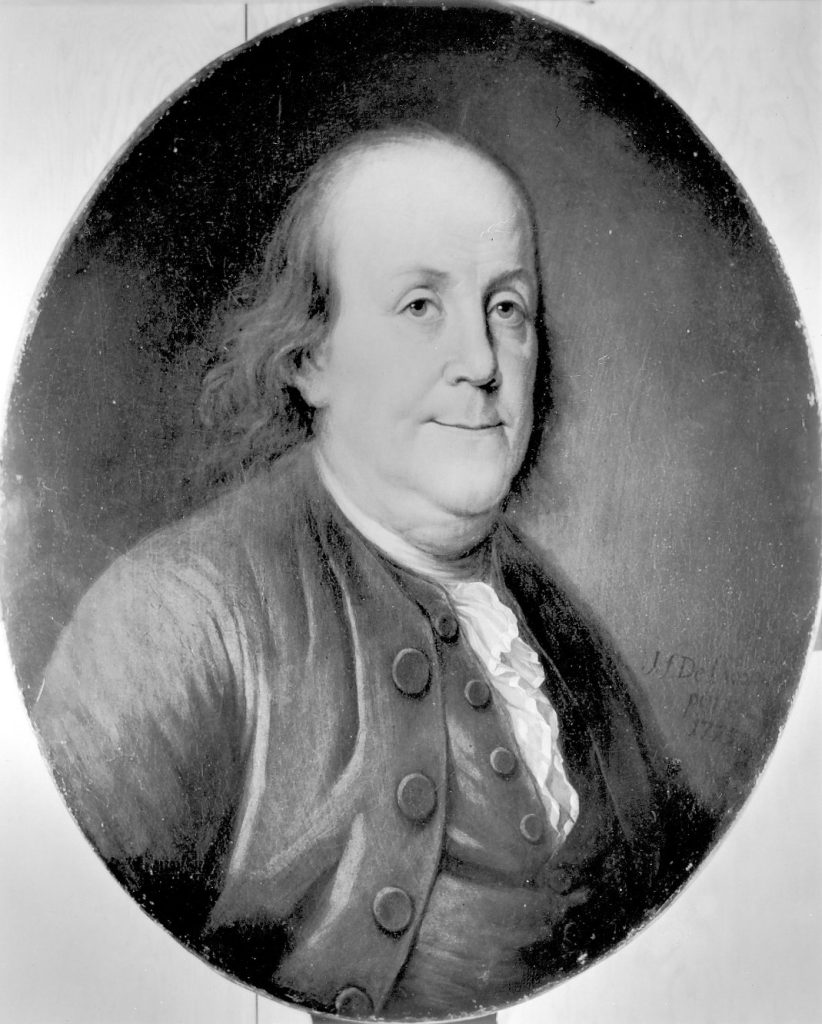 Born in Boston, Massachusetts, in 1706, Benjamin Franklin assisted his father, a tallow chandler and soap boiler, in his business from 1716 to 1718. In 1718 young Franklin was apprenticed to his brother James as a printer. Franklin ran away in 1723, heading for Philadelphia where he worked for the printer Sam Keimer. After traveling to London in 1724 to continue learning his trade as a journeyman printer, Franklin returned to Philadelphia in 1726. By 1730, Franklin established himself as an independent master printer.

Franklin quickly became not only the most prominent printer in the colonies, but the man who shaped and defined colonial and revolutionary Philadelphia. As one who believed in the reasonableness of man and that the phenomena of nature should serve him, Franklin was greatly interested in the improvement of the condition of mankind. Benjamin Franklin was the center of the Junto, an elite group of intellectuals who were at the core of Philadelphia politics and cultural life for some time and who became the basis for the American Philosophical Society. He was also instrumental in the improvement of the lighting and paving of Philadelphia and in the organization of a police force, fire companies, Pennsylvania Hospital, the Library Company of Philadelphia, as well as the Academy and College of Philadelphia.

Franklin was a key political leader at many levels. In 1736 he was chosen clerk of the Pennsylvania Assembly, which position he held until 1751. In 1737 he was made postmaster at Philadelphia. In 1754 he was sent to the Albany Convention where he submitted a plan for colonial unity. He provisioned Braddock’s army and in 1756 was put in charge of the northwestern frontier of the province by the governor. Twice he was sent to London as agent for the Assembly, 1757-1762 and 1764-1775. With the outbreak of the Revolution, he was sent as commissioner to France, 1776-1785, and in 1781 was on the commission to make peace with Great Britain. Franklin was a member of the Continental Congress, a signer of the Declaration of Independence, and a framer of both the Pennsylvania and United States Constitutions. Franklin also served as the American ambassador to France.

Franklin was the primary founder and shaper of the new institution which became the University of Pennsylvania. His 1749 Proposals Relating to the Education of Youth in Pensilvania were the basis of the Academy which opened two years later. Franklin was responsible for the hiring of William Smith as the first provost in 1754. From 1749 to 1755 Benjamin Franklin was president of the Board of Trustees of the College, Academy, and Charitable School of Philadelphia, and he continued as a trustee of the College and then of the University of the State of Pennsylvania until his death in 1790. For most of this period he served as an elected trustee; but from 1785-1788 while president of Pennsylvania’s Supreme Executive Council (the equivalent of governor), Franklin was an ex officio trustee.

After a long and exceptionally productive life in politics, science, and publishing, Franklin died in 1790 in Philadelphia. He is buried in the Christ Church burial ground.