Home » Online Exhibits » Penn in the 18th Century » The College 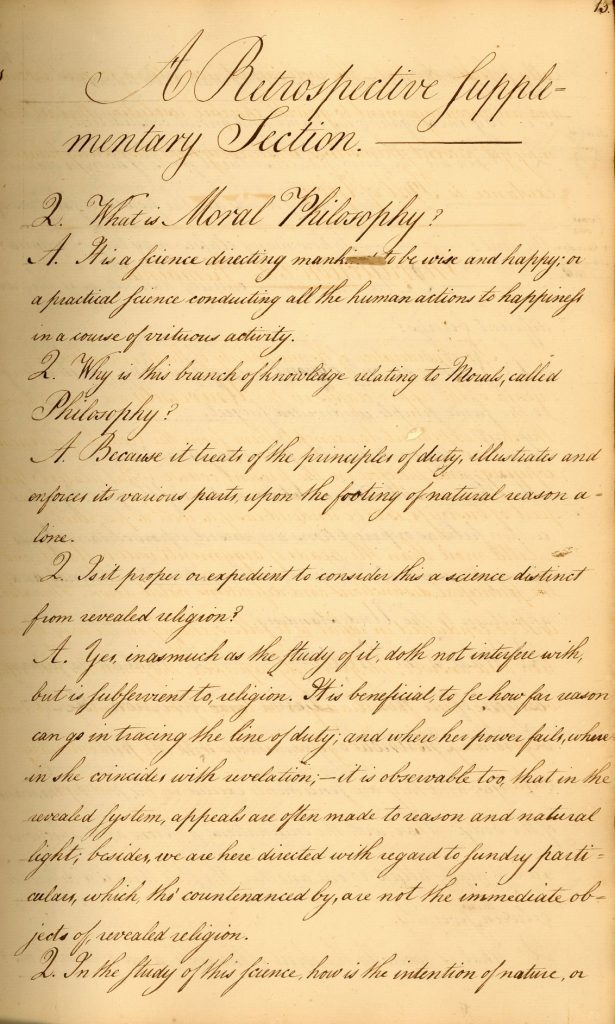 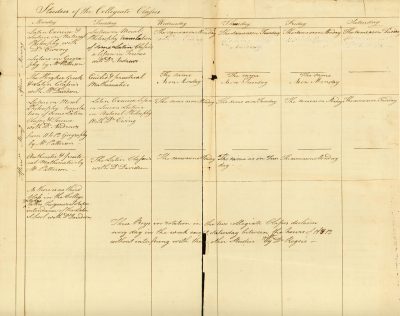 The course of study designed for the College was William Smith‘s crowning achievement. He first envisioned a preparatory tract that would be taught in the Latin School. Preparation for college would include writing, Latin, and mathematics. Smith felt these studies could begin for boys around age nine, and would last several years. Admission to the College was determined after a demanding examination of applicants by the Trustees.

Once in the college, the course of study was designed to be completed in a minimum of three years. After completing the freshman, junior and senior years, students were again examined before receiving their bachelor’s degrees at the commencement ceremony. Each school year was divided into three terms, each of which addressed a new unit. The three year course of study included Latin and Greek, mathematics and natural science (then called natural philosophy), along with ethics, oratory, logic, and history (all grouped together in what was then called moral philosophy). More specifically, the course was designed to sharpen its pupils acumen such that at the end of the three years, students would be able to apply independent thought to whatever situations life might demand. 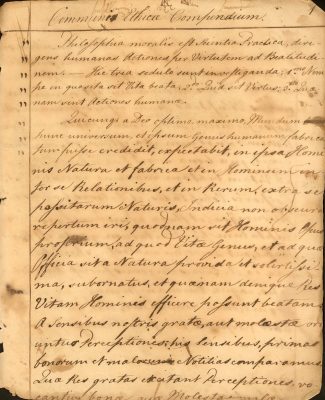 When the school was rechartered in 1779, a new curriculum was put in place. There would still be a preparatory course offered in the Academy, but the college course was to change. There were to be four courses of learning from which the students could choose, which foreshadowed the modern elective system. College students were required to engage as full-time students for four full academic years, at the end of which period they would be granted a Bachelors Degree. Although this was a new direction for the school on paper, in practice there were only somewhat minor changes to Smith’s plan for a course of study. In fact, Smith’s curriculum remained basically intact well into the 19th century.

The pattern of academic life at the College is described in a letter written by William Temple Franklin, Benjamin Franklin‘s grandson, to his father (Franklin Papers, Vol. 48, Part II, No. 145, A.P.S.). As a member of the Junior Class of the Philosophy School (as the College was often called), Franklin explained that for three mornings a week, he studied Latin and Roman history under Francis Alison. The remaining three mornings, he attended classes in Geography, also conducted by Alison. Between eleven in the morning and three in the afternoon, Franklin learned Euclid’s Elements, then taught by Provost William Smith. He was also instructed by the Provost in Mathematics from three until five. At five, after roll call and prayers, there was nothing more to do at the College, and students were free to go home to write an exercise specific to that day of the week. A number of student notebooks surviving from the eighteenth century provide more details on the curriculum of that time.

Although there was some shifting of which topics came under which headings and who taught what, the College still required courses in Greek and Latin, mathematics, moral philosophy, and natural philosophy; modern languages, particularly German, were also offered but not required. At this time Penn College students were also able to enroll in America’s first law course, taught by James Wilson. The course of College study was now set at three years, but with the flurry of new colleges founded at the birth of the republic, competition would lead to low enrollments, financial pressures and compromises at the College of the University of Pennsylvania as elsewhere during the next decades. Age and academic requirements for entry would decline, and students would at some points be granted their college degrees after attending college for only two years.