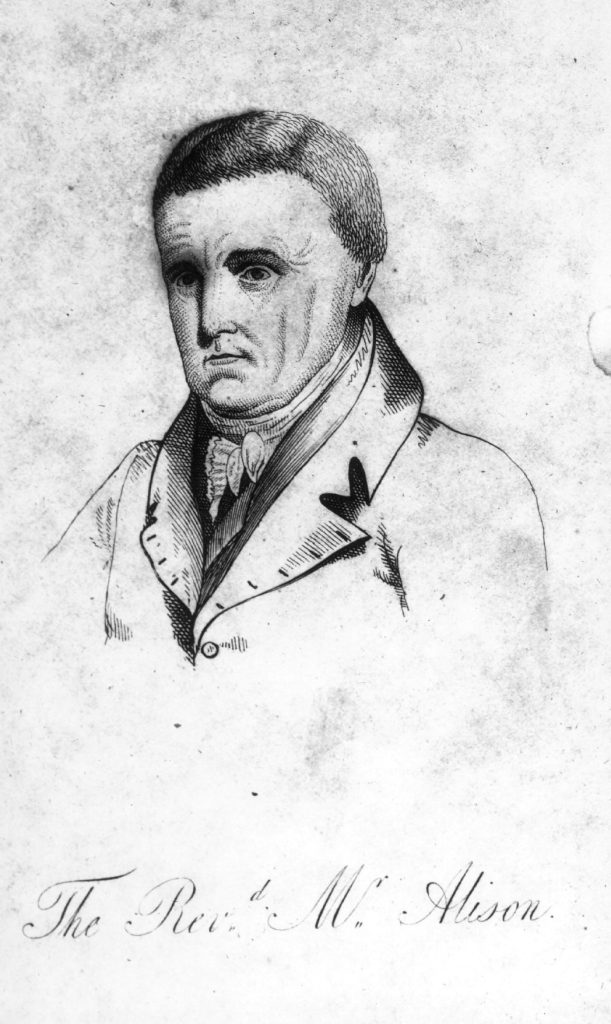 Francis Alison, the son of weaver Robert Alison, was born in the parish of Leck, County Donegal, in Ireland’s Ulster parish. Evidence suggests that he was educated in a clandestine Presbyterian academy, perhaps that of Francis Hutcheson in Dublin. His collegiate education was already advanced when he attended the University of Edinburgh, receiving a master’s degree in 1733. He then studied theology for two years, most likely at the University of Glasgow, since that institution awarded him a doctor of divinity degree in 1756, an honor usually bestowed only on alumni. Alison returned to Ireland where he was licensed by the presbytery of Letterkenny in June of 1735, immediately before he immigrated to Pennsylvania.

In Pennsylvania, Alison was first employed as a tutor in the family of John Dickinson. After he was ordained to the Presbyterian ministry in 1737, he became pastor of a church in New London, Pennsylvania. During this time he married Hannah Armitage. Two of their six children died in infancy; two sons, Francis Alison, Jr. (A.B. 1760) and Benjamin Alison (A.B. 1765, M.D. 1771), attended the Academy of Philadelphia and graduated from the College of Philadelphia — two schools in the institution which became the University of Pennsylvania.

In 1739, Alison opened a classical school for young men in New London. This school offered instruction through the collegiate level. One or two assistants provided instruction in mathematics and science while Alison, known as perhaps the greatest classical scholar in America, devoted himself to the Latin School. At the collegiate or “philosophical” level, Alison taught logic, then metaphysics and ethics and concluded with moral philosophy, a curriculum based on Francis Hutcheson’s book A Short Introduction to Moral Philosophy and correspondence between Hutcheson and Alison. Alison later taught this same course of study at the Newark Academy and then at the College of Philadelphia. Thus Alison introduced Scots-Irish Enlightenment to the American colonies and was the first to offer systematic instruction in this philosophy.

The revivals of the Great Awakening were sweeping Presbyterian congregations during Alison’s first years in America and intensified with the arrival of George Whitefield in 1739. Alison was at first neutral, and then when the synod split in 1741, Alison aligned himself with the “Old Side” against the revivalists. His New London Academy became the official seminary of Philadelphia’s “Old Side” synod from 1743 until 1752. His leadership would be instrumental in bringing about an uneasy reunification of the two sides in 1758.

After the death of David Martin in November of 1751, Alison was asked to leave the New London Academy to take Martin’s place as rector of the Academy of Philadelphia and master of its Latin School. The Anglican trustees of the Academy overcame their reluctance to bring in an Irish Presbyterian with their appreciation of Alison’s uncommon abilities as a teacher of Latin and Greek.

Alison was initially characterized by students as an unsmiling pedagogue who was rarely in good humor. However, throughout his years of service at the College and Academy, he attracted many young men of Presbyterian background as well as those who wished to enter the Presbyterian Ministry. It was due to the representations of Alison and Provost William Smith that the Trustees were induced to apply for the collegiate charter, which was obtained in 1755. In that same year, Alison was given an A.M. by both Yale and Princeton. He became vice provost when Smith made Provost, and remained a much loved and valued teacher until his death in Philadelphia on November 28, 1779.

By 1766, Alison was concerned about both the elitist, Anglican tone of the College of Philadelphia and the intolerance of the “new side” College of New Jersey (later Princeton University) for any “old side” influence. Thus, in 1767, he led his former students in expanding and chartering the academy in Newark, Delaware, which would later become the University of Delaware.

While at Penn, Alison also served as a half-time minister to Philadelphia’s First Presbyterian Church and became active in a number of synod undertakings, including a lending library for ministers and the establishment of the Presbyterian Ministers Fund, the first life insurance company in America. Outside of the church, he was a member and director of the Library Company, a contributing member of the American Philosophical Society, and a founder and manager of the Society for the Promotion of the Culture of Silk.