Katherine Tucker was appointed Professor and Director of the department, a position which she retained until her retirement in 1949. Programs leading to the degree of Bachelor of Science in Education, with majors in nursing education and public health nursing, were offered to graduates of hospital nursing schools. Courses were also offered in Extension Divisions to nurses in eastern Pennsylvania and Delaware. In 1937, a program leading to the degree of Master of Science in Education with a major in nursing education was established. In 1944, the Trustees of the University further authorized the establishment, in the Division of Medical Affairs, of a Basic Collegiate School of Nursing with a five-year basic program leading to the degree of Bachelor of Science in Nursing. Theresa I. Lynch was appointed Director (the title was changed to Dean in 1946). In 1949, Lynch was appointed Director of the Department of Nursing Education, in addition to her responsibilities as Dean of the Basic School. 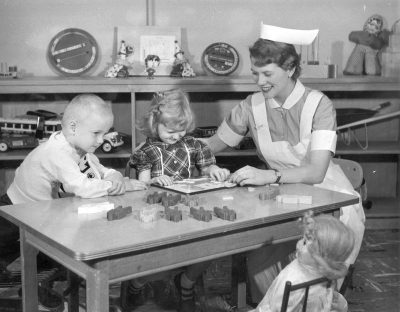