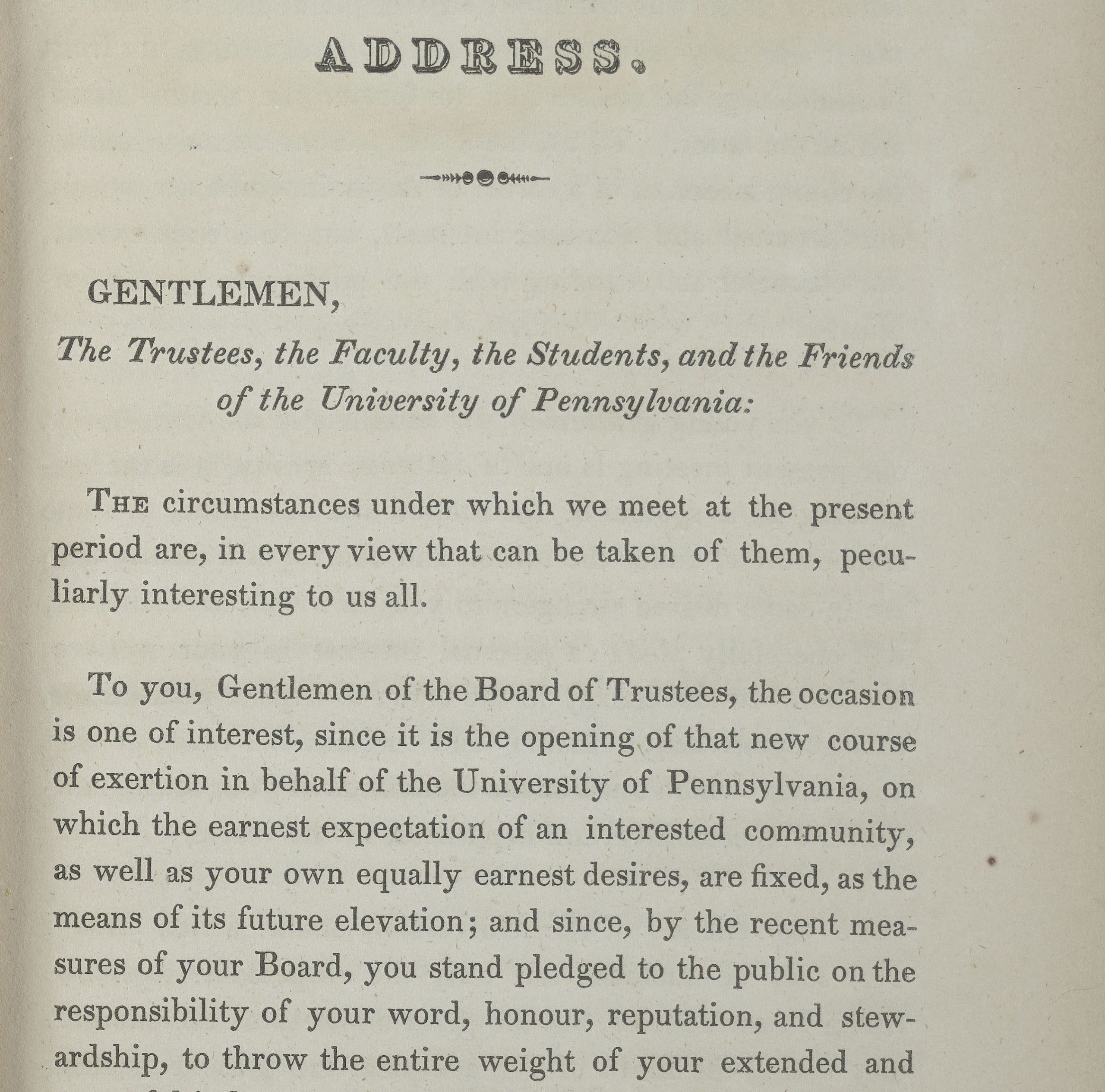 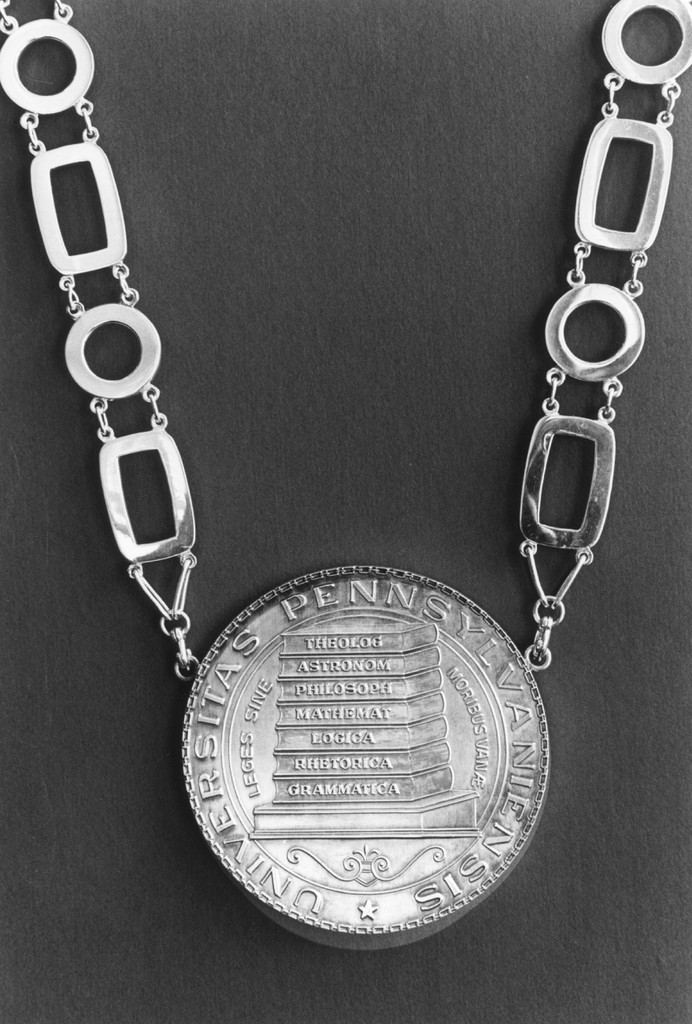 President's badge (with chain), side with official University seal. Designed and created in 1981 for the inauguration of Sheldon Hackney as University President.
Get more image details 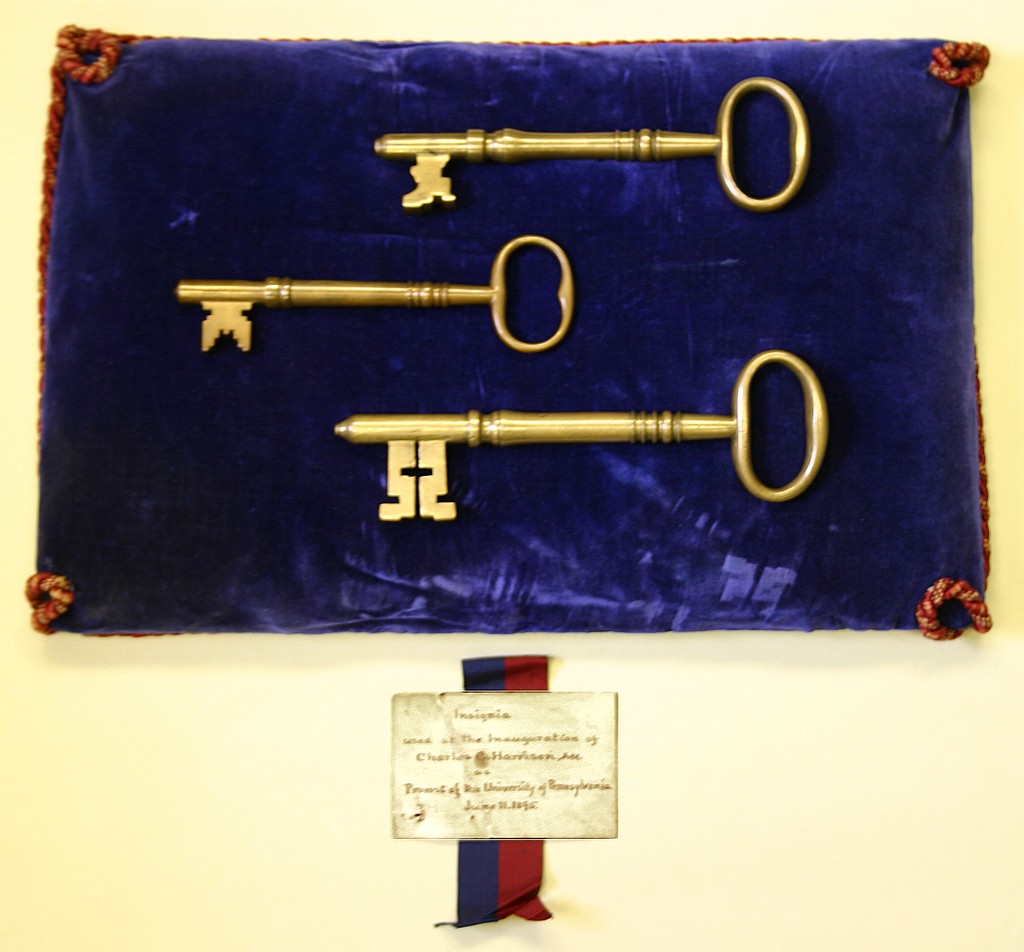 Ceremonial keys to the College. Used for the inauguration of Provost Charles C. Harrison on June 11, 1895.
Get more image details

The inaugurating or installing of the administrative head (Provost before 1930 and President after) of the University of Pennsylvania evolved from a general introduction to the faculty and student body at the University’s opening exercises or commencement to a formal dedicated day with a procession, speeches, and a ceremony of investiture. The first introduction of a new Provost at a public event occurred at commencement on July 4, 1780, when Provost Rev. John Ewing spoke directly to the student body and audience which included members of the Continental Congress, French Ambassador as well as Thomas Paine who received an honorary degree. This was unusual because the Provost usually never gave an address at commencement. This practice would actually be employed again in 1931 and 1970 with Presidents Gates and Meyerson.

With the selection of Rev. John Andrews as Provost, the first moves towards a formal public introduction occurred in December 1810. The Trustees ordered that “the Provost be requested to cause the Faculty, Masters, Tutors and Officers of the University with the Students and Scholars to be convened … and … the Committee [to elect a Provost] … announce the Provost and Vice Provost, now elected.” Andrew’s successor, Rev. Frederick Beasley, was introduced in a similar manner by order of the Trustees except that the introduction occurred at the assembly for the opening of the academic year in September 1813. A member of the Board of Trustees delivered an address.

The selection of the Rev. William Heathcote DeLancey as Provost in August 1828 marked the beginning of inaugurations. As with the previous two Provosts, the Trustees formed a committee to “make such arrangement as they may consider expedient for the opening of the College and introduction of the Provost and Professors to the classes.” The event took place at the opening of the academic year on September 17, 1828, and was also a public meeting of the Board of Trustees. DeLancey delivered an “inaugural address” on the occasion which the Trustees later published.

DeLancey’s successor, Rev. John Ludlow, had the first modern inauguration ceremony in December 1834. A committee of the Board of Trustees made arrangements for it as a distinct event. It was held off campus at the Musical Fund Hall at 808 Locust Street and the “public, parents and guardians particularly … [were] invited to attend.” There was a procession of Trustees, faculty, and students from the 9th Street campus to the Hall prior to the ceremony. Provost Ludlow gave an inaugural address which was later published.

With one exception, the inaugurations of Provosts up to 1895 followed a similar course. In 1881 the inauguration was combined with a Washington’s Birthday (later called University Day) event at which the Provost was inaugurated and U.S. President-elect James A. Garfield given an honorary degree. The investiture ceremony included the handing of ceremonial keys to the Provost. Provost Charles Custis Harrison’s inauguration in 1895 was combined with the June commencement exercises since he was elected to the position earlier that month. Harrison chose not to give an address.

There were no inauguration ceremonies at Penn between 1896 and 1980. This was likely the result of the unique circumstances at the time of the elections of the two provosts and five presidents and perhaps broader societal factors. For example, Edgar Fahs Smith who succeeded Charles C. Harrison in 1911 as Provost, chose not to have an inauguration even though the Trustees gave him the authority to hold one. Smith was a well-respected scientist and scholar who generally preferred his research to grand public events. Thomas Sovereign Gates became Penn’s first modern president in October 1930 after a very difficult period at Penn in the late 1920s and the outset of the Great Depression.

The appearance of new Presidents at Penn was not, however, completely unmarked. Presidents Gates, Stassen, Harnwell, and Meyerson all made what were in effect inaugural addresses at the commencement or opening exercises/convocations closest to the start of their terms.

Today’s form of the ceremony dates from the inauguration of Sheldon Hackney in October 1981. Hackney’s inauguration took place at the Irvine Auditorium with the traditional inaugural address. A special presidential badge or medallion was created and has been worn by Penn Presidents since. The ceremony was proceeded with an academic procession in which the original 1755 Charter of the College of Philadelphia was carried by the Chair of the Board of Trustees. The inauguration came at the end of three days of special events and in the midst of 13 symposia held during that month. Inaugurations from 1981 have generally followed the same format. Beginning in 1994, the passing of the ceremonial keys that first appeared in Provost Pepper’s inauguration in 1881 was revived.