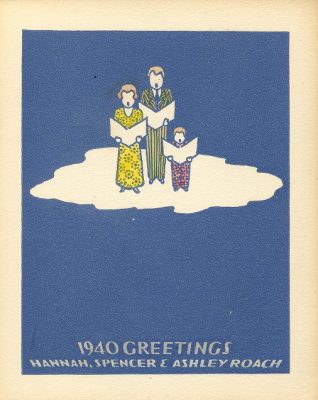 Christmas card, Franklin Spencer Roach and Hannah Benner Roach, 1940
Get more image details
Spencer worked at a number of prominent architectural firms in the city, most notably the firms of Robert Rodes McGoodwin and Harbeson, Hough, Livingston and Larson. He was a member of the American Institute of Architects (AIA), the Pennsylvania Society of Architects and served as Director of the Philadelphia Chapter of the AIA.

Among his clients were the Pennsylvania State University and the Thomas Jefferson University. He also participated in historical restoration projects for the Independence National Historic Park, the Free Quaker Meeting House and Mount Pleasant.

Hannah was associated with the architectural firms of Charles A. Klauder, R. Brognard Okie, Robert Rodes McGoodwin and Harbeson, Hough, Livingston and Larson. In the 1950’s, however, she turned to genealogical research, teaching courses at the Genealogical Society of Pennsylvania and at the World Conference on Records in Salt Lake City. She served as Editor for the Pennsylvania Genealogical Magazine and as a Research Associate for the William Penn Papers.

Return to top
From George and Penny Batcheler »
X