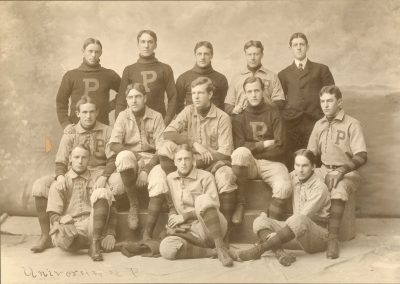 This year Penn baseball had its share of ups and downs. They started off the season just 2-6, including an 0-3 record on the southern trip, but continued their winning ways in May taking 9 straight before dropping a close one to Lehigh on May 30. Solid fielding and hitting in muddy conditions on May 13 and May 27 turned out to be two of the team’s defining games in a year filled with uncertainty. They finished the season with a 14-12 record.

Note that the list of team members varies slightly from source to source. Included here is everyone named in the 1899 yearbook, the Athletic Association history of Penn athletics published in 1913, or both.