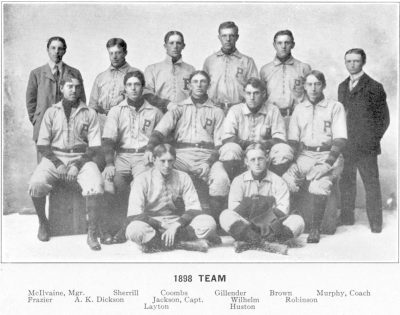 Great pitching and fielding were the keys to victory this season as Penn posted 18 of them out of 24, including a 12 game win streak consisting of an undefeated May (8-0). After this win streak however, the team won only 1 out of their next 4 to end the season. But, despite this late season skid, this team had tremendous talent both individually and as a whole, and was therefore one of the best in history to represent Penn on the diamond.

Note that the list of team members varies slightly from source to source. Included here is everyone named in the 1898 yearbook, the Athletic Association history of Penn athletics published in 1913, or both.