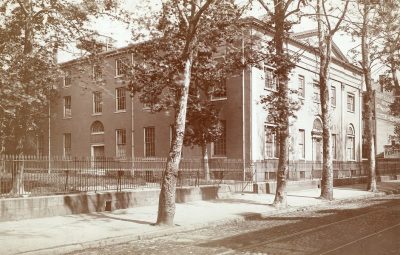 College Hall, Ninth Street, 1870
Get more image details
The American game of baseball first appeared during the early 1800s. The sport had its origins in several European bat-and-ball games, including the English game of rounders, and took a variety of forms in different localities. At first the game was informal with no widely accepted set of rules or organizational framework.

In Philadelphia, the Olympic Ball Club was founded in 1831 and published its constitution in 1838; groups elsewhere formed their own teams and devised their own rules. When, in 1845, Alexander Cartwright published a set of rules for the Knickerbocker Club of New York, these Knickerbocker Rules were widely adopted. The first all-professional (paid) team was the Cincinnati Red Stockings, formed in 1869. Even by 1870, the game of baseball was far different than it is today. Balls and strikes were not a key part of the game, and because it took nine balls before a batter was sent to first base, the action moved slowly. As for equipment, not much was needed beyond a ball and bat. Players attached cleats to their street shoes and shunned protective equipment; they lacked even baseball gloves and were expected to catch the ball with their bare hands.

Baseball was first played by Penn students before the Civil War when the University was still located at its Ninth Street campus. The game was probably played casually by students in the 1850s, but the earliest specific documentation is a reference to a “Base Ball Club” from the 1865 Record, the first senior class yearbook. This baseball club, which played interclass matches only, evidently led a precarious existence for the writer in the yearbook described the club as “… (in) flourishing condition last year (1864), (but) has (since) fallen through. Some of the men now in college ought to take it up again; they will find all the bats, bases, etc. ready for them.” 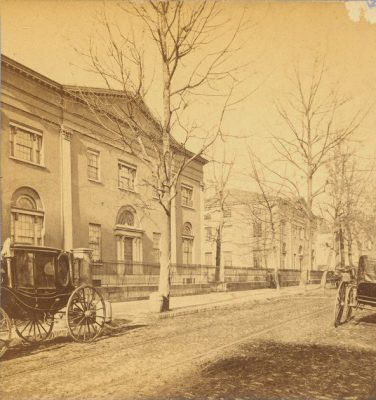 Ninth Street campus of the University of Pennsylvania, Medical Hall and College Hall, c. 1850
Get more image details
During these early years of college athletics, the most common baseball experience for a Penn undergraduate was as a member of a team formed by a class or club. The teams for the various classes, for fraternities, for the Philo and Zelo societies played each other and also teams from colleges or organizations outside of Penn, such as Episcopal Academy or Haverford College.

A representing the University as a whole existed at least as early as 1867. The 1867 Record refers to competition between classes and of “sundry” baseball matches in the fall. This yearbook also provides a list of the members of the “University Nine,” or varsity team, which included young men from several College classes. The members of the earliest teams continued to be drawn from various college classes, but as early as 1872, this all-university team also included a student from the Law School. For most of its first three or four decades this team was best known as the “University Nine;” the term “Varsity” would replace “University Nine” in the 1896 yearbook.

Since space was limited on the Ninth Street campus and the University had no history of involvement in student athletics, there were no campus athletic facilities, no financial support, no staff responsibility for any student sport. Baseball, like all sports on campus at the time, was initiated, organized and paid for by a relatively small student body. Since there was no precedent for the the organization of teams, competitions or funding, a variety of approaches were tried during these early years. The sport waxed and waned according to the enthusiasm of the students at any one time. It was not until after the University’s move to West Philadelphia in 1872, that the playing of baseball by Penn students developed more consistency.

Return to top
« Penn Baseball in the 19th Century
The Move to West Philadelphia, Emergence of the Athletic Association, and Other Changes, 1872-1884 »
X