Thirteen members of the Class of 1815 founded the Philomathean Society on October second, 1813, “for the purpose founding a society for the advancement of learning.” At the time, these thirteen members, many of whom were under the age of eighteen, made up nearly all of the junior class. Within a month, the trustees of the University gave their official sanction to this first official student organization at the University of Pennsylvania. Provost Frederick Beasley quickly gave his enthusiastic support as well. 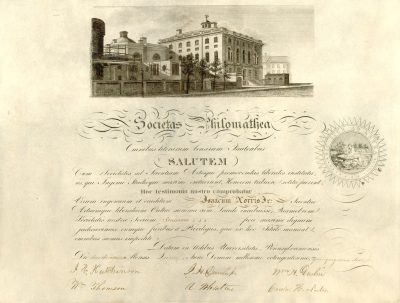 At the first meeting of Philo (as the Philomathean Society is commonly called), the members decided to elect a “Moderator” and a “Censor Morum” as their officers. The first Moderator was Christian Crusé. By the second meeting, an organized structure began to take a concrete form, as well as such practices as fining those who had not participated or who were in need of reprimand. The society turned to the works of Virgil to select their motto, sic itur ad astra, translated as “such is the way to the stars.” In these early years, Philo’s role was seen as the encouragement of literature and rhetoric.

The society’s meetings were held every Friday in a room assigned to them in what was then the University’s one campus building, known as the “President’s House.” Philo’s archives and library, also housed in this building, came to include some of the most revered names and publications of contemporary times and soon rivaled the University library in size.

During these early years, debates involved members of Philo debating each other on various selected issues. Most topics involved hypothetical situations; one of the earliest debates revolved around the question of whether or not women should preach. Many future lawyers honed their linguistic and rhetorical skills in these debates. For example, Henry D. (Henry Dilworth) Gilpin (1801-1860), who was impeached as Philo moderator in a trial lasting from October 1817 to February 1818, later went on to be appointed in 1831 as U.S. District Attorney for Philadelphia and then to serve as United States Attorney General in 1840 and 1841, under President Martin Van Buren.

An Expanded Campus and the Emergence of a Rival Organization, 1829-1871

In 1829 the University of Pennsylvania tore down the President’s Mansion and built in its place two new buildings designed by William Strickland, one for the Medical Department and the other for the Collegiate Department. Philo was awarded two rooms in the College building, while an adjoining the room was given to the newly formed Zelosophic Society. Competition immediately developed between “Zelo” and Philo. As can be seen in documents from this era, sometimes this competition encouraged a higher level of student sponsored learning, but other times the rivalry became fierce, involving not only competition for members and space, and even occasional vandalism on the opposing society’s property.

The existence of Zelo offered the potential for Philo’s members to debate not only each other, but also students from another Penn organization. In 1847 the first joint debate between Philo and Zelo addressed the topic of “whether or not the execution of Charles I was justifiable.” The debate was deemed a tie and the mixed teams went home satisfied with a job well done. As the Civil War approached, the two societies addressed the topic “Is it probable that the abolition of slavery will be attended by the dissolution of the union?” The moderator opened this debate with great drama by placing two pistols on the table. 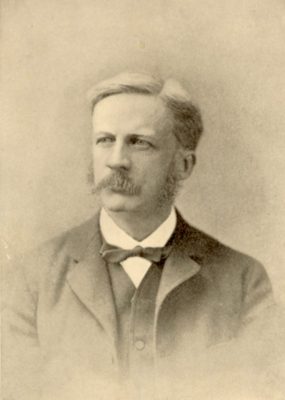 Henry Morton, c. 1875
Get more image details
Philo’s interests during this period were not limited to the promotion of debate. During these years Philo encouraged its members to develop their own literary skills; it was common practice for members to circulate amongst themselves their own literary works, written in longhand. The Society also reached out to a wider audience. The Philomathean Review, which appeared as early as 1828, contained poetry, sketches and then humorous satire. In 1838 Philo sponsored a lecture series by William Read, the first course in American History offered at the University of Pennsylvania. Philo celebrated its fiftieth anniversary on October 6, 1863, with a series of addresses celebrating the society and its accomplishments.

The most notable achievement for the Philomathean Society in its first fifty years was the 1858 publication of the Philomathean Rosetta Stone Report, the first complete English translation of the Rosetta Stone. Philo members Henry Morton (pictured here), Charles Hale, and S. Huntington Jones took nearly a year to complete this work. Their work met with worldwide praise and recognition, resulting in such high demand that publication quickly went into a second edition.

The Impact of the Move to West Philadelphia and the Expanding University, 1872 to World War I

In 1872, when the University moved from Ninth Street to its new West Philadelphia campus, a fourth floor of College Hall was built especially to house the Philomathean and Zelosophic Societies. As the University’s curriculum and student body expanded in the last quarter of the nineteenth century, Philo took on new activities. 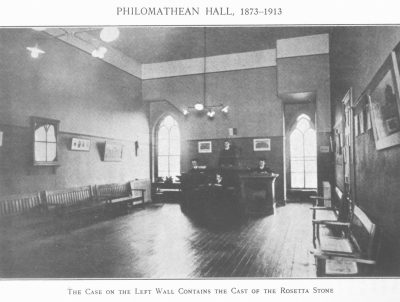 The University Magazine was founded in the fall of 1875 by members of Philo as Penn’s first student news publication. This magazine provided a faithful record of events at the University on a monthly and then a semimonthly basis. It laid the ground work for and then merged into the Pennsylvanian, the student newspaper begun as a University-wide endeavor in 1885 which continues today as the Daily Pennsylvanian. Through these ventures, the Philomathean Society is also accredited as contributing to the eventual rise of the College of Journalism. Later, in 1899, Philo would play a similar role in the founding of Punchbowl, the University of Pennsylvania’s magazine of humor. 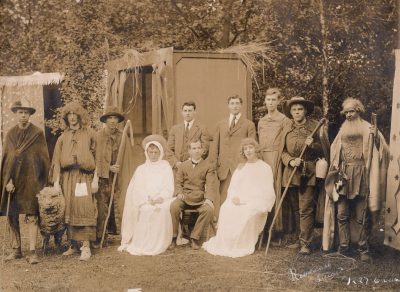 By the end of the 19th century, the Philomathean Society again decided to spread its wings into other realms of artistic expression by putting on plays independent of other societal influence. In 1909 the Society gave its first play under their own charge titled, “Second Shepherd’s Play;” it was a great success and would give way to many future productions.

Debating, still Philo’s primary activity, now expanded beyond the University. The annual Philo-Zelo Debate, now often attracting thousands, moved off-campus to Musical Fund Hall and other such forums in and around. Philo also challenged societies of other colleges like the Philolexian Society of Columbia University and others like it at Haverford and the University of North Carolina. In 1894, the Philomathean Society joined with many teams from other such schools to establish the first “Intercollegiate Debate Union” in the United States. That same year, as was the case with the newspaper, the Society yielded its monopoly position and organized the University Debate Council which was opened to all undergraduate students. 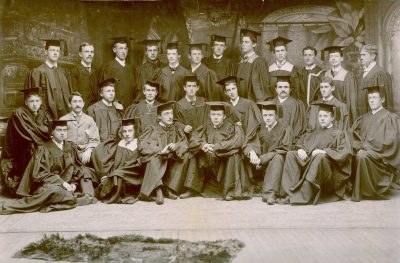 Due to the proliferation of student organizations, by World War I the Philomathean Society was no longer the predominant student organization at Penn. Members of Philo continued their leadership roles in debate, drama and literary pursuits, even though their preeminence was challenged by changes in the University and in the larger society. In spite of setbacks, Philo would survive as an innovative force in the life of the University, which has been its most enduring tradition since its inception.

Members of Philo took an active part in matters vital to the University community, such as the defense of students’ and teachers’ rights, and to bring many questions and concerns of the students to the forefront of University politics. Philo had a hand in addressing numerous major issues relating to curriculum requirements, university policies and political restructuring. No topic from religion to war, racism to equality went unheard by the members of the Society. 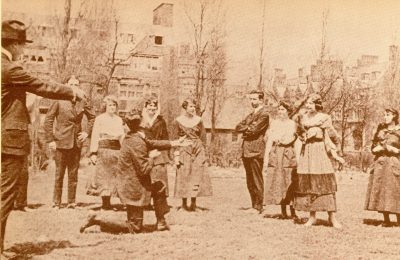 During the second and third decade of the twentieth century, Philo’s theatrical productions became more elaborate, even including, in 1916, a full-scale reproduction of the Globe Theater on Hamilton Walk. The following year the Society staged a production of the “Masque of the American Drama” in Penn’s Botanical Gardens; it was received, not only by the university but the nation, with great praise and adoration. After watching the play, one writer stated that, “for the first time art, like athletics, became a university activity and a medium to unite a whole community.” 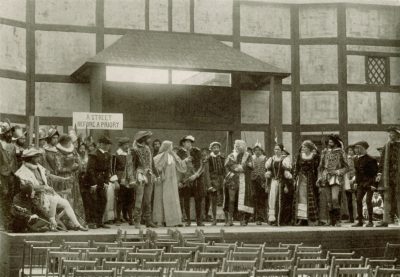 Unfortunately these accomplishments could not save the Philomathean Society from declining in size and influence from the late 1920s through World War II. By the 1920’s the liberal arts tradition of undergraduate college education was challenged by specialized, professionally oriented curricula. This was particularly true at the University of Pennsylvania where business, technical and scientific education was most favored. Thus, as a means to increase membership and become more all-inclusive as an institution, Philo allowed students from any school to be allowed membership, except of course for women who remained excluded until after World War II.

More setbacks followed. In 1927 the Philomathean Society suffered a huge blow when it was asked to vacate its place of meeting in College Hall. Philo’s move to smaller quarters in Houston Hall subjected the Society to the decisions of the building’s director, who did not permit Philo to continue many of the activities that had made membership such a rewarding experience. The onslaught of the Depression also hurt the Society as lack of funds led to a loss of programs and membership within the group. Then, during World War II, as Philo membership levels fell to an all time low, the Philo moderator placed the Society’s archives in the University Library for safe keeping. Indeed, many faculty members and students alike believed that the Society had simply disbanded. 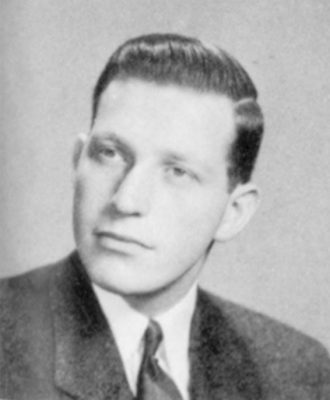 Charles Fine Ludwig, 1953
Get more image details
With the conclusion of the war, however, came a plethora of new students, mainly war veterans, who brought with them the curiosity, maturity and desire to learn that many before them had not possessed. The result was a postwar revival of the Philomathean Society that helped to restore Philo to its place of prominence on campus as well.

Most of this revival was thanks to the efforts of Charles F. Ludwig who, as moderator, called for the reinstitution of many policies and activities that had been lost and the creation new ones. He was responsible for the resumption of formal meetings and for the reclamation of Philo’s archives. As an honor to him and all that he did, the title Censor Emeritus was created as an honor given to a departing officer who best exemplifies the Society’s goals.

By the mid-1950s, with perseverance and help from alumni, the Philomathean Society secured space in Hare Hall (on the site of present-day Williams Hall) to house their now extensive library, archives and numerous other historical artifacts. In 1969 Philo finally returned to their quarters on the top floor of College Hall, now restored to its nineteenth-century appearance. 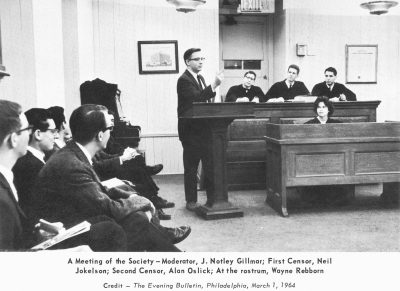 Since the 1950s, Philo once again increased its realm of activities. The Society has benefited the University of Pennsylvania community with its devotion to the arts and its desire to give students to as much literary exposure as possible. The members of Philo organize lecture series, plays, ebates and discussions so that students may continue to learn and use the skills held in such high regard by previous members. The University will forever be indebted to this organization for its contributions in the fields of literature, journalism, drama and history. Without the foresight and determination of those thirteen original founders, some of the greatest leaders in Pennsylvania and American history might not have been able to reach their potential as leaders in their respective fields, embodying the motto of this Society, sic itur ad astra.

Return to top
Biographical Sketches of the 13 Founders »