Penn was growing and maturing in other areas which supported the intellectual reputation. Graduate studies remained essential to Penn, if it was to be regarded as a top-flight research institution. The graduate program at Penn in 1970 consisted of programs from the departments of Arts and Sciences. Until the 1960s, these programs were very small in comparison to the rest of the school. Many of the graduate programs were considered superfluous if one wanted to become a professional because all one needed was a bachelor’s degree in the respective area. But times were changing and as education was routinely continued after college, so did the University’s graduate program expand. The two most significant growths and transitions occurred in the 60s. 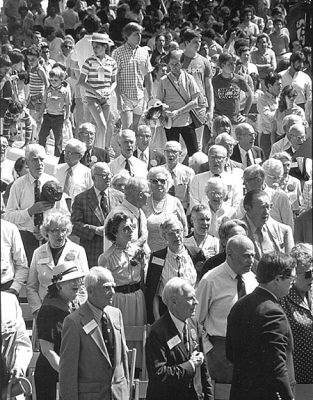 “Alumni Day”, the mingling of two generations at the Wharton School, mid 1980s

The first was in 1962, when the Arts and Sciences program grew to more than triple its previous annual enrollment capacity. Most of the other programs of that year remained relatively stable in terms of enrollment figures, except for the Wharton graduate division which grew by 21%.

The second notable growth coincided with the decline of the Wharton undergraduate division, and that was the enrollment in Wharton’s graduate program, of people seeking the Master’s in Business Administration degree. Cynthia Graham, the Assistant Director of Wharton Graduate Admissions in 1973, attributed this growth to the fact that, “An undergraduate degree alone can’t get you into the upper management jobs. An M.B.A. will open many doors.” This application rush occurred between 1962-1968, during which Wharton grew 250% of its size; a number which generally had not fluctuated since the late 1940s.

These developments also enhanced Penn’s academic status along. In much the same way that Penn would redraft their undergraduate admissions standards, it would also make their graduate programs quite competitive. By using the same technique employed in the undergraduate departments, Wharton and the Arts and Sciences could then became more selective. As applications flowed in, the standardized test scores rose.

The academic departments of the University were quite eager to assist the process of image augmentation at Penn. In 1959, the bachelor’s degree in architecture, previously offered by the school of Fine Arts, was abolished. All undergraduate architecture-based classes were moved the Arts and Sciences sector, as the [undergraduate] School of Fine Arts became a the Graduate School of Fine Arts. This was important because it not only decreased the number of students in the professional school but it also fed more students into the college.

Two of Penn’s undergraduate professional schools had been canceled and the famous undergraduate business program was losing most of its enrollment to post-graduates attending business school after college. Penn was changing internally and inconspicuously, adjusting the structure of its programs to fit its new aspiring image; but simultaneously, the University began to change more overtly and visibly, which was literally apparent by the faces of its students.

Return to top
« Part 6: Demographic Changes and the Beginnings of Recruitment
Part 8: Financial Aid and Diversity of the Student Body »
X