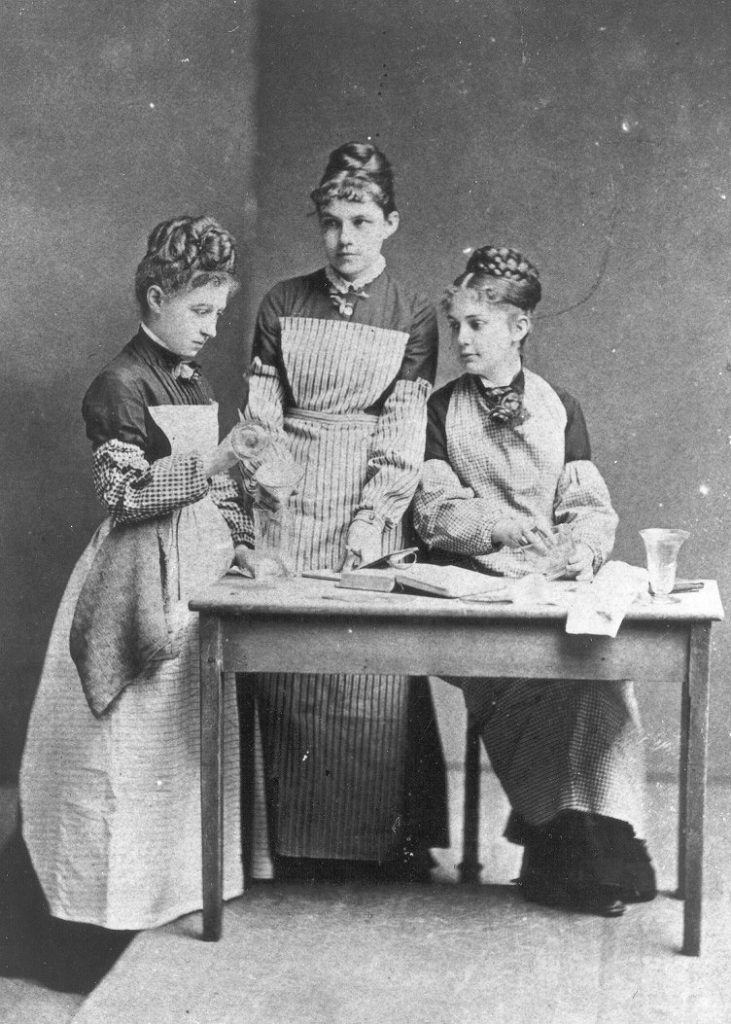 Women were always present in the student body at Penn, but at first only in the Charity School for children, not in the College or professional schools. When the Charity School was closed in 1877, the free instruction it offered was converted to ten full-tuition scholarships in the College, open to men and women alike. The College faculty and Trustees, however, were united in the opinion that Penn should not be a co-educational institution. The result was the admission of women in the Towne Scientific School as “special students,” eligible to earn certificates, but prohibited from earning an undergraduate degree. Not until the establishment of the School of Education in 1914 did Penn confer its bachelors degree on women and two more decades were to pass before the creation of the College of Liberal Arts for Women in 1933 permitted women to take the traditional liberal arts curriculum. The following presentation celebrates pioneering women at Penn, not only in the Towne Scientific School of the 1870s, but also in the Law School, the Graduate School of Arts and Sciences and the other graduate and professional schools of the University. 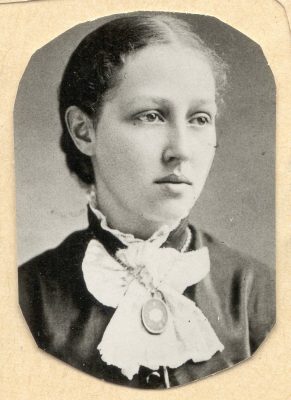 Gertrude Klein Pierce Easby, c. 1878
Get more image details
Gertrude Klein Peirce and Anna Lockhart Flanigen met at Women’s Medical College. The two women were the first female students admitted to the University of Pennsylvania. Miss Peirce earned a certificate of proficiency in Chemistry in 1878. She continued her studies in a post-graduate course in 1878 and 1879. She was co-author with Dr. Edgar Fahs Smith, of a paper on the products obtained in the Nitration of meta Chlorsalicylic Acid. In 1884 Gertrude Peirce married Francis Easby. She maintained an active interest in social concerns, settlement work, and remained a proud alumna of the University until her death at the age of 94.

A native of Altoona, Pennsylvania, Mary Thorn Lewis entered the University of Pennsylvania in 1878 and earned a certificate of proficiency in Chemistry in 1880. She was active in the New Century Club and the New Century Guild for Working Women while in Philadelphia.

Mary Lewis married William Channing Gannett, a Unitarian minister. She described her life as that of “a busy minister’s wife & mother of a family with civic and philanthropic interests — especially the movement for granting equal political rights & duties to women –.” A close friend of Susan B. Anthony’s, Mary Lewis Gannett supported the suffragist leader’s efforts to establish a college for women at the University of Rochester. 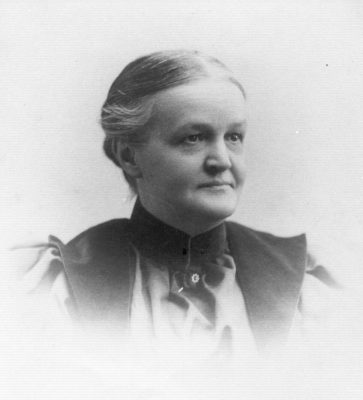 Emily Lovira Gregory, c. 1890
Get more image details
Born in Portage, New York, Emily Lovira Gregory taught school until, at the age of thirty-five, she entered Cornell University (B.A. 1881). After obtaining a doctorate in botany at Zurich, she took the position of teaching fellow in the department of biology at the University of Pennsylvania, thereby becoming the first woman faculty member as well as one of the earliest to give instruction at any but a women’s college. She was appointed lecturer at Barnard College the second year of its existence, and she played an active part in championing the cause of graduate students and encouraging laboratory assistants by paying them out of her own funds. She died at the age of fifty-six, two years after becoming the first woman professor at Barnard College. 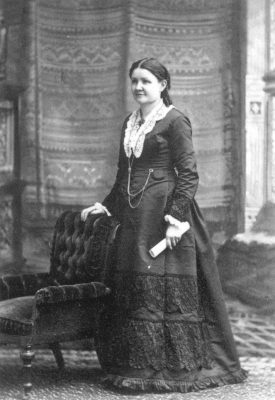 Caroline Burnham Kilgore
Get more image details
First woman to gain admission to the law school and to receive the LL.B. (1883). Born in Vermont, orphaned at twelve, she financed her own education by teaching and domestic work. Admitted to the Bellevue Hospital clinics, she became the first woman to receive a medical degree in the State of New York (1865). In Philadelphia she taught in a “French School for Young Ladies” and began studying law with Damon Kilgore, whom she married after entering into an “ante-nuptial contract.” After graduating from law school she was admitted to the Orphans’ Court of Philadelphia and to the state Supreme Court and all the lower courts after an act of the legislature (1885), whom she had addressed on the admission of women several years earlier. She was admitted to practice before the United States Supreme Court in 1890. A year before her death she was the only woman passenger in the first balloon ascension of the Philadelphia Aeronautical Recreation Society. 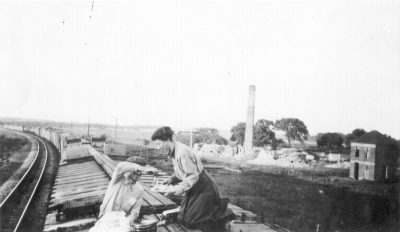 Bacteriologist, chemist and authority on refrigeration as a food preservative, Mary Engle Pennington earned a certificate of proficiency from the Towne Scientific School of the University of Pennsylvania in 1892 and her Ph.D. in chemistry from the University in 1895, at the age of 22. She held a post-doctoral fellowship at Yale University in 1896. In 1898 Dr. Pennington established the Philadelphia Clinical Laboratory. Her research with bacteria led to methods for preserving and safeguarding milk that were soon adopted universally. As chief of the U.S. Department of Agriculture Food Research Laboratory, Dr. Pennington, devised methods of preserving and handling perishable foods that were adopted by the food handling industry and set the standards for railroad refrigerator cars. After leaving government service in 1919, Dr. Pennington continued her career as a consulting refrigeration engineer for more than thirty years. In 1940 she received the Francis P. Garvan medal, the highest award to women of the American Chemical Society.

A founding member of the Archaeological Association of the University of Pennsylvania (1889), curator of the Egyptian and Mediterranean sections of the archaeological department (1890-1905), and prominently associated with raising funds to build the University Museum. Born in Paris, Sara Yorke Stevenson lived in France and Mexico before settling in Philadelphia. Author of numerous articles on archaeology, she also wrote a book entitled Maximilian in Mexico (1899), and was literary editor of the Public Ledger. She was the first woman to be awarded an honorary degree at the University (Sc.D. 1894). 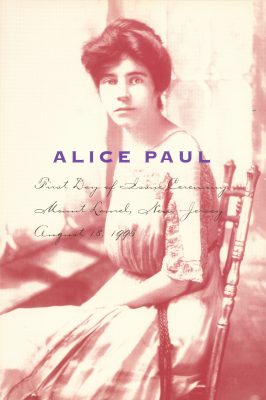 Alice Paul, cover of program for first day issue ceremony of her postage stamp, August 18, 1995
Get more image details
Alice Paul was educated at Swarthmore and the University of Pennsylvania, where her 1912 doctoral dissertation was written on the legal position of women in Pennsylvania. She later earned law degrees from Washington College and American University.

Paul also studied economics and sociology at the universities of London and Birmingham. While in England she was active in the Women’s Social and Political Union and was arrested and jailed repeatedly as a participant in the campaign for women’s rights led by Emmeline Pankhurst and her daughters, Christabel and Sylvia.

Returning to the United States in 1910, Paul was appointed chair of the Congressional Committee of the National American Woman Suffrage Association in 1912. In June 1916, Paul founded the National Woman’s Party, its sole plank a resolution calling for immediate passage of the federal amendment guaranteeing the enfranchisement of women. In 1923, the National Woman’s Party introduced an Equal Rights Amendment to Congress, authored by Alice Paul.

Papers and biographies of other notable alumnae: