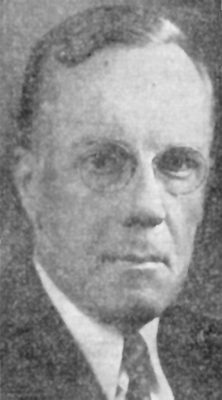 Walter Thompson Karcher (1881-1953), B.S. 1901
Get more image details
Walter Thompson Karcher drew the sketch of the archway at the School of Veterinary Medicine which appears on the University of Pennsylvania Bicentennial Wedgwood China plate. Karcher was born in Philadelphia in 1881 and attended Northeast High School in this city. At the University of Pennsylvania, he earned the degree of Bachelor of Science in Architecture (B.S. in Arch.) with the Class of 1901.

One Karcher’s first jobs after leaving Penn was in New York City as one of the designers for the Louisiana Purchase Exposition. After that job was completed, he moved back to Philadelphia to work in several architectural firms, including the offices of Price & McLanahan and of John Torrey Windrim. In 1905 Karcher won the University’s Alumni Traveling Scholarship and used it to study in Rome and Paris, where he studied in the Atelier Duquesne of the Ecole des Beaux-Arts.

When he returned to Philadelphia, he worked in the offices first of Price & Lanahan and then of Horace Trumbauer for several years. In 1910, he partnered with Penn classmate Livingston Smith to begin the firm Karcher and Smith, a firm that would last until Karcher’s death in 1953. During his career, Karcher designed buildings on the campus of Swarthmore College,the Philadelphia Naval Hospital, and served as the president of the Philadelphia Chapter of the American Institute of Architecture. 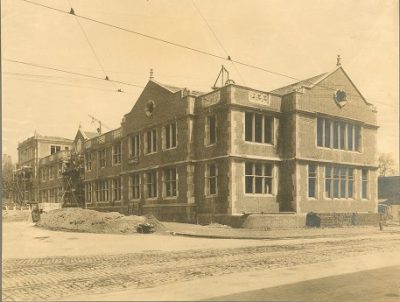 Veterinary School, construction, 1907
Get more image details
The Veterinary Archway is a part of what is now known as the Veterinary Medicine Old Quadrangle. Built between 1902 and 1913, the building consists of four wings with an interior quadrangle; each of the wings was originally intended to be used by a different portion of the school.