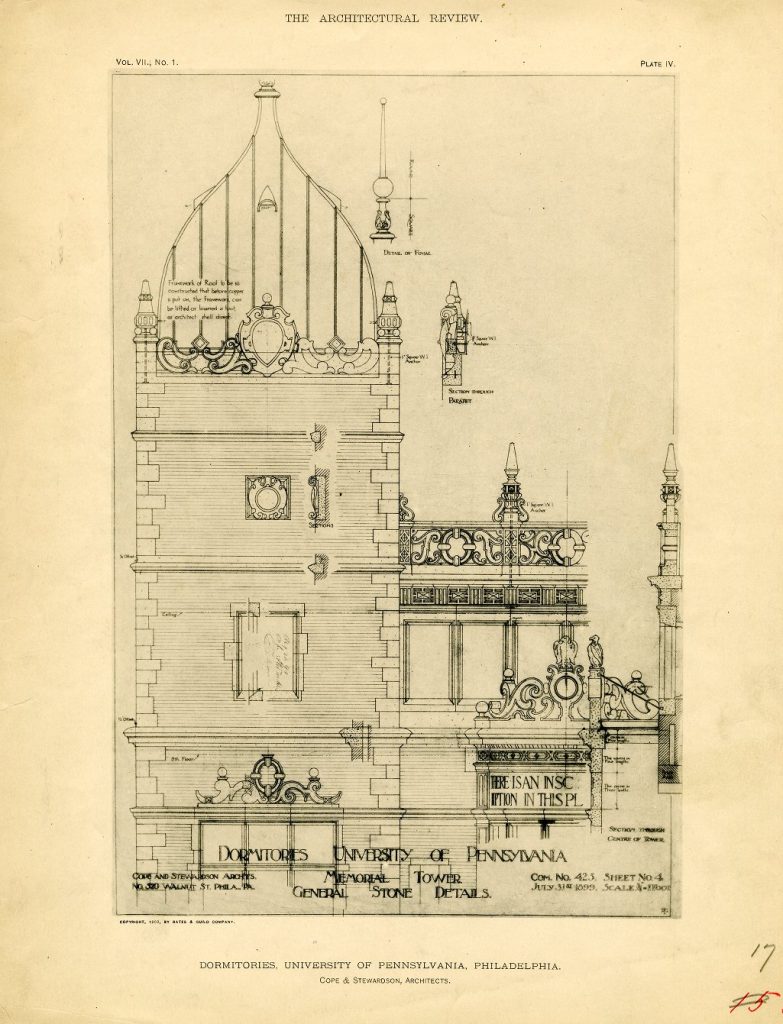 Walter Cope was born in Philadelphia in 1860. After attending Germantown Friends School, Cope opted to learn architecture in the office of Addison Hutton, who designed buildings for Lehigh University and Bryn Mawr College. His next position was in the firm of Theophilus Parsons Chandler. Following a brief stint in 1883 as a student at the Pennsylvania Academy of Fine Arts under Thomas Eakins and Thomas Anshutz, Cope in 1884 undertook extensive travel in Europe to observe architecture.

When Cope returned to Philadelphia in 1885, he formed the firm of Cope & Stewardson with John Stewardson, who had been both a childhood friend and a fellow architect in Chandler’s firm. In their first five years together, Cope & Stewardson designed more than two hundred buildings, attempting to correctly apply past styles for modern needs. The partners became masters of Collegiate Gothic style, greatly influencing American collegiate architecture with their designs for buildings at Bryn Mawr College, Princeton University, Washington University in St. Louis, and the University of Pennsylvania.

Walter Cope was affiliated with the Cope & Stewardson firm in one capacity or another when it designed these buildings on the University of Pennsylvania campus, in the English-Gothic, Romanesque, and Italian Renaissance styles of architecture:

Cope was on the faculty in the Graduate School of Arts and Sciences at the University of Pennsylvania from 1892 until 1902. Cope also designed public institutions, churches, and private homes. He was a fellow in the American Institute of Architects and a founding member of the T-Square Club, later serving as its president. Following the death of his partner and friend, John Stewardson, Cope served as the manager of the John Stewardson Memorial Travel Scholarship.