Grant Miles Simon (1887-1967), B.S. 1911, M.S. 1911
Get more image details
Grant Miles Simon drew the sketch of the Class of ’93 Gateway which appears on this University of Pennsylvania Bicentennial Wedgwood China plate. Simon was born in Philadelphia in 1887 and graduated from Philadelphia’s Northeast Manual Training School in 1904. His education in architecture took several forms, all influenced by Paul P. Cret. Simon began studying architecture by taking several classes, under Cret’s patronnage, in the T-Square Atelier at the same time he worked in Cret’s firm of Kelsey and Cret. He matriculated at the University of Pennsylvania in 1907, during the period of Cret’s influence on the University’s architecture program. While a student at Penn, Simon won the Cope Memorial Prize, the Alumni Scholarship three years in a row, the Stewardson Traveling Scholarship, and the Arthur Spayd Brooke gold medal. He earned the degrees of Bachelor of Science in Architecture (B.S. in Arch.) and Master of Science in Architecture (M.S. in Arch.) in 1911.

From 1907 until 1909, Simon also studied painting at the Pennsylvania Academy of Fine Arts under artist Thomas Anshutz. He became an accomplished painter and lithographer as well as an architect.

After graduating from the University, Simon was hired by the firm of John Torrey Windrim. Simon remained an employee of this firm until 1913 when he won the Paris Prize and traveled to France to enter the Atelier Bernier of the Ecole des Beaux Arts. When he returned to Philadelphia he joined the firm of his older brother, Edward P. Simon. In 1927, the younger Simon withdrew from the firm (which had become Simon and Simon in 1918); from then until his death in 1967 he worked independently. His buildings included such Philadelphia landmarks as the Fidelity Bank on South Broad Street. Simon was awarded a number of prizes near the end of his life in honor of his contributions to architecture in the Philadelphia area. He led the Philadelphia Historical Commission from 1956 until his death, and used that post to certify over one thousand buildings in Philadelphia as historic structures. He also played an important role in both Historic Germantown and Independence National Historic Park. 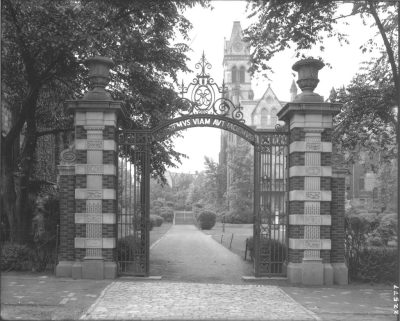