William Herbert Chandlee Jr. drew the sketch of the Presidential Mansion which appears on this University of Pennsylvania Bicentennial Wedgwood china demitasse cup. He was born in Philadelphia in 1904, where he attended Frankford Friends School and then William Penn Charter School, graduating in 1922. His college years were spent at the University of Pennsylvania from which he earned the degree of Bachelor of Science in Architecture in 1926.

Following graduation Chandlee went to work in the architectural firm of his former professor, Paul P. Cret. While working in Cret’s firm, Chandlee helped with the design of the Delaware River Bridge (later renamed the Benjamin Franklin Bridge), buildings for the American Battle Monuments Commission, and the Rodin Museum, as well as several buildings on the campus of the University of Texas. He left Cret’s firm in 1943 to become the architect for the Railway Division of the Budd Company where he was in charge of designing streamline luxury trains. In 1962 he opened his own architectural firm. 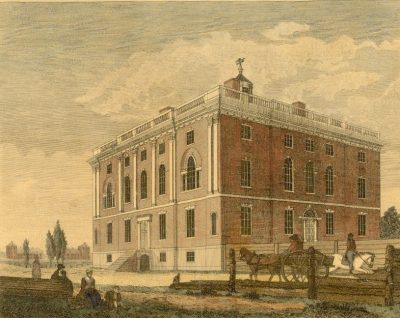 President’s House, Penn’s campus from 1801-1829, at Ninth and Market Streets
Get more image details
In 1792, William Williams was commissioned to construct a residence for the President of the United States in the City of Philadelphia; construction was finished in 1797. Since Washington D.C. was made the national capital, with the White House as the residence of the chief executive, this Philadelphia President’s house was never used by a president. Instead, Williams’s building was purchased by the University of Pennsylvania. After redesigns by Benjamin Henry Latrobe, the house served as Penn’s second campus. From 1801 to 1828 the University’s College and Medical School were both housed in this building, located near the intersection of Ninth and Market Streets. Less than three decades later, the building was no longer adequate for the University’s needs. It was demolished in 1828 to make way for two new buildings, designed by William Strickland, on the same site.