Women’s Hey Day was first celebrated in 1926, six years after the passing of the nineteenth amendment which gave women the right to vote. The ceremony, usually held in Bennett Hall, consisted of an academic procession, the changing of offices, a valedictorian address, as well as the induction of new members into various honor societies. Although women were not eligible for the Spoon, Bowl, Cane and Spade Awards, they had their own senior honors, which included the following awards: 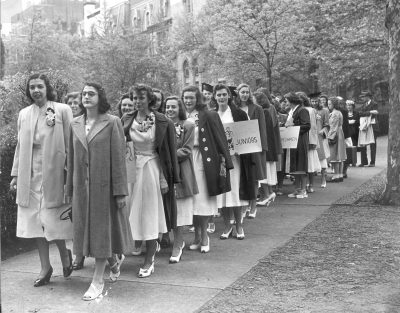 The first honors award among senior women is named for one of Penn’s great pioneers in women’s education. Althea Kratz Hottel earned three Penn degrees (B.S. in Educ., 1929; M.A. in Sociology, 1934; and Ph.D. in Sociology, 1940) and served as Directress of Women, 1936-1943 and then as the first Dean of Women, from 1943 until her retirement in 1959. The Hottel Award was established in 1959 to honor “intellectual competence, commitment to ideals and principles, and loyalty to the University of Pennsylvania.”

In 1969 the Senior Class decided that more women should be recognized for their service to the University. At the same time, they wished to honor the contributions of Gaylord P. Harnwell, a distinguished nuclear physicist who had served as President of the University since 1953 and had announced his retirement for the following year. The second women’s award is therefore given in honor of President Harnwell.

Like the Harnwell Award, the Goddard Award was established in 1969 to recognize exemplary service to the University community. It is named in honor of a prominent professor of botany who served as Provost of the University from 1961 to 1970

First presented in 1977, this award is named in honor of a woman who served as Dean of the College for Women from 1958 to 1975 and who fought for women’s equality long before it was accepted. Rebecca Jean Brownlee earned three Penn degrees (B.S. in Educ., 1934; M.A., in Political Science, 1936; Ph.D. in Political Science, 1942), devoted more than 40 years of her career to Penn, and in 1986 received the University’s honorary Doctor of Laws in recognition of her extraordinary achievements. The Brownlee Award is symbolic of fourth honors among the senior women.

Women’s Hey Day was the same day and time as the men’s until 1954, when it was changed to the evening before the men’s. This change resulted in a new ceremony. Immediately before Hey Day, a dinner was held for all women undergraduates at which the classes changed colors, a tradition at the time. The first joint men’s and women’s Hey Day ceremony was held in 1968.

Return to top
« Straw Hat Day
Other Awards and Citations »