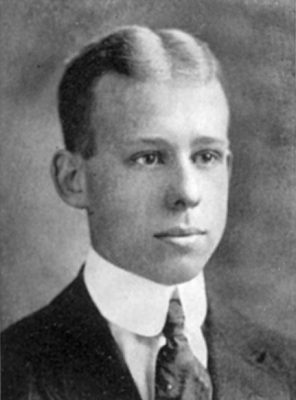 Eugene Henry Southall, 1916
Get more image details
According to the 1916 Pennsylvanian, the name “Hey Day” was chosen by a committee formed especially for the purpose of coming up with an appropriate title for the newly established Moving-Up Day. However, there has also been a claim that the name came about as a result of a crude pun made by Eugene H. Southall, Class of 1916 and Editor-in-Chief of The Pennsylvanian, in an article in The Pennsylvanian.

Southall had been well-acquainted with the word “heyday” thanks to Dr. Weygandt, one of his favorite professors, who frequently spoke of “the heyday of someone’s career” in his lectures. In an editorial in The Pennsylvanian, Southall half-facetiously suggested that Straw Hat Day be known henceforth as “Heyday” and that the then scattered events of importance be concentrated in the one day which would represent a sort of apogee or heyday of college life and activities. The mental progression for the change of name was from “Straw Hat Day” to “straw” to “hay” and then to “Heyday”, the end of the sequence not being inappropriate. To Southall’s great surprise, his pun was not ignored or condemned, but the general idea of “Heyday” somehow caught on. The result was as had been advocated; instead of being scattered on and around Straw Hat Day, most of the significant events of undergraduate life became concentrated in that one day.