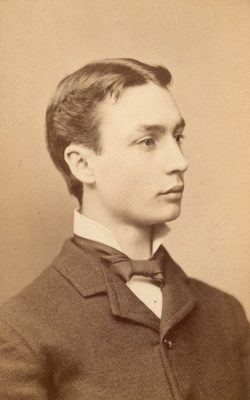 Henry Howard Houston, Jr., 1878
Get more image details
The history of student governance at the University of Pennsylvania dates to the opening, in 1896, of Houston Hall on Penn’s West Philadelphia campus. Houston Hall, said to be the first student union on an American campus, was intended as a place for students of the University to pass “their leisure hours in harmless recreation and amusement.” The Houston Club booklet published shortly after the opening of this student union proudly presents photographs of its facilities, including a billiard room, bowling alley, trophy room, swimming pool, gymnasium, music room as well as an auditorium, reception and reading rooms. The building was constructed as the gift of Penn trustee Henry Howard Houston and his wife Sallie in honor of their son, Henry Howard Houston, Jr., College Class of 1878, who died within a year of graduation on his grand tour of Europe. Student governance at Penn evolved into other forms in the early and mid-twentieth century, but its origins are in Houston Hall. 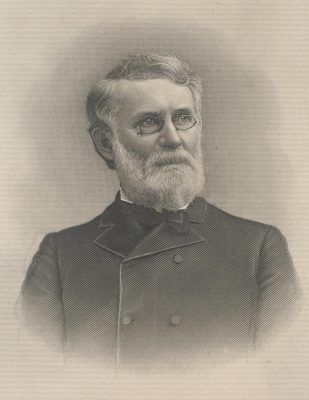 Henry Howard Houston, c. 1880
Get more image details
Houston Hall opened in January 1896 and a student organization known as the Houston Club was established virtually simultaneously. The 1896 edition of the undergraduate student yearbook, The Record, identified James M. Stiffler, Jr., Charles S. Langstroth, Clarence W. Willie, Harry C. Westervelt, and John B. Scott as the first officers of the Houston Club. These five men may be regarded as the founders of student government at Penn. They had charge of all activities held in Houston Hall and managed them through a system of committees. Although not all students chose to become members, the Houston Club was open to all male Penn students and practiced a thoroughly democratic governance structure from the beginning.

As Article II of its constitution stated, “the object of [the Houston C]lub [was] to draw together students, officers, and alumni of all Departments of the University in a wholesome social life, and to provide for them suitable amusements and recreations.” In order to achieve this goal, the Houston Club’s constitution clearly laid out the leadership structure and methods of operation.

The club had five officer positions: the President, the Vice-President, and the Recording Secretary were elected officers; the Secretary and the Treasurer were appointed by the Board of Trustees of the Houston Club one week after the Board announced the election results. Any member of the club was eligible for any of the officer positions, the only exception being that the president had to have been a member of the club for at least one year before he could run for that office.

Three standing committees also governed the club: the House Committee, the Membership Committee, and the Library Committee. The House Committee was in charge of maintaining Houston Hall and its non-literary contents, such as pool tables and chessboards. The Membership Committee oversaw the admission of new members to the club and the Library Committee was in charge of all the books, magazines, and other reading materials in the Club’s possession. In an attempt to increase the scope of the Houston Club’s democratic influence on campus, the club’s constitution mandated that each standing committee consist of two members from the College and two from each of the seven graduate and professional schools, as well one member of the faculty. 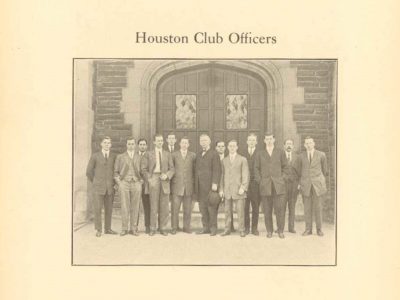 Members of the Houston Club exercised their democratic privileges by voting for representatives of their class as well as their school. Candidates for the elected officer positions had to be nominated by members of their class while candidates for the committee positions had to be nominated by students in their school. Each class was permitted to nominate no more than three candidates for each of the elected officer positions and each school was permitted to nominate no more than five candidates for the two spots representing that school on each committee.With the nominations completed, the Club could proceed with its elections. Students in each school were permitted to vote for their representatives for committees and the entire club membership voted for the elected officer positions, regardless of the class year and the school department of the candidates or the voter. On a set day in April, the polls in Houston Hall were open from nine in the morning to six at night and all members were highly encouraged to submit their color-coded ballots for committee and officer elections. 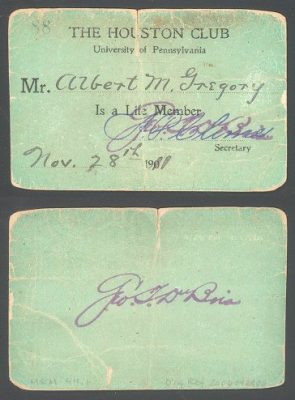 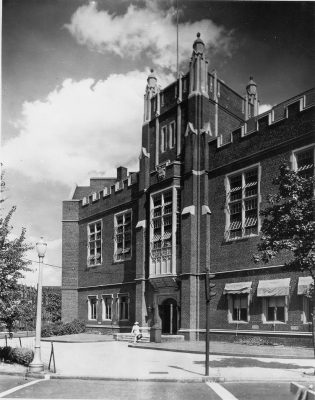 Over the years, the number of students who could not become members of the Houston Club and participate in student governance at Penn was reduced. At the beginning of the 1922-1923 academic year, the Houston Club membership fee was included in the tuition for all University students as a part of the “General Athletics and Houston Club Fee.” This change made it so that all tuition-paying male students were now a part of the club and able to vote in its elections. At the beginning of the 1925-1926 academic year, Bennett Hall (now Fisher-Bennett Hall) was opened. Bennett Hall was essentially a women’s version of Houston Hall, a space in which female students would socialize and relax. Bennett Hall, just like Houston Hall, was governed by a student organization; in this case it as the Bennett Union Board (BUB). 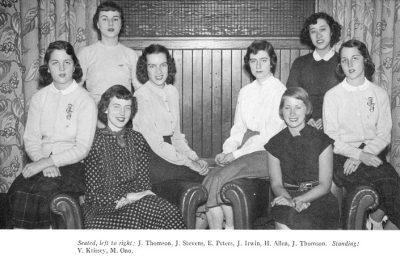 As access to Houston Hall became wider-spread throughout Penn’s student body, the Houston Club became unnecessary and on June 6, 1929, it was replaced by the Houston Hall Board, an organization open to all male tuition-paying Penn students. The Houston Hall Board (HHB) was open to a far wider range of students than the Houston Club and dealt only with Houston Hall and events held therein.In December of 1969, HHB and BUB, merged to form the Penn Union Council, an organization which performs essentially the same duties as today’s Social Planning and Events Committee. The establishment of the HHB and the BUB coincided with the establishment of the Undergraduate Council as Penn’s first organization with the sole focus of student governance.

Even though the Houston Club was clearly not an entirely democratic organization, it laid the groundwork for a future of democratically-run student government organizations at Penn. The Houston Club also demonstrated that undergraduate students were more than capable of choosing their own leaders who were themselves quite capable of handling undergraduate affairs while making mature decisions. If not for the Houston Club and its well-managed and smoothly-run executive board, it is unlikely that Penn’s administration would have allowed future student government organizations to become as powerful as they were to become.