The University Archives receives many questions about the origin, history and uses of the University’s seal and arms. In October 1965 the Office of the Secretary published a little booklet on these subjects, which it intended to “be helpful to members of the University community – faculty, students, and alumni – and to commercial organizations planning applications of the arms.” It appears that this booklet was an official University publication at the time of its release and continues to represent standing University policy and guidelines. We have therefore transcribed it in full, as below:

The Seal of the Corporation 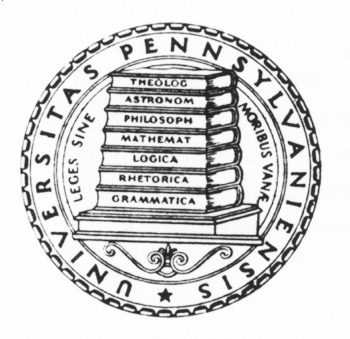 Seal of the University of Pennsylvania, 1933-Present
“The Trustees of the University of Pennsylvania,” like other corporations, has an official seal with which signatures to documents issued or authorized by the Trustees are authenticated. The seal is, in effect, the “signature” of the corporate entity and therefore should be put to no other use. It had its origin at a meeting of the Board of Trustees in [1755] with Benjamin Franklin as Chairman, where it was suggested by Provost William Smith and agreed that a seal should be prepared for the use of the Corporation. Though the seal underwent changes over the years, the most recent design, approved in 1932 and adopted in 1933, returned it to virtually its original form.

The seal is composed of seven books stacked on a slanted desk top with the books bearing the following titles in the order listed from top to bottom: Theolog, Astronom, Philosoph, Mathemat, Logica, Rhetorica, Grammatica. On the periphery of the stack of books appears the University motto Leges sine Moribus vanae– in effect, “Laws (or learning) without character are in vain.” The entire arrangement is encircled with the inscription Universitas Pennsylvaniensis.

University Archives Note: The above, which mentions a meeting of the Trustees in 1755, contains minor historical errors. A corporate seal was first proposed not in 1755, but at a meeting of the Trustees held on 17 November 1753. It is not known if a seal was designed and engraved at that time. The meeting of the Trustees at which the subject of a corporate seal was raised a second time was held on 13 April 1756. Franklin was then President of the Board, but he was not recorded as present at the meeting. The Trustees authorized the following action: “that Mr. Smith prepare a public seal for the College with a proper Device and Motto and get the same speedily engraved on Silver.” This latter seal was used to emboss the diplomas of the first College class, which graduated in 1757.

The Arms of the University 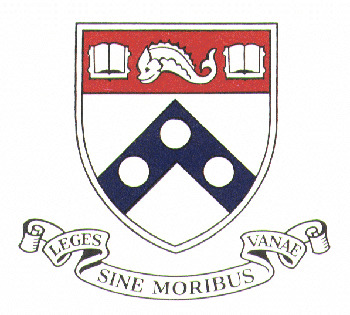 This design includes the three plates of the Penn family arms and the dolphin of the Franklin shield. The open books denote an institution of learning. The colors of red (gules) and blue (azure) are believed to have been chosen originally by a student representing the University in a track meet held at Saratoga, New York, in 1874. These colors were adopted by the Athletic Association in 1876 for use by University teams and by the Trustees in 1895 for use on the academic hood worn by graduates of the University. When the Trustees in 1910 adopted a design for the University flag they specified that: “The colors shall conform to the present standards used by the United States Government in its flags.” The Red and Blue of Pennsylvania are therefore officially the hues maintained in the national ensign.

The University motto is the Latin phrase Leges sine Moribus vanae, which translates into English as “Laws without morals are useless.” The selection of this motto is attributed to the first Provost, William Smith. It has undergone some changes in wording and interpretation over the centuries, taking its modern form in 1932.

Provost William Smith selected a quotation from Horace, quid leges sine moribus vanae proficiunt, as the motto for his College of Mirania, the ideal institution which lent inspiration to the planning of the College, Academy and Charitable School of Philadelphia – the three departments which, along with the Medical Department, later (1791) came to be known as the University of Pennsylvania.

The original seal adopted in 1755 bore the abbreviated inscription Sine Moribus Vanae, and succeeding seals bore either this version or no motto at all. In less official usage the motto was evidently rendered as Leges sine Moribus vanae, as in a bookplate of the library employed before 1829. Near the end of the nineteenth century, a wag translated the motto on the seal as “loose women without morals,” which so distressed the Trustees that when the seal was rather radically redesigned in 1899 the word Literae was inserted so that the motto read Literae sine Moribus vanae.

The Committee on University Seal and a Coat of Arms in 1932 recommended and the Trustees adopted the following resolution, officially restoring Leges sine Moribus vanae as the University motto:

“WHEREAS, the design of the University seal now in use, since 1900, seems confused and in other ways not entirely satisfactory,

THEREFORE, BE IT RESOLVED, That the Committee on University Seal, appointed by the Board of Trustees on Jun 9, 1930, be requested to design a new Seal, to contain the wording and general arrangement of the original Seal of 1755; namely, around the outer border, the words Universitas Pennsylvaniensis, in a minor position the original quotation Leges sine Moribus vanae, in the center, on a desk or table, a pile of seven books marked as follows:

It was in this session that the Trustees also approved the design for the arms.

In 1956 an informally constituted faculty committee which studied the wording of the motto commented as follows:

“On the matter of the University motto we are in complete and solid agreement that it must not be changed from the original form which was apparently LEGES SINE MORIBUS VANAE. Whatever the choice of words on the first seal of the University may have been, it is clear that they were chosen from the sentence, quid leges sine moribus vanae proficiunt, which Provost Smith had taken from Horace, Odes 3, 24, 35-36. It is natural to suppose that this sentence was reduced to the words sine moribus vanae by a designer or engraver in order to adapt the rather long sentence to a brevity appropriate to heraldic style, where three words are often the limit, as may be seen in mottoes such as lux et veritas, e pluribus unum and the like. This abbreviation was, however, too radical since it omitted the substantive (leges) to which the prepositional phrase (sine moribus) and the adjective (vanae) applied. The simple and logical remedy was to restore the word leges, as was done.

The word literae cannot be substituted for leges without doing obvious violence to the famous quotation. The substitution does not seem to us necessary or, indeed, even desirable. The sense of the passage in Horace is, ‘Of what avail are empty laws without (good) mores?’ This was said by Horace in the light of Augustus’ attempt to lead the Roman people back to the ways of life that had made and kept them great, and probably reflects the thought Ennius expressed in the line, moribus antiquis res stat Romana virisque (the Roman state is founded on its ancient mores and its men).

This ancient concept, far from laying stress on law, rather deprecates law when it is not founded upon and supported by sound morals in the body politic to which it applies. This stress seems to us a significant one in any age and a particularly appropriate one for an institution of higher learning in our own time.”

Use of the Arms

The arms find considerable use as a decoration on jewelry, stationery, furniture, glassware, flags and pennants, and wall plaques. But however and wherever used, they should be treated with dignity, and this can be the only test as to whether the use of the arms is appropriate in a given case. 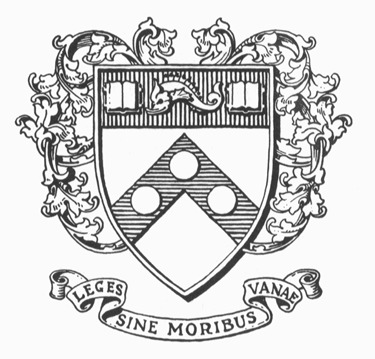 University of Pennsylvania, Coat of Arms

The shape of the shield may be varied somewhat for different applications, but the interior elements must not be altered in design or proportion. The arms may not be combined on the same shield with other arms. Embellishments such as stylized leaves may surround the shield, dignity and good taste being the best tests of appropriateness.

The arms may be used alone, but are customarily associated with the motto Leges sine Moribus vanae. The motto is ordinarily set forth in a scroll below the shield but in some applications is set in a circular pattern around the shield. In the latter usage there is commonly also an outer ring bearing the words Universitas Pennsylvaniensis 1740. The first word is sometimes rendered in the genitive, Universitatis, to give the meaning … (arms) of the University of Pennsylvania. 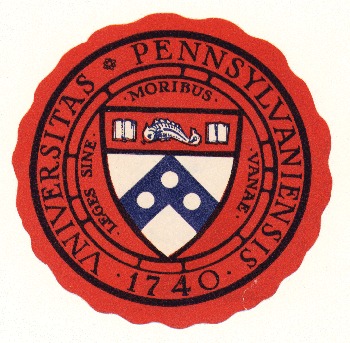 It should be noted that when the arms are reproduced in black and white, parallel vertical lines should appear in the chief (upper portion) to represent gules (red), and parallel horizontal lines should appear in the chevron to describe azure (blue). The dolphin, open books, field (lower portion less the chevron) and plates (round spaces within the chevron) are rendered argent (white or silver). In color reproduction, the chief should be red and the chevron blue, with no parallel lines since they merely denote the colors when color is not used.