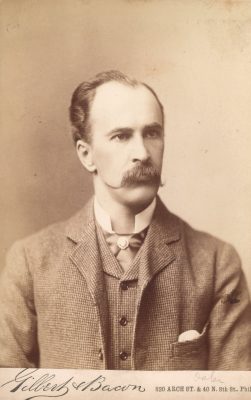 William Osler, c. 1880
Get more image details
After its failed experiment in 1847, the Medical School abandoned its ambition to reform medical education. Instead of trailblazing, Penn chose to rely “on close to a hundred years of leadership and on the reputation of its nationally famous professors.” Throughout the 1850s and 1860s other American medical schools reformed, while Penn remained inactive. The University of Michigan rejected the proprietary model and gave their faculty fixed salaries; Northwestern created a graded curriculum which included lectures on microscopy and chemistry. In 1871, Harvard’s president Charles W. Eliot persuaded the medical faculty to accept a series of reforms. Harvard endowed their faculty, lengthened its courses to 9 months, and created a fully graded curriculum. Much to the dismay of Penn’s faculty, Harvard became the leading institution of medical education in America. William Osler, a Penn professor from 1884 to 1889, described Penn’s identity in his memoir,

“There was probably no school in the Union in which the outlook for reform was thought to be less hopeful than at the University. The faculty was a strong one, but it contained a number of men who were saturated with old-time prejudices, and who were bitterly opposed to any change in the method of medical education”