Advances in medical science during the early nineteenth century increased the scope and complexity of medical education. European scientists successfully placed a new emphasis on pathology, microscopy, and hygiene within the medical profession. These advances pushed American medical schools to consider lengthening the course of instruction. As the country’s leading medical faculty, professors of the University of Pennsylvania’s Medical School saw it as their duty to advance educational standards. In the fall of 1847, the Medical School extended its course length to six months; with introductory lectures beginning on October 4th and courses concluding on April 1st. Penn believed its leading position would influence other schools to extend their courses as well. To the surprise and dismay of Penn’s faculty, almost all of America’s other 30-odd medical schools did not follow suit. Instead, they kept their four-and-a-half or four month course length. After a six year trial, Penn’s medical faculty reversed its action and, in 1853, returned to a nineteen week course curriculum. 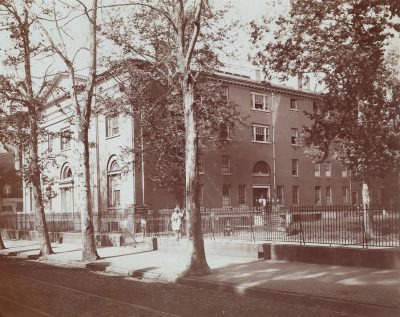 The reform of 1847 failed because it did not fit into the economic structure and ideology of American medical schools. Until the middle and late nineteenth century, most of the country’s medical schools were proprietary institutions. Medical students paid their tuition by buying tickets, which were sold at a substantial sum, to individual lectures. Each faculty member’s income depended on the number of students attending his lecture. Lengthening the course period meant students would have to pay more money for housing and lectures. The faculty of most medical schools worried that the 1847 reform would drive their students to other institutions, thereby threatening their income. Despite these concerns, Penn’s enrollment did not decrease dramatically; George B. Wood, the Chair of Theory and Practice of Medicine, told his class in 1850, “We have never been so prosperous as on the average of the last few years.” Wood, a proponent of the reform, glossed over the gradual decline of student enrollment. From 1847 to 1852, the enrollment of Penn’s medical school dropped from 508 to 410 students. A similar decrease at other medical institutions with fewer professors and students would cause significant concern. Although Penn still had a large enrollment and a wealthy faculty, the decrease had an impact on the well-being of the school. Joseph Carson, the Dean of Faculty in 1852, explained in retrospect, “Our school would be unable to sustain itself in the degree of expansion which it first attempted, and that the six months’ course must be abandoned.” After experiencing a loss of their students and income, Penn’s medical faculty avoided any further reform for the next three decades.

Despite its financial and institutional failure, the reform of 1847 enabled the Medical School to create a unique and modern curriculum. Because American medical education was based around clinical care, schools avoided integrating “modern science” and research into the curriculum. Medical faculties, comprised of practicing physicians, taught courses in surgery, pharmacology, anatomy, medical diagnostics, and obstetrics. After receiving their medical degree, graduates sought to establish their own private practice or work in a hospital. In the 1820s and 1830s, European physicians introduced research science into the world of medicine. Improvements to the microscope allowed European physicians to study the origin and transmission of disease on a much more defined level. Penn professors William Horner, George B. Wood, and Samuel Jackson supported European medical research before many of their counterparts. Therefore, they wanted to integrate new discoveries and fields into their lectures. The lengthened course period allowed Horner, Wood, and Jackson to teach European research, pathology, and microscopy. George B. Wood told his 1850 class, “The science of medicine has been greatly enlarged within the last fifty years; and to teach it thoroughly as it was taught before that period requires a longer time.” In contrast to other medical schools, Penn’s faculty consisted of research scientists and physicians. William W. Gerhard and Joseph Leidy pioneered American pathological and microbiological research in the 1830s and 1840s. Alfred Stillé, a Penn graduate and professor, was one of Philadelphia’s ablest physicians and America’s leading pathologists. The reform of 1847 allowed Penn’s Medical School to create a dynamic curriculum that included new fields as well as foundational clinical courses.