The Glee Club was founded on Tuesday, November 5, 1862, by eight University of Pennsylvania students as an “association for the furthering of [their] musical talents.” These men were members of the College Classes of 1864 and 1865, and their collegiate experience was greatly impacted by the American Civil War. According to the 1865 University Record, though the Class of 1865 altogether included sixty members, so many left as a result of the war that only twenty four remained at graduation.

Despite the upheaval of war, the Glee Club’s founding members’ years at Penn were an exciting time of development for student life at the University, particularly in regards to extracurricular activities, and much of it was spurred on by the students themselves. In addition to forming the Glee Club, they began such customs as Class Day, Senior Honor Awards, and the Bowl Fight, and also participated in Penn’s first intercollegiate athletic events. The Class of 1865 also produced Penn’s first printed yearbooks, the 1863 University Society Record and the 1865 University Record. Prior to these developments, student organizations at Penn had consisted only of two literary societies and four fraternities.

The founding members of the Glee Club, five of whom graduated with their class, all went on to success in their chosen professions: a doctor, a legal expert, a judge, two railroad executives, and several clergymen. 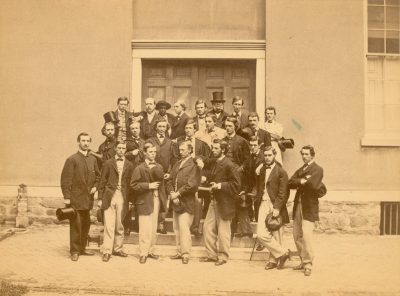 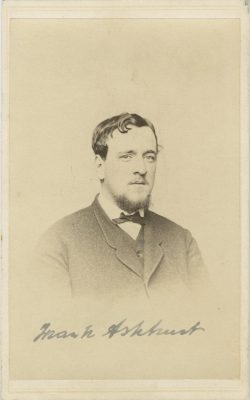 Francis Ashhurst, 1867
Get more image details
Francis Ashhurst (M’1867) was born in Philadelphia on January 5, 1844, the son of Lewis Richard Ashhurst of the Class of 1824 and Mary Hazelhurst. He entered the University of Pennsylvania as a member of the Sophomore class in 1861 and left at the end of his Junior year without having received a degree. Ashhurst would, however, go on to receive his medical degree from Penn in 1867.

Ashhurst practiced medicine from 1874 until his death and founded Memorial Hospital of Burlington County in Mt. Holly, New Jersey, in 1880. He died in Mt. Holly on August 17, 1885.

In 1867 and 1868 Bates studied at Harvard Law School, where he was awarded the prize for the best essay. As a lawyer he became the Assistant Attorney General of the state of Delaware from 1869 to 1874 and Speaker of the House of Representatives in Delaware in 1883. Subsequently he was employed by the federal government as the United States Commissioner to Samoa and Tonga in 1886, and as Special Envoy Extraordinary and Plenipotentiary for the U. S. at the 1889 international conference at Berlin concerning affairs in the Samoan Islands. A staunch Democrat, he represented Delaware on the Democratic National Committee and was a delegate to the Democratic conventions in 1880, 1884, and 1888. Bates was also one of the organizers and one-time president of the American Bar Association and chairman of the international law committee of that organization. After his retirement in 1896, he became the author of several legal textbooks.

George Handy Bates was married to Elizabeth Ballister Russell. He died on October 30, 1916, in Philadelphia.

Brown became an Episcopal clergyman, officiating in Pennsylvania as well as in Albany and New York City in the state of New York, Washington, D.C., Maryland and Delaware. He was also a missionary in northern California and, from 1873 to 1884, a chaplain in the U. S. Navy. James H. H. Brown died in December of 1898.

Mitchell entered the University in 1861 as member of the Class of 1865. He was a member of the Phi Kappa Sigma fraternity and vice president of the Glee Club.

During the Civil War, Mitchell was a first Lieutenant in the University Light Artillery and also commissioned as a first Lieutenant in the 198th Pennsylvania Regiment of the United States Volunteers. He was captain of the University Light Artillery in his senior year at the time he left the University for military service. In May of 1865, Mitchell served on the staff of General Joshua L. Chamberlain. Before being mustered out on June 4, 1865, he was acting Assistant Adjutant General for the Brigade at the surrender of Robert E. Lee. He became a lawyer and then, in 1879 and 1880, a judge of the First Judicial District of Colorado.

Newton entered the University in 1861 as member of the Class of 1865. He was a moderator of the Philomathean Society and president of the Glee Club. He received the Sophomore Declamation Prize and also became the class poet; his poems composed for numerous occasions over the years included the class poem “Carpe Viam.”

During the Civil War emergency of 1863, Newton served as a private in Landis’ (Pennsylvania) battery.

After graduation Newton attended the Episcopal Divinity School in Philadelphia before serving as an Episcopal clergyman in various places including Newark, New Jersey, Boston, and Pittsfield, Massachusetts. Newton authored numerous religious texts and several cantatas. He was awarded an honorary D. D. degree by the University of Pennsylvania in 1890.

When the Confederate army threatened Pennsylvania during the summer of 1863, Rogers became a private in the First Troop of the Philadelphia City Calvary. Rogers went on to graduate from West Point in 1867. He then served as a second lieutenant in the Army Corps of Engineers until his resignation from the Army in 1869.

After his military years, Rogers entered the lumber business in Detroit, Michigan. Here he helped to organize Presque Isle County, the county seat of which is named Rogers City in his honor. In 1875 he moved to Garrison, New York, (outside New York City) to work as a cotton exporter; in 1883 he was appointed railroad commissioner of that state. Later, William Rogers was employed by the Delaware, Lackawanna, & Western Railroad Company. 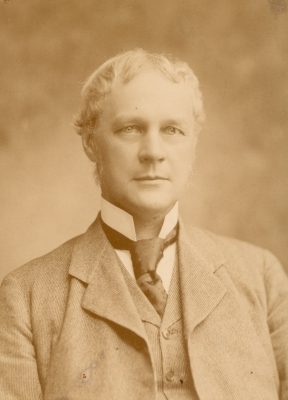 When young Sims entered Penn’s Class of 1865 as a sophomore in 1862, he immediately took on a leading role in the organization of student life. During his sophomore year he was secretary of the Class of 1865, secretary and treasurer of the University Glee Club, as well as a member of the University Chess Club, the Philomathean Society and Phi Kappa Sigma fraternity. As a member of the Executive Committee of his senior class, Sims was instrumental in the establishment of Penn’s first Class Day.

Sims played on his sophomore class Cricket Eleven and on the 1864 University cricket team that played in Penn’s first athletic event, a match with Haverford College. Sims’ leadership included serving as secretary of the Glee Club and secretary of his sophomore class. He was the driving force in organizing the first day of school tradition known as “Class Day.” According to the 1865 Record, this event was “the most splendid celebration which the University has ever known.”

After his admission to the bar in 1868, Sims entered the service of the Pennsylvania Railroad Company as the assistant secretary. He later rose to become secretary of this company as well of several other railroad companies. Outside of his professional life, Sims served as a Trustee of the University of Pennsylvania and as a manager of the University Hospital, the University Veterinary Hospital and the Girard Trust Company. He was also the accounting warden for St. Paul’s Episcopal Church in Chestnut Hill and a lay deputy to the Diocesan Convention.

As an Episcopal priest, Thomas served St. Matthias Church, Trinity (Marylandville) and St. Phillip’s Church, all in Philadelphia. He was also for many years the editor of the American Sunday School Magazine. Thomas died in Philadelphia on June 2, 1905. He and his wife, Clara L. Horstmann, had a son, Walter H. Thomas, who graduated in the class of 1899.