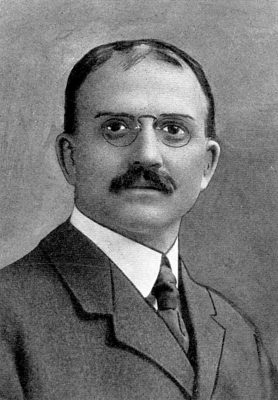 This was George Woodruff‘s last season as coach.

On the 22nd of October, three days after the victory against Bucknell, the University of Pennsylvania played the Navy and lost, 5 to 6, owing in part to injuries accrued by Pennsylvania during the season’s opening games. The loss shocked many. According to contemporary newspaper articles, Woodruff was said, perhaps apocryphally, to have remarked after the game that “I’m afraid this is only the beginning of our troubles.”
So many players had been injured that Penn’s team for the next game was composed almost entirely of substitutes. Nevertheless, the game (against Gettysburg), was won handily, 22 to 0.

On October 24th, a day after the Gettysburg game and two days after the Navy game, Penn’s mostly-recovered team left for Chicago. The team’s send off was described in The Ledger:

“Fifteen hundred University of Pennsylvania students marched to Broad Street Station…and gave the team a rousing sendoff as they left for Chicago…headed by the University Band, the line filed into the train shed and surrounded the gate through which the players were to pass. They formed a narrow lane, and as each man of the team passed through the gate he was given a mighty cheer…just as the last cheer died away…the gate shut and the train prepared to pull out for its long journey, a well known figure rushed up the steps of the station and came tearing across the pavement. The students recognized the outlines of Head Coach Woodruff. They yelled to the gateman, and opened up a way for him as he raced to the gate. The man opened it in time to prevent it being burst open by the coach, and he boarded the train in time.”

The cheering throngs were not disappointed. Penn beat Chicago soundly, 11 to 0. But shortly thereafter, on November 2nd, Pennsylvania’s fortunes were reversed in a game against Columbia which ended 0 to 10: Columbia’s first victory over Pennsylvania since Pennsylvania instituted a coaching system, and only the second victory since Pennsylvania began playing intercollegiate football. 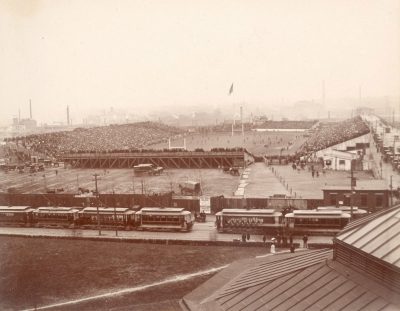 Anyone disheartened by the loss to Columbia was likely further distressed by Penn’s performance on the practice field: in two days of practice over November 5th and 6th the varsity team lost every practice game it played, and injured more players in the process.

The losses to Columbia and to Navy, the high injury rate, and the overall poor quality of playing throughout the season made many people worry about the football program. In response to growing dissatisfaction with the team’s performance, Woodruff offered an explanation for it’s problems. The Telegraph quoted his statement: “Our boys are lacking in weight; it is unfortunate, but cannot be helped. We have done all we could to develop a winning team. Harvard has an exceptionally strong and heavy team, and I am afraid that our chances of success are fewer than they have been any day preceding this contest for several years. We can rely on the team doing everything possible and no one can expect more. Pennsylvania’s bad luck with accidents is partly responsible for the weakness.”

Woodruff’s prediction was correct: Penn’s chance of success was low. They played against Harvard the next day and lost 6 to 33. According to The Inquirer of November 10, “‘The Quakers’ defense was weak,’ said one member of Harvard’s team…’So it is hard to say what our offense can do, and their offense was so uncivilized that it is hard to say just how strong our defense is.'”