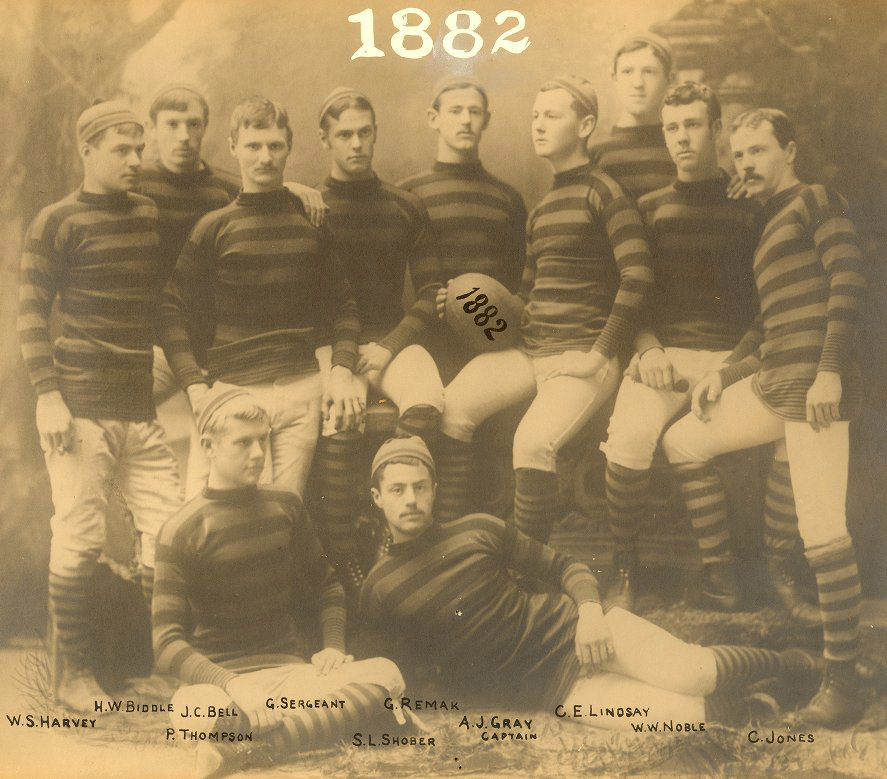 When intercollegiate American football began on November 6, 1869, with a game played by Rutgers and Princeton in New Brunswick, New Jersey, football bore little resemblance to its modern-day descendent. Rules for the contest were adopted from those of the London Football Association, which themselves were similar to soccer — players could neither throw the ball nor run with it, though they could bat it about with open hand or fist. It was not until 1876 that formal rules were codified for football as a distinct sport with its own rules.

Earlier forms of football existed perhaps as early as the 1820’s, though strictly as informal affairs between unorganized participants, played by whatever rules the players that day decided to use. In essence, these were games in which players were divided between two teams with the goal of advancing a ball past the opposing teams. These were the only rules in common with later football antecedents; in some cases, these were the only rules at all. Calling these games ‘rough’ would be an understatement; the preferred adjective at the time was ‘brutal.’ Within the college context, these ball games were usually a right of passage for newly enrolled freshmen. The teams were the classes, and the ball was only an excuse for a brawl. It was for this reason that, around 1860 or so, ‘football’ as it was then termed was banned outright at a number of colleges.

Many students wanted the game brought back, and colleges sought to compromise by reintroducing football in a less violent form: in 1867, Princeton proposed formal rules modified from those of the London Football Association. These rules resulted in a game which more closely resembled modern soccer than modern football. Over the next two years these rules came into widespread usage. Although most schools made changes to suit their own needs, by 1869 football teams from different colleges were able to play each other with only small changes needed to bring each school’s rules in line with the others.

Even though we today trace the roots of football to 1869, those witnessing the Princeton-Rutgers game may not have thought they had seen the birth of anything of immediate importance. Princeton’s rules did not become popular right away, with two games played in 1870, none in 1871, and a scarce handful in 1872. Since differences in rules between schools may have still hampered competition, representatives from Yale, Columbia, Princeton, and Rutgers met in October of 1873 to establish a unified set of intercollegiate rules under which any college could play. The colleges decided on twelve rules. Among other things, they required that a round ball be used for all games, that the ball could not be carried or thrown, and that the game should not end until either six goals were scored or until the game was called; that is, that the game had no set length. All in all, the conference settled on a set of rules which resembled soccer, much as Princeton’s 1869 rules had.

Harvard was invited to the conference but did not attend because of a difference of opinion over what form football should take. It had drawn up its own set of rules in 1872, which loosely resembled rugby, with the twist that any player could catch or pick up the ball, but could only run with it if chased by an opponent. No other college adopted the Harvard rules; most favored those of the 1873 conference. 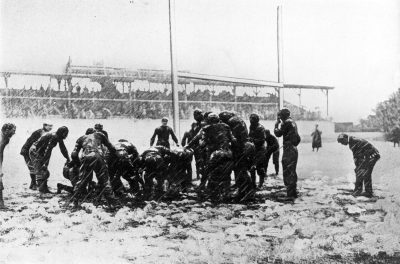 Because it did not agree to the rules adopted by the rules set up by the other colleges in 1873, Harvard was forced to leave the country to compete, engaging in a series of games with McGill college’s rugby team that alternated between being played under Harvard’s rules and the traditional rules of rugby, which Harvard’s players had never tried. Once they did, however, the players decided they preferred traditional rugby to their own rules, and began trying to convince other colleges to try them as well. It was not until 1875 that Harvard succeeded in this, convincing Yale to play a game of rugby, with Princeton students in attendance. The game convinced the other schools of rugby’s superiority, or at least novelty, and by 1876 both Yale and Princeton had abandoned their own rules in favor of modified rugby rules.

On November 23, 1876, Representatives from Harvard, Columbia, Princeton, and Yale, met at Massasoit House in Massachusetts to decide on new universal rules, an event later termed the “Massasoit Convention.” There, they adopted the Rugby Union rules in full, with slightly modified rules for scoring. These rules spread like wildfire among the colleges and athletic clubs of the country — among them, in that same year, the University of Pennsylvania.