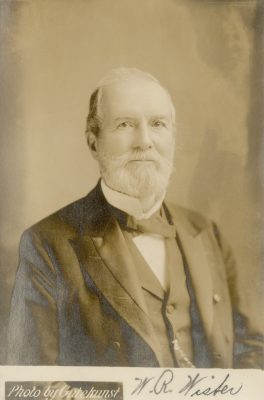 William Rotch Wister, c. 1880
Get more image details
Cricket began at the University of Pennsylvania with the founding of the Junior Cricket Club by William Rotch Wister, A.B. 1846, in the fall of 1842. This club was very active until after Wister’s 1846 graduation, when lack of leadership and of funding led to the disappearance of cricket from University life until its revival in the 1860s.

In 1842 young Wister was encouraged by Dr. John K. Mitchell, who was closely involved in the recently founded Union Club, an organization devoted to the playing of cricket. The purpose of Penn’s Junior Club was also to play cricket, and to that end, the club rented the Union Club’s field in Camden (pictured above) for one day a week. Since Penn’s Ninth Street Campus was small, and the Union Club field was large enough to allow the students to practice and host matches. Thus it was, that the very British game of cricket became Penn’s first team sport even though the basics of playing the game still remain a mystery to most Americans.

Generally, practices were held each afternoon, and matches were held on Saturdays. Although coaches were uncommon for college sports teams throughout most of the nineteenth century, the Junior Club hired a coach to teach cricket strategies and techniques to the students, most of whom were new to the game. The coach was Englishman William Bradshaw, an experienced cricket player who had grown up watching and playing the game of cricket. The young men were so enthusiastic that, even before warmer weather arrived, they practice their cricket skills at Barrett’s Gymnasium near Sixth and Chestnut Streets.

During its short life, the Junior Club had over fifty members. Sometimes members of the Junior Club split into two teams and played each other; thus it was on September 27, 1845, that Wister’s Eleven defeated Blight’s Eleven in a two inning game. S. Weir Mitchell, A.B. 1848 (son of Dr. John K. Mitchell and later himself a world-renowned physician and scientist) scored 38 runs, winning a bat offered as a prize by his father to the player who scored the most runs. In another 1845 match, William Rotch Wister won another prize bat. The Junior Club also played a number of cricket matches with the Germantown Boys Club, as this team was a good match for the University cricket players.

The Junior Cricket Club was very active during the mid-1840s; its members numbered over fifty students. After Wister’s 1846 graduation, however, disagreement among the leadership and a lack of funding led to the end of any organized cricket club or team among Penn students. Several graduates of the University who had played cricket with the Junior Club became cofounders of the Philadelphia Cricket Club in 1854, but the game would not have a serious revival among Penn students until the 1860s.

Cricket began at the University of Pennsylvania with the founding of the Junior Cricket Club by William Rotch Wister, Class of 1846, in the fall of 1842. This club was very active until after Wister’s 1846 graduation, when lack of leadership and of funding led to the disappearance of cricket from University life until its revival in the 1860s.

During its short life, the Junior Cricket Club had over fifty members, including Benjamin Franklin’s great-great grandson, Thomas Hewson Bache and a number of other prominent men: