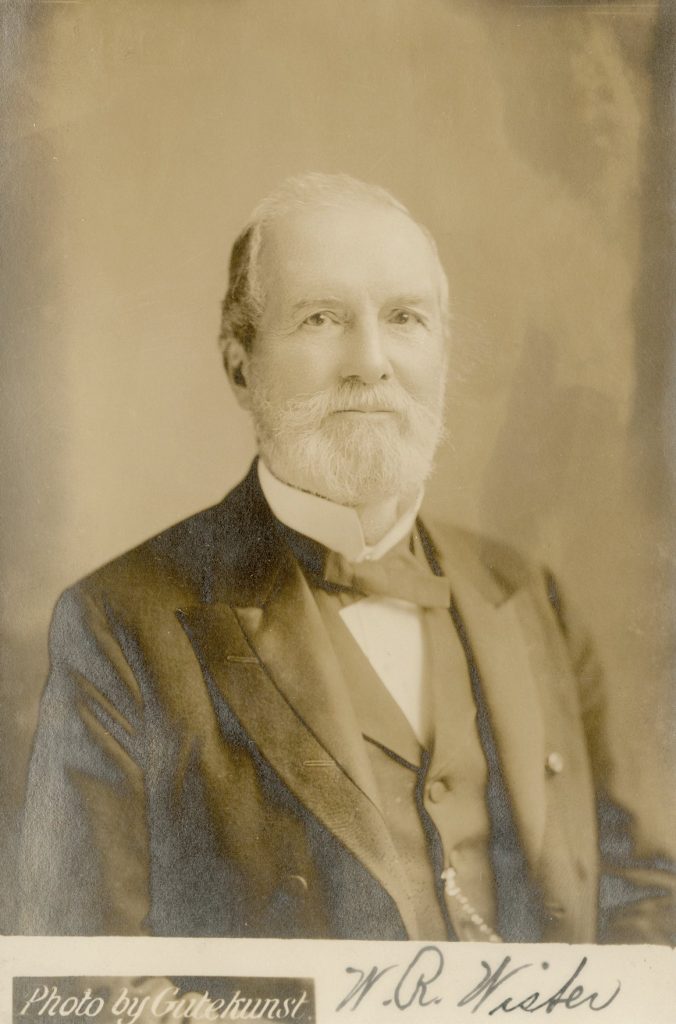 William Rotch Wister was born in Germantown, Philadelphia, in 1827 to William Wister and Sarah Logan Fisher. He entered the sophomore class of University of Pennsylvania in 1843. He graduated with a Bachelor of the Arts in 1846 and received his master’s in 1849, the same year he was admitted to the bar in Pennsylvania.

In addition to practicing law for over sixty years, Wister was active in business and finance. He founded the National Bank of Germantown and directed the Philadelphia Contributionship, the nation’s oldest fire insurance company. Wister was also a promoter of the Duncannon Iron Company and director both of the Guarantee Trust Company and of William Wharton Jr. & Co., Inc., a railroad supply manufacturer. During the “emergency” between July of 1863 and June of 1864, William Wister served in the Civil War for the Union Army as lieutenant colonel of the 20th Pennsylvania Volunteers. Wister was also active politically, serving on many Philadelphia City Councils.

As a student in 1842 at the University of Pennsylvania, William Wister founded the “Junior Cricket Club” which is said to have been the first Cricket Club in the United States to be made up of Americans. This Club’s match with Haverford College on May 7, 1843, was Penn’s first intercollegiate athletic event. After Wister graduated in 1846 the club disbanded, not being reformed until 1864.

Wister himself continued his involvement with the game, going on to found the Philadelphia and Germantown Cricket Clubs and earning him the honorary title of “Father of American Cricket.” A life-long Philadelphian, William Rotch Wister died on August 21, 1911, at the age of 83.