Cricket, organized as Penn’s first sport in 1842, began splendidly but then faded away after the graduation of William Rotch Wister in 1846. Young men attending Penn continued to play cricket, but as members of various clubs around Philadelphia rather than as part of a Penn organization. For the next decade or more, students would only occasionally get up a match between undergraduate classes. Cricket, however, would experience a revival at the University in the 1860s, and then, with only a few short breaks, would continue as an organized sport until 1924. During much of the nineteenth century, cricket was just as popular, if not more popular than the emerging campus sports of baseball, crew, football and track and field. 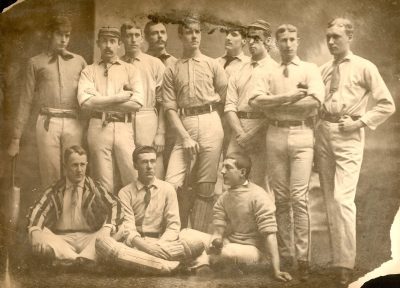 In the early 1860s, matches between teams of Penn students and teams of non-Penn students gradually resumed. By 1864, not only were class teams competing with each other, but the Penn cricket team played its first intercollegiate cricket match. In this match was against Haverford College, played at Haverford College, Penn was defeated by a score of eighty-nine runs to sixty runs.

The following year, 1865, the schedule of Penn’s cricket team did not include any intercollegiate matches. Penn resumed playing intercollegiate matches with Haverford College in 1866; their rivalry continued until 1869, when the Haverford faculty banned cricket away from their college grounds. During the early 1870s the Penn cricket team led a precarious existence. Class matches were sometimes held, and occasionally a Penn eleven played a team from a local cricket club. The yearbooks list Penn cricket teams from 1865 through 1872, but no teams for 1873, 1874 and 1875, the years right after Penn’s move from Ninth Street to its new West Philadelphia campus.

Cricket revived again in 1875. In this year Penn students not only participated in matches between classes, but also formed a varsity eleven which played a few minor matches. Record keeping during the late 1870s was spotty, but there is evidence that a varsity eleven played every season; opponents included Haverford College, Columbia University, Penn alumni, and the St. George eleven of New York City. By 1877, after the creation of Penn’s Athletic Association, students had organized a Cricket Club as well as class teams and a varsity team. There is evidence that Penn’s professional schools sometimes formed their own teams as well; for example, in 1893 the Law School defeated the College by a score of 202 to 74.

Over time opportunities for intercollegiate cricket began to increase. In 1881 Penn joined with Harvard, Haverford, Princeton and Columbia to form the Intercollegiate Cricket Association. Later Cornell would also be admitted. 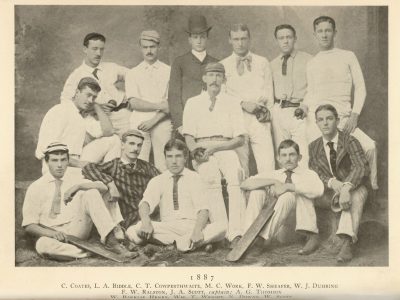 In 1895 Penn began competing on the international level. In July an international cricket match was played on the Manheim grounds in Germantown with one team made up of players from colleges in the United States and the other team consisting of young men from Canadian colleges; six Penn students were on the American team. Then, in September, past and current members of Penn’s varsity cricket team played past and current members of the English cricket teams of Oxford and Cambridge; Penn defeated the Oxford-Cambridge team by a margin of one hundred runs.

Cricket continued to thrive at the University of Pennsylvania after the turn of the century. In the summer of 1906, the Penn cricket team toured Canada to play matches with clubs there. The following summer, of 1907, the team made its most important tour, traveling to England and Ireland to compete with schools and colleges there. The serious decline of cricket at Penn did not began until the World War I era. After a brief revival in the early 1920s, Penn fielded its last cricket team in 1924.

The impact of University of Pennsylvania’s cricket teams was felt beyond the collegiate world. Many members of Penn’s cricket teams went on to play for and even to found clubs and teams in hiladelphia. Often these men participated in international cricket matches as early as 1859 and into the twentieth century.

Return to top
Origins as the Junior Cricket Club »
X