Analysis of the students of the Medical Class of 1889 reveals a variety of educational backgrounds, ages and geographic origin. One of the1889 graduates, William Cromwell Green, was an African American. The composition of the class changed from year to year as students required varying lengths of time to complete the three-year course of study, left without a degree, or sometimes entered at a more advanced level than the first year. A total of 197 students attended classes at one time during the three year progression of course work leading to the 1889 graduation, but only 128 students earned their degrees in 1889. Life experiences after medical school were varied. As general practitioners, specialists, and educators they practiced medicine everywhere from Philadelphia to California to Cuba to Switzerland.

A list of students in the Medical Class of 1889, including both graduates and non-graduates, is also available.

Previous Education Beyond the Secondary Level

Members of the Class of 1889 entered Penn’s Medical School with varied educational experiences. Many had attended and even graduated from college, but a considerable number of other students entered medical school without any college credits. A college degree was still not necessary for admission to the Medical School. It was enough to have passed the matriculation examination at a recognized college, or to have a certificate from a high school, normal school or county medical society indicating that the applicant had studied the required subjects. Or as an alternative, the aspiring physician could attempt to pass the entrance exams as outlined in the University Catalogue of 1888-1889. 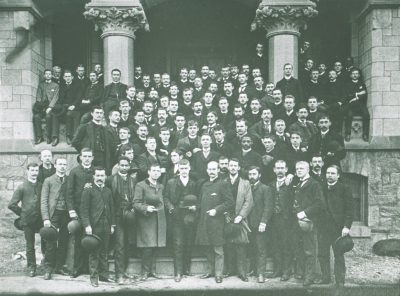 Medical Class of 1889, 1889
Get more image details
Of those whose background is known, less than half (32 students) were college graduates. Nine of these college graduates had received their A.B. (or in one case, Ph.B.) degrees from the University of Pennsylvania in either 1885 or 1886. Four of the five who had earned their degrees in pharmacy had graduated from the Philadelphia College of Pharmacy. Most of the others had graduated from various liberal arts colleges in Pennsylvania (Bucknell, Dickinson, Franklin and Marshall, Haverford, Lafayette, Lehigh, Pennsylvania College, Swarthmore, Washington and Jefferson, Western University of Pennsylvania or Westminster). A few were graduates of Dartmouth, Princeton, Trinity, or Yale, or from state universities in Iowa, Michigan, Minnesota and South Carolina.

Some students had finished a year or two of college before enrolling in Penn’s Medical School. Six members of the Class of 1889 had attended state normal schools; three others had completed their freshman or sophomore year in the College of the University of Pennsylvania before transferring into the Medical School.

At least 32 students began medical school with no previous higher education. Eleven of these had received their secondary education in private academies. One student had studied with a private tutor and another had been educated in a missionary institute. Four more were graduates of Philadelphia’s prestigious Central High School. The secondary education of the remaining 15 of these medical students had been limited to public schools.

A close look at the 128 young men who earned their medical degrees in 1889 reveals that students were drawn from a wide geographic area, stretching from New England to the far western states and even to South America and Asia. Not surprisingly however, the bulk of these graduates hailed from Pennsylvania, and in particular, Philadelphia.

Of the 1889 graduates, 72 percent (90 students) were from Pennsylvania, including 30 percent (38 students) from the City of Philadelphia. New Jersey was the next most common state of origin, with five graduates. Other states represented included New Hampshire, New York, Delaware, Maryland and Washington D.C. in the Northeast; Virginia, South Carolina and Texas in the South; Ohio, Illinois, Iowa, Minnesota and Missouri in the Midwest; and Washington and New Mexico in the West. Five graduates came from abroad: Nicaragua, Brazil, Armenia, Turkey and India.

The mix of Philadelphia students to include men from Pennsylvania, other states and other countries is also seen among the 69 medical students who did course work with the Class of 1898, but did not graduate in 1898. Philadelphia was even more strongly represented here, with 28 students, or 41 percent of the 69 total non-graduates. Another 14 students came from areas of Philadelphia outside the city of Philadelphia. Less than 30 percent came from outside of Pennsylvania. These out-of-state students hailed from Maine, New York, New Jersey, West Virginia, Delaware and Maryland in the Northeast; from Virginia, Tennessee, Kentucky, Mississippi and Texas in the South; Iowa in the Midwest and California in the West. Eight other students came from abroad: Canada, Cuba, Columbia, Nicaragua, the West Indies, England and Ireland. 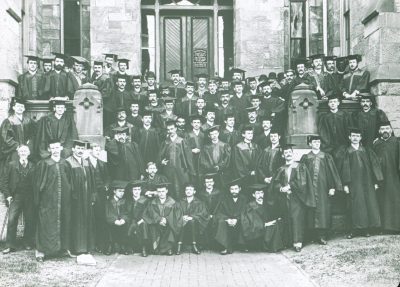 Medical Class of 1889, 1887
Get more image details
The enrollment of the Medical Class of 1889 remained remarkably constant during the three course years: 137 students in the first year, 136 students in the second year, and 139 in the third year. The make-up of the class, however, varied from year to year as individual students joined or left the class. During the second and third years of study, the class was augmented by 58 students who had begun their studies earlier but then progressed at too slow a rate to remain with their entering classes. Thus, a total of 197 students attended classes at one time during the three years of course work.

Not all of these 197 students received their medical degrees in 1889. The University of Pennsylvania presented 128 medical degrees in 1889 – 124 in May and another 4 in June. Of these 1889 graduates, 92 had entered medical school as first-year students in the fall of 1886; the other 36 were part of the 58 students who had begun their medical studies before 1886 and joined the Medical Class of 1889 after its first course year.

Another 28 of the 197 students taking classes as part of the Medical Class of 1889 were awarded their medical diplomas in subsequent years, 25 in 1890, two in 1891 and one in 1892. Two other students were associated with the dental profession, one earning his D.D.S. in 1889 and the other doing a year of medical school several years after receiving a D.D.S. in 1884. The remaining 39 men who studied with the Medical Class of 1889 never received a medical or a dental degree from Penn; thus, 80 percent of the 197 men who took courses together earned their professional degrees while 20 percent did not complete their medical studies at Penn.

It is interesting to note that, of the 137 who began as first year students with the Class of 1889, 67 percent graduated in three years and 83 percent in six years.

After graduation, these students had a variety of experiences. As general practitioners, specialists, and educators they practiced medicine everywhere from Philadelphia to California to Cuba to Switzerland. Some served in the Spanish-American War or in World War I.