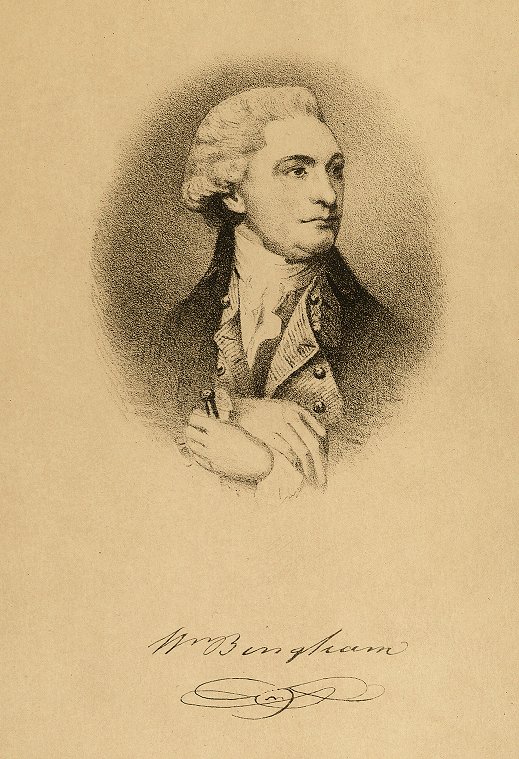 In 1776 the Continental Congress sent Bingham to French Martinique in the West Indies where he secured produce and munitions to supply the American army. He amassed great personal wealth through trade and ownership of privateers, which would keep him in litigation for most of his life. In 1780, he returned to Philadelphia and married Anne Willing, the daughter of his then former business partner. Between William’s wealth and kind demeanor, and Anne’s beauty and spirit for entertainment, they would become Philadelphia’s (and possibly the United States’) leading social couple. In 1781 he was the key founder and director of the Bank of North America, the first bank in the country.

William and Anne Bingham moved to England for most of the 1780s; from here William invested much of his wealth in land speculation, mostly in New York and Maine. Soon after his return to Philadelphia, Bingham was elected speaker of the Pennsylvania House of Representatives in 1790. From 1795 to 1801, Bingham served as a United States senator. The 1790s proved to be the high point of Bingham’s public life. Philadelphia was the nation’s capitol, and Bingham played host to the so-called Federalist court. He used his large, extremely elegant Philadelphia mansion to entertain the political and social elites of the new country. By reputation Bingham was the wealthiest man in America, a view reinforced in 1800 when he was assessed the highest tax of anyone in Philadelphia. He was the founder of Binghamton, New York, owner of large tracts of oil land in Pennsylvania, and the first president of the Philadelphia and Lancaster Turnpike Corporation.

As glamorous as the 1790s were for Bingham, they came to a crashing end. After the national capitol moved to Washington, D.C., his wife Anne died in 1801. Soon after Anne’s death the distraught Bingham moved to England with his son. He died at Bath, England, in 1804, possibly following a stroke. Although his moment of glory was short-lived, Bingham certainly made a huge impression on the United States in its infancy.