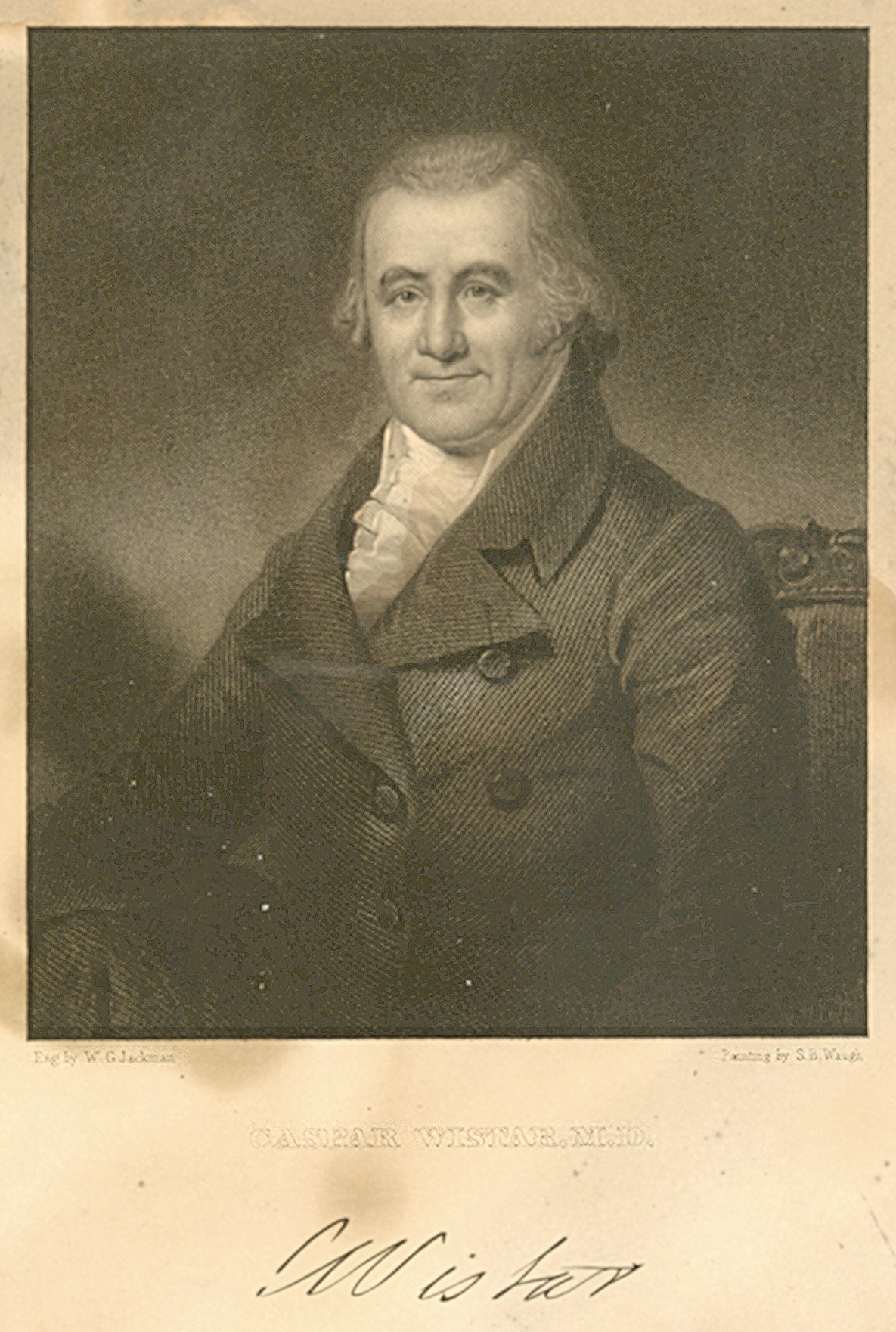 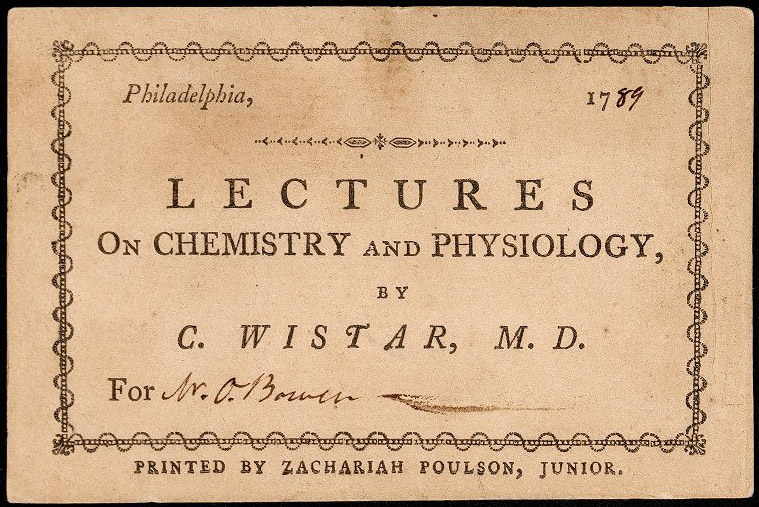 Caspar Wistar was born in Philadelphia, the son of Sarah Wyatt and Richard Wistar, a Quaker and a glass manufacturer. His early education was at the Friends School at Fourth and Walnut Streets. At age sixteen he volunteered as a nurse at the Battle of Germantown, where he was inspired by the horrors he saw there to study medicine.

That same year, 1777, Wistar began his three years of medical studies under the renowned Dr. John Redman, studying during the last year also with John Jones, a New York physician who had fled to Philadelphia. In 1779 Wistar matriculated in the medical department of the University of the State of Pennsylvania (now the University of Pennsylvania), where he earned his Bachelor of Medicine degree in 1782. His medical education was completed during a three year tour of study in England and Scotland, receiving the Doctor of Medicine degree from the University of Edinburgh in 1786.

Upon his return to Philadelphia in 1787, Wistar soon established a large private practice. That year he was also elected to the College of Physicians and was appointed a physician to the Philadelphia Dispensary; in 1793 he joined the staff of Pennsylvania Hospital. During the yellow fever epidemic of 1793, Wistar joined Benjamin Rush‘s efforts to treat patients. Wistar successfully recovered from his own bout with the fever, but afterward the friendship between the two doctors ended when Wistar criticized Rush’s drastic use of bleeding and purging as a treatment.

His first wife, Isabella Marshall died two years after their 1788 wedding. In 1798, Wistar married Elizabeth Mifflin, the niece of Governor Thomas Mifflin; they had three children.

For over thirty years from 1788 until his death, Wistar was a member of the Penn faculty. He was a professor of chemistry in the Medical Department of the College of Philadelphia from 1788 until the 1791 union of the College with the University of the State of Pennsylvania to form the University of Pennsylvania. At that time Wistar became adjunct professor of anatomy, midwifery, and surgery. After William Shippen‘s death in 1808, Wistar took over as professor of anatomy. Wistar was a popular teacher, enlivened by large models and drawings so that the many students could follow his lectures. He was also the author of a two-volume anatomy textbook.

Outside the college, Wistar was a member and president of both the American Philosophical Society and the Society for the Abolition of Slavery. He was also involved with the Pennsylvania Prison Society, the Humane Society, and the Society for Circulating the Benefit of Vaccination. Politically, Wistar was a Jeffersonian Democrat rather than a Federalist, but he refused, despite the urgings of Philadelphia Democrats, to run for office.

Wistar was a trustee of the College of Philadelphia (now the University of Pennsylvania) from 1789-1791. After the formation of the University of Pennsylvania, Wistar served only as a faculty member, not as a trustee. At Penn his name lives on in the Wistar Institute, which was founded by Wistar’s great-nephew Isaac Jones Wistar in 1892 from Wistar’s private collection of anatomical specimens.