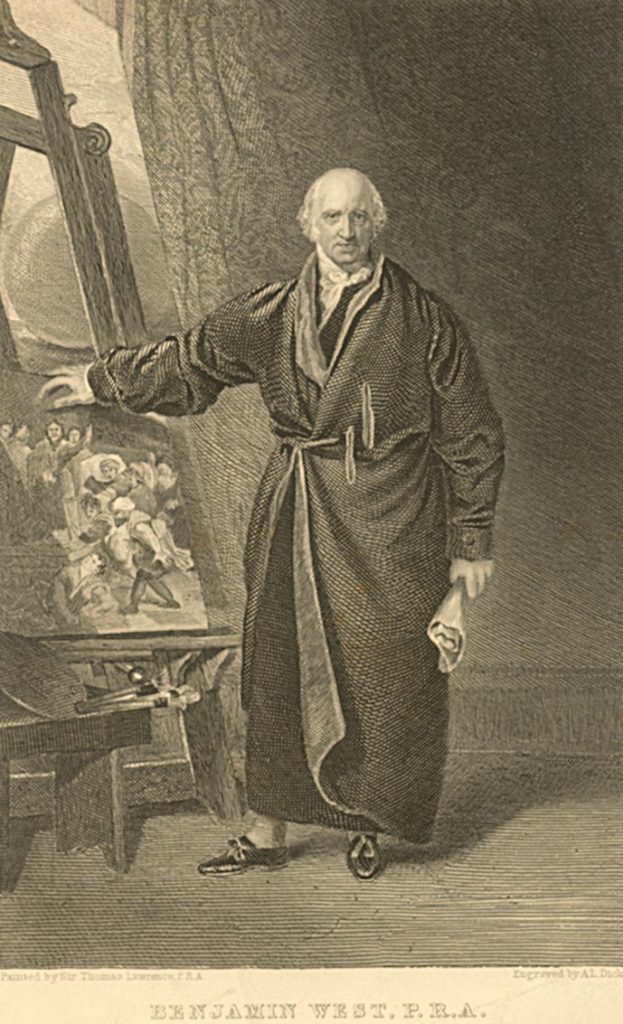 Benjamin West, son of Sarah Pearson and John West, was born in 1738 near Springfield in Chester (now Delaware) County, Pennsylvania.

West’s name does not appear in the tuition account books of the Academy and College of Philadelphia (now the University of Pennsylvania). However, it is certain that West studied under Provost Smith either in formal classes or privately. According to John Galt, who obtained his information directly from West for a biography published in 1816, Smith was introduced to West while visiting a German school in Lancaster. He was so impressed by the boy’s artistic ability that he offered to teach him history and classical literature.

Smith tailored a curriculum specifically suited to the emerging artist. Instead of emphasizing grammar, Smith directed West’s attention to passages of ancient history which would most impress the artist and encourage his imagination. Smith also acquainted young West with Jacob Duché and Francis Hopkinson, members of Penn’s first graduating class, the Class of 1757. It was during this time that West produced this sketch of David James Dove, then the colorful English master of the Academy of Philadelphia.

West’s earliest professional work was in the line of portraiture; he was soon able to establish himself as a portrait painter in Philadelphia, and then in 1759 in New York City. In 1760, Provost Smith, wishing to encourage West to seek further study in the Old World, made it possible for West to accompany the son of a Philadelphia merchant to Europe. Although he was elected to the American Philosophical Society in 1768, West spent the remainder of his life abroad, first going to Italy and then moving on to London in 1763. In England he was soon the object of attention from the highest persons of the kingdom, and was even offered knighthood, which he declined. In 1765, he married Elizabeth, daughter of Robert Shewell of Philadelphia.

As his fame grew, West became one of the founders of the Royal Academy in 1768, serving as its president from 1782 to 1815. His works number upward of 400 pictures in oil, being particularly devoted to historical subjects. West greatly influenced English historical painting by breaking radically from conventional laws, such as representing military men in their contemporary uniforms instead of classic togas. He died in London on March 11, 1820, and was buried in St. Paul’s Cathedral.