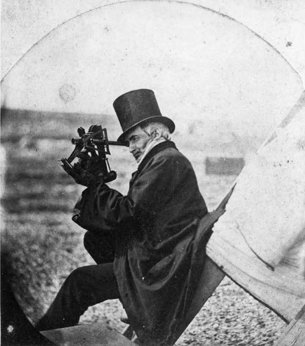 Alexander Dallas Bache received his education at the United States Military Academy, graduating with the Class of 1825. After his graduation he was appointed Lieutenant of Engineers, but because of his teaching ability he was also selected to fill the position of assistant professor of engineering at West Point. During these first years after his college graduation, he was also given charge of the construction of Fort Adams at Newport, and it was at this place he met his future wife, Nancy Clarke Fowler.

Professor Bache was appointed professor of natural philosophy and chemistry at the University of Pennsylvania in 1828, which position he held until 1836. During this time he became associated with the Franklin Institute and contributed constantly to its Journal; he conducted extensive experiments and observations in physics and meteorology and won renown for his research on the subject of boiler expansion.

Bache was chosen as Girard College’s first president upon its foundation and went to Europe to study the various school systems there. However, the funds for the erection of the College were not available upon his return, so Professor Bache became president of Central High School in Philadelphia. During 1841-1842 he served as superintendent of the Philadelphia Public Schools and also directed a magnetic and meteorological observatory under the auspices of the American Philosophical Society, of which he was a prominent member.

In 1843 Bache returned to his chair of chemistry at the University, but after one year he resigned to accept the position of superintendent of the United States Coast Survey. Under his able direction, the Survey at once became practically valuable; during the Civil War the Survey provided vital assistance, especially in 1863 when Bache was chief engineer in charge of the defense of Philadelphia.

In addition to his other duties he was one of the incorporators of the Smithsonian Institute, serving as a member of its Board of Managers until his death. Professor Bache was vice president of the United Sanitary Commission during the Civil War, and president of the American Philosophical Society, the American Philosophical Association for the Advancement of Science, and the National Academy of Sciences. He was an honorary member of the Royal Society of London, the Royal Academy of Turin, the Imperial Geographical Society of Vienna, and the Institute of France. The degree of doctor of laws was conferred upon him by the University of the City of New York (now New York University) in 1836, by the University of Pennsylvania in 1837, and by Harvard University in 1851.

He was the author of many papers on scientific subjects, his main work being his Observations at the Magnetic and Meteorological Observatory at Girard College, published in three volumes, 1840-1847. He left $42,000 in trust to the National Academy of Sciences, the income of which is to be devoted to physical research. He died in Providence, Rhode Island, on February 17, 1867.