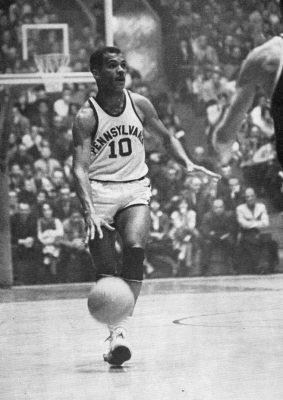 John Wideman with the ball, 1963
Get more image details
Wideman typified this strikingly successful balance between academics and athletics more than anyone else. The apotheosis of an Ivy League student athlete, Wideman excelled at nearly everything. Besides serving as team captain, Wideman’s list of academic achievements seems endless. As described by William K. Grollman in the Daily Pennsylvanian, “His academic record alone is staggering….Dean’s List in his English major, Phi Beta Kappa, and the Phi Sigma…prize in creative writing….” In an article in Look magazine profiling Wideman, Gene Shalit explained that “…Wideman has been showered with so many academic and athletic honors, awards and ‘firsts’ that he is unable to enumerate them.” Ironically, Wideman received much more praise as an undergraduate in 1963 then he does today, despite being a prolific award winning writer.

Growing up in the Homewood section of Pittsburgh, Wideman traveled across Pennsylvania to attend Penn on a $2,250 scholarship. After attending Peabody High School, a public and integrated school, Wideman was struck by the drastic changes in his daily life once he arrived at Penn. In his autobiographical work Brothers and Keepers, Wideman explained the transition, recounting,

I was running away from Pittsburgh, from poverty, from blackness…I’d earned a scholarship and a train ticket over the mountains to Philadelphia…If I ever doubted how good I had it…at school in that world of books, exams, pretty, rich white girls, a roommate from Long Island who unpacked more pairs of brand-new jockey shorts and T-shirts than they had in Kaufmann’s department store,…you all were back home in the ghetto to remind me how lucky I was.

In so many ways, Penn was an entirely different world for Wideman.