After graduation he worked for several architectural firms, including John Torrey Windrim‘s firm, which specialized in the Beaux Arts style, and Bissell & Sinkler, which focused on colonial revival architecture. Campbell was soon ready to open his own firm and worked independently for the rest of his career. During World War I, he served as a second lieutenant in the U.S. Army. From 1920 until 1953 he taught classes at the School of Architecture of the University of Pennsylvania. From 1927 until 1966 he taught classes at the Pennsylvania Academy of Fine Arts. Campbell was very interested in the history of Philadelphia architecture, and he published an article in 1951 that launched the reexamination and revival of the works of Frank Furness. 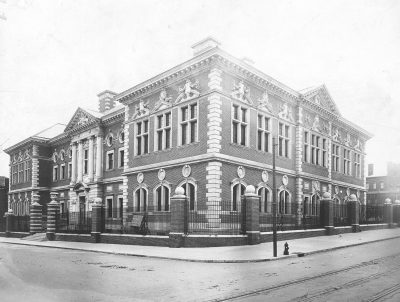 Law School, 1899
Get more image details
The Law School building, now known as Silverman Hall, was built between 1899 and 1900. It was designed by Cope and Stewardson and modeled on the works of Christopher Wren. The building houses the Biddle Law Library as well as classrooms and offices. Silverman Hall was formerly known as William Draper Lewis Hall, named for the man who was responsible for moving the Law School to West Philadelphia and hiring a full-time faculty.