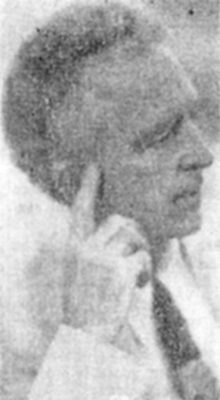 Douglas Dobell Ellington (1886-1960), B.S. 1912
Get more image details
Douglas Dobell Ellington drew the sketch of the portal to the Evans Institute which appears on this University of Pennsylvania Bicentennial Wedgwood China plate. A native of North Carolina, Ellington attended Randolph Macon College before coming to Philadelphia to study at both the Drexel Insitute and the University of Pennsylvania. He earned the degree of Bachelor of Science in Architecture (B.S. in Arch.) from Penn with the Class of 1912.

Ellington was awarded the Paris Prize in 1912, and while in Paris became the first American to win the Prix Rougevin at the Ecole de Beaux Arts. Ellington later taught architecture at the Drexel Institute, the Carnegie Institute of Technology (now Carnegie Mellon University), and Columbia University. He returned to North Carolina to set up a practice in the 1920s, and later moved to Charleston, South Carolina. Aside from architecture, Ellington was also an author and artist whose watercolors have been displayed at numerous galleries. 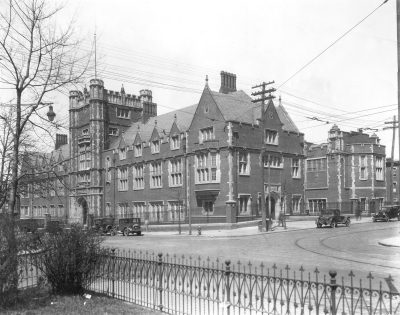 Thomas W. Evans Museum and Dental Institute (built 1912-1915, Cope & Stewardson and John T. Windrim, architects), c. 1925
Get more image details
The Thomas W. Evans Museum and Dental Institute houses Penn’s School of Dentistry. The building, built between 1912 and 1915, was designed by John Torrey Windrim in consultation with Cope and Stewardson. Thomas Evans, an American dentist as well as court dentist to the Emperor Napoleon III, specialized in giving anesthetic dental care to wealthy Europeans at a time when very few dentists used anesthetics. He left a large portion of his substantial wealth to the University for the purpose of setting up the dental school in a new building and opening a museum to house the rarities he collected over his lifetime.