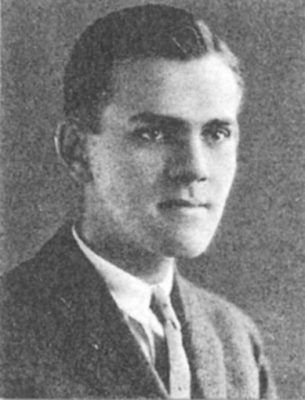 Darwin H. Urffer, 1925
Get more image details
Darwin H. Urffer drew the sketch of College Hall which appears on this University of Pennsylvania Bicentennial Wedgwood China plate. Urffer was born in Philadelphia in 1902 and earned the degree of Bachelor of Architecture (B.Arch.) with the Class of 1925 and the degree of Master of Architecture (M.Arch.) with the Class of 1926. While a student at the University, he was awarded the Woodman Scholarship and the Alfred Spayd Brooke Prize. 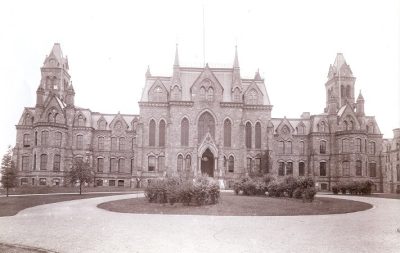 College Hall, 1892
Get more image details
College Hall was the first building on the University’s West Philadelphia Campus. It was designed by Thomas Webb Richards, the University’s first professor of drawing and architecture, and constructed in 1871 and 1872. Originally College Hall housed all departments of the College; the Medical School was housed in Logan Hall, built 1873-1874. College Hall was constructed with towers at each end; these towers were dismantled in 1914, leaving only their bases. The green serpentine stone from which College Hall is constructed is very susceptible to air pollution and must be cleaned to keep its original color. College Hall is now on the National Registry of Historic Places.

Visible in the background of this plate is Psi Upsilon-Tau Chapter fraternity house, constructed at 300 South 36th Street in 1899.