Wedgwood china, cup depicting a Reunion in the Triangle, 1940
Get more image details

Alfred Bendiner, c. 1960
Get more image details
this University of Pennsylvania Bicentennial Wedgwood china demitasse cup. He was born in Pittsburgh, Pennsylvania to Hungarian immigrant parents. The family moved to Philadelphia when Bendiner was young and he graduated from Philadelphia’s Northeast High School in 1917. Between high school and college, Bendiner joined the army and fought in World War I.

In 1922 Bendiner graduated from the University of Pennsylvania with the degree of Bachelor of Science in Architecture. His first work as an architect was at the firm of Stewardson and Page, which had begun as Cope and Stewardson. 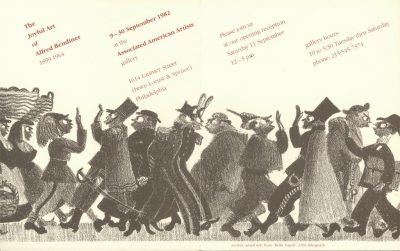 The Joyful Art of Alfred Bendiner 1899-1964, brochure, 1982
Get more image details
Several years later he returned to the University of Pennsylvania to earn the degree of Master of Science in 1927. Bendiner then worked in Paul Cret‘s firm until he started his own firm in 1933. Later in his life, he served as president of the Philadelphia Chapter of the American Institute of Architects.

Bendiner’s talents were not limited to architecture; he was well known for his art and essays. His publications included Music to My Eyes (1952), Bendiner’s Philadelphia (1964), and contributions to Atlantic Monthly, Harper’s. Following his death in 1964, there were several shows of his art in galleries in the Philadelphia area.

Subject: Reunion in the Triangle 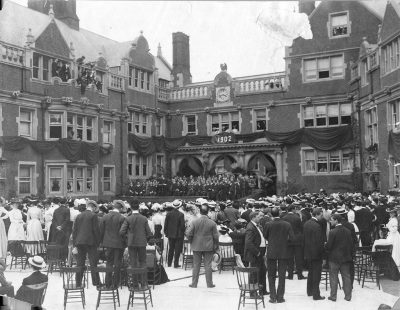 Class Day ceremonies, 1902
Get more image details
The triangle is a part of the dormitory quadrangle designed by the architectural firm, Cope and Stewardson.

Because Provost William Pepper believed dormitories would be beneficial for students at the University, he sponsored a contest for the design of the dormitories. This 1892 contest was won by Walter Cope and John Stewardson. To create a more vibrant atmosphere, these two architects decided to build the dormitories of red brick and limestone rather than the gray stone used for most buildings already existing on campus. The idea for their design was inspired by the dormitories at several universities in England. The “Quad,” as it is known, was mostly built between 1894 and 1929. The two-block long quad is broken into many houses named for individual donors to the University of Pennsylvania.