John Stewart Detlie drew the sketch of the Houston Hall Porch which appears on one of the University of Pennsylvania Bicentennial Wedgwood china demitasse cups. He was born in Sioux Falls, South Dakota, in 1908 and earned the degree of Bachelor of Science from the University of Alabama before attending the University of Pennsylvania. At Penn he earned the degrees of Bachelor and Master of Science in 1932 and 1933 respectively. While working towards his B.S. in Arch. at Penn, he was awarded the Historic Ornament Prize, the John Stewardson Memorial Scholarship and the Theophilus Parsons Chandler Fellowship.

In 1934 Detlie moved to Hollywood, California to work in the movie industry. In 1940 he married Veronica Lake but they divorced three years later. Also in 1940 he was nominated for an Oscar for his work as production designer on the film, Bitter Sweet. starring Jeanette MacDonald and Nelson Eddy. As a member of the Army Corps of Engineers during World War II, Detlie worked on the task of camouflaging military installations, including the Boeing plant. After the war ended, Detlie moved to Seattle to work in an architectural firm, designing such buildings as Children’s Orthopedic Hospital, Temple De Hirsch and building for the University of Washington. A painter as well as an architect, Detlie was a pioneer in the 1950’s Seattle arts movement. After the death of his young son in 1960, Detlie and his second wife later left Seattle to continue his work as an architect in southern California, Baltimore and Hawaii. 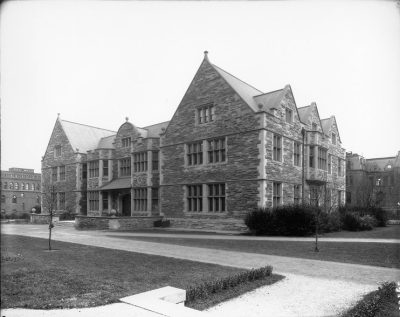 Houston Hall, 1903
Get more image details
Houston Hall was the first American building to be built as a student union in America. The designers, William C. Hays, and Milton B. Medary, finished first and second respectively in an 1893 contest among students and graduates of Penn’s Architecture School to design Houston Hall. They shared both the thousand dollar prize and the opportunity to work as apprentices in the architecture firm of Frank Miles Day as it oversaw the project. Construction began in 1894. Renovations and additions were done in 1936 by Robert Rhodes McGoodwin. After the appearance of the University Bicentennial commemorative cups, Houston Hall would again be altered, in 1980 by Venturi, Rauch and Scott Brown, and from 1995 through 1999 by Venturi, Scott Brown and Associates.