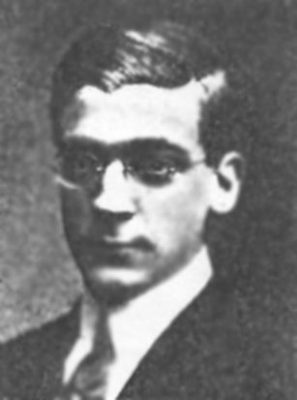 John Frederick Harbeson, 1910
Get more image details
John Frederick Harbeson drew the sketch of Penn’s first College Hall and dormitory which appears on the University of Pennsylvania Bicentennial Wedgwood china demitasse cup, Pre-Revolutionary Buildings. He was born in Philadelphia in 1888. He attended Central High School from which he graduated in 1906. He attended the University of Pennsylvania from which he earned the degree of Bachelor of Science in Architecture in 1910 and the degree of Master of Science in 1911. He was an instructor and professor of architecture at Penn from 1914 until 1948, serving as chair of the Department of Architecture from 1927 until 1935 and as acting Dean of the School of Fine Arts for the academic year 1929-1930.

Harbeson was well known as a designer of monuments commemorating the actions of American veterans of World War II, including the Omaha Beach Memorial in France. Harbeson’s firm, Harbeson, Hugh, Livingston, and Larson (now known as H2L2) redesigned the house and senate chambers in Washington D.C. He was the architect to Fairmount Park Art Association and a noted author on the Beaux-Arts approach to architecture. He served as the president of the National Academy of Design and the president of the Philadelphia chapter of American Institute of Architects. He was also the architect of the new University of Pennsylvania library building in 1952. He died in Philadelphia in 1986 at the age of 98. 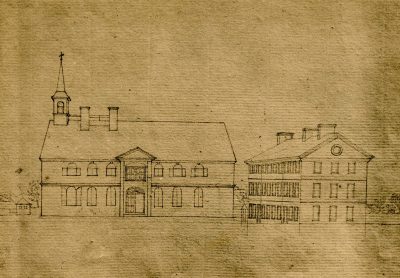 Fourth Street campus, College of Philadelphia: Academy/College Building (built 1740) and Dormitory/Charity School (built 1762), c. 1770. Reproduction of a sketch by French artist Pierre Eugène Du Simitière.
Get more image details
In 1751 the first classes of the Philadelphia Academy, the precursor to the University of Pennsylvania, were held in the former Whitefield meeting house at Fourth and Arch Streets, Penn’s first campus. The Academy was quickly joined by the Charity School and the College; and classes for all three schools were held in this building during the eighteenth century. In 1763 a three-story “New Building,” used mainly as a dormitory, was also built on this campus. The Medical School was at a separate location, Surgeon’s Hall on Fifth Street, near Walnut. The master carpenter and builder credited with the design of the Pre-Revolutionary buildings was Edmund Woolley.

In 1801 the University consolidated all its schools a new campus on Ninth Street, between Market and Chestnut Streets, leaving the Academy and Charity School at the original Fourth and Arch Street location.