Skimmer activities evolved over time. Events were planned and coordinated by a student Skimmer Committee, which was organized under the umbrella of Undergraduate Council. but involved contributions by a variety of student groups, including fraternities, The Daily Pennsylvanian, the crew managerial staff, the student union in Houston Hall. Approved attire included straw boater hats and canes, usually worn with Bermuda shorts; in the 1950’s flannels, waistcoats, and white bucks were worn to some of the dances. 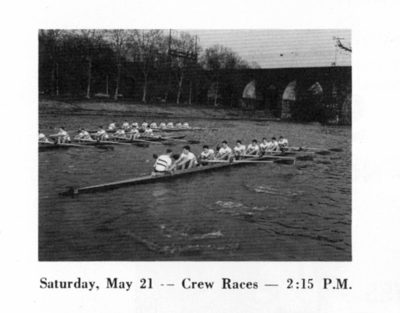 By 1951, key features of Skimmer Day were in place. For the next two decades Skimmer would be scheduled on the weekend of a home regatta featuring a cup competition: the Adams, the Blackwell, Childs or Orr cup. The only exception would be 1957, when the only home cup competition was the weekend of the Penn Relays.

Friday events always occurred on-campus and included rallies, dances and concerts. For the first few Skimmers, there was a rally for the crew early Friday evening. During the 1950’s and early 1960’s the Houston Hall student union sponsored a dance of some sort for that night, the Spring Dance, the Senior dinner dance or some other affair. Sometimes other events were also on the Friday schedule. After its first Skimmer performance on a Saturday in 1954, the Penn Glee Club gave a concert on Friday evenings for a number of years. In the early 1960s Men’s Hey Day was held the week before Skimmer, with some activities scheduled for Friday. 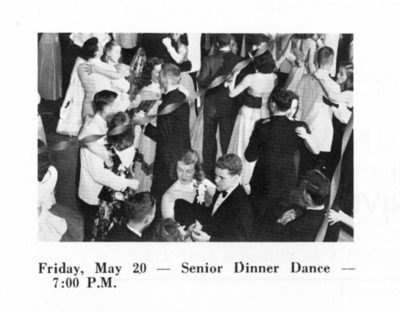 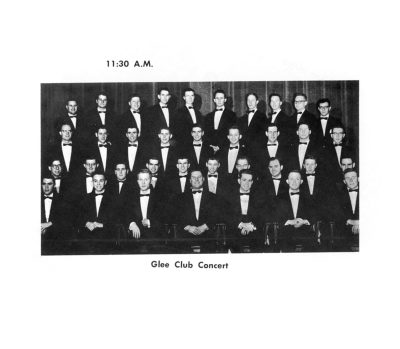 Saturday’s daytime events were held along the Schuylkill River. The main event was of course the regatta itself, but there were other races too. Starting in 1950, the Honor Society Race provided comic relief. Other races, by freshmen, the junior varsity or even women, also took place in different years. The following year, 1951, a poster pageant directed and produced entirely by women was added to the program. The posters in the competition were entirely the work of sororities and women’s dormitories. Skimmer Day and the crew were the themes of the pictorial display. 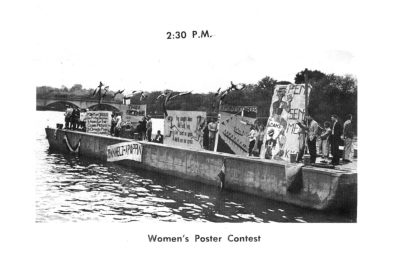 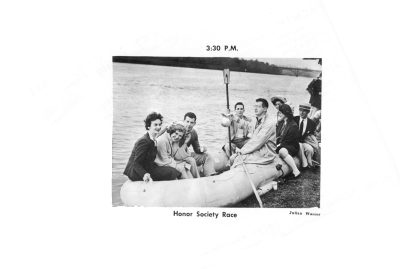 Motorcade and jazz along the river

As the 1950’s progressed, new activities appeared. In 1952 fraternities began parading from the campus to the banks of the Schuylkill River in a motorcade, with a police escort. By 1955, jazz entertainment was held along the river to give a Mardi Gras feel to the day. In an attempt to control the crowds, tickets were introduced in 1956 and concession booths in 1958. Approved attire included straw boater hats and canes, usually worn with Bermuda shorts; in the 1950’s flannels, waistcoats, and white bucks were worn to some of the dances. 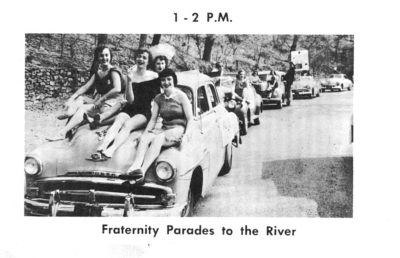 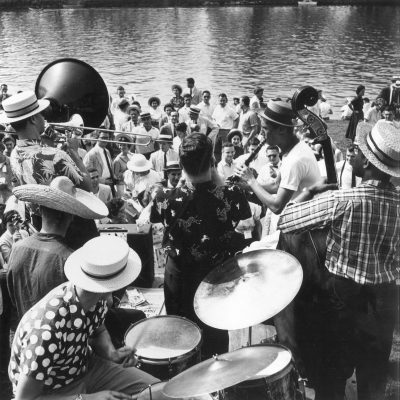 After the Saturday races, students customarily returned to campus, flocking to fraternity open houses and parties lasting through the evening late into the night.

In the early 1960s, in an attempt to curtail and control drinking in the fraternity houses, a Fright night Spectacular at Irvine and the Saturday night extravaganza at Franklin Field were implemented. In 1960, a jazz festival was scheduled for 8 pm in Franklin Field, with Louis Armstrong and his Allstar Band at the top of the bill. In 1963 this trend toward big name concert entertainment continued with a concert by the Limelighters in Franklin Field on Saturday night and also Friday afternoon performances in the Quad by the Panics with Cindy and the Misty singers. The 1965 headliners on Franklin Field included Chuck Berry, Marvin Gaye, The Chiffons and the Brandywine Singers.

During the late 1960’s and early 1970s, the weekend’s emphasis shifted away from the Penn crew and regattas on the Schuylkill River to activities and entertainment on-campus, until finally in 1973, Skimmer was replaced by Spring Fling. 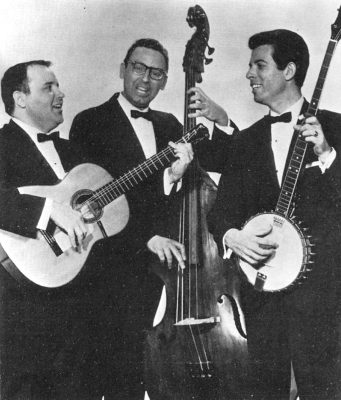