The annual student tradition of Skimmer began in 1949 and continued with only one interruption until it was replaced with Spring Fling in 1973. A simple Saturday gathering on the banks of the Schuylkill River to encourage the Penn crew soon expanded to become a weekend of social, musical and athletic events both along the River and on-campus. Soon thousands of students from up and down the East Coast flocked to Skimmer, enjoying not just the races, but also the jazz bands, the motorcades, the “co-ed” poster contest, the concerts, the dances, the fraternity parties, and the beer.

The event turned out to be too popular for its own good. After a few years, tickets were required for activities along the river in an attempt to control crowds and limit attendance to the Penn community and their guests. Both the alcohol and crowds, however, remained difficult to control, and youthful high spirits sometimes led not only to excessive litter and drunkenness, but also to injuries, property damage, and arrests – especially in 1955 and 1963.

Skimmer was originated and staged by a student committee coordinating input from the athletic department and various student groups. Soon, however, the repercussions of the event’s increasing scope and resulting problems led to the imposition of more and more restrictions by the Fairmount Park Commission, the University administration, and even the student leadership. As time went on, different strategies were used to rein in the less desirable aspects of this spring weekend.

Attempts were made to solve problems by limiting attendance to the Penn community, controlling the dispensing of alcohol, and offering headline entertainers to keep students too busy to get in trouble. Fairmount Park wanted to be relieved of the burden of policing and cleaning up after the Saturday revels along the river. The University administration wanted to gain some sort of control over crowds and behavior by staging activities on-campus rather than having students concentrate along the river or in the fraternity houses.

Despite the original intent to support the Penn crew and student desire to have their own event off-campus, students eventually accepted the substitution of Spring Fling for Skimmer as the setting for a spring weekend of student-organized activities.

The origins of Skimmer Day can be traced to a February 1949 gathering in a small back room at the Daily Pennsylvanian. In an attempt to arouse student interest in the crew races, crew manager William Black Grant (B.S. in Econ. 1949), DP writer Alan Oser (B.S. in Econ. 1950) and Philip James Moloney (B.S. in Econ. 1951) conceived of a day for students to gather on the banks of the Schuylkill to enjoy themselves while cheering on the crew. The event was named in honor of “Rusty” Callow, famous Penn crew coach. The date was chosen to coincide with the home regatta for the Blackwell Cup. Beyond the recommendation to wear straw hats, there was little planning. Publicity was limited to word of mouth and a few informal letters to fraternities, and it was assumed that liquid refreshment would take care of itself. Despite the lack of intensive preparations, the response was beyond anyone’s expectations. Thousands of enthusiastic student spectators appeared, and the event was judged hugely successful from its inception. 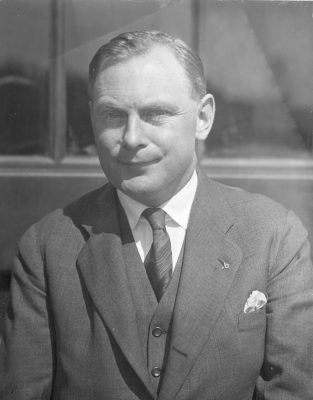 By January of 1950, planning for the second Callow Day was already underway. Organization of the event was coordinated by a three man committee, responsible for planning activities and publicity. The crew managerial staff published the program and directed the river events. Other student organizations also became involved, especially the Houston Hall student union and Penn’s WXPN radio station. The event was now a weekend event, beginning on Friday night with a rally for the crew and with the Spring Dance, a traditional Houston Hall event moved to this date. On Saturday, an Honor Society Race was added as comic relief. A live radio broadcast of the main race was provided from a blimp, reporting on the cheering students who filled the shoreline and the Penn victory which returned the Childs Cup to Philadelphia. Newspapers up and down the East Coast praised the event. The tradition was in place!

Phil Moloney proved to be the key student behind the establishment of this traditon. Not only was he one of the three undergraduates to conceive of Callow Day in 1949, he was also on the three-man 1950 Callow Day Committee. In 1951 (his senior year) Moloney would chair the event under its new name of “Skimmer Day” and include his own account of the first years of Callow Day in the 1951 Skimmer Day Program. 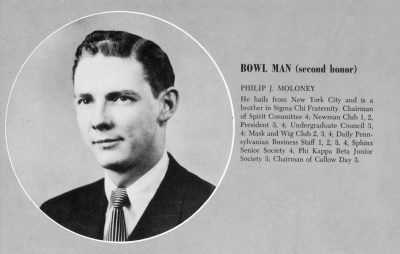 In 1951, when Coach Callow left Penn to teach and coach at Annapolis, a student poll was taken to rename the event “Skimmer Day” in honor of the straw boater hats which had become the accepted attire for the occasion. This year Phil Mahoney’s Skimmer Day Committee had twenty-nine members to plan activities for the weekend of the May 12 Adams Cup Regatta.

By this time, the event had spread all over the East coast, attracting thousands of undergraduates from many colleges. The celebration was in effect Skimmer Weekend, featuring a crew rally, the Honor Society Race, the regatta itself as well as two new activities – a Pre-Skimmer cabaret dance and a Poster pageant directed and produced entirely by women. 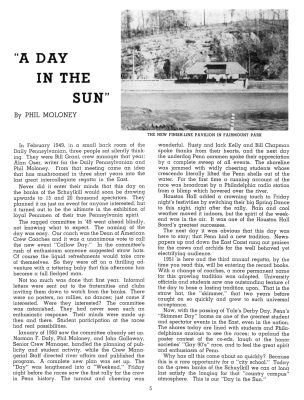