Organized swimming at the University dates back to the beginning of construction on Houston Hall in 1894. Even before the building was officially opened, in 1896, it was available to students as a headquarters for an undergraduate social club that housed many campus events. Houston Hall was considered one of the first student unions in the nation. It was home to many amenities such as a reading nook, small theater, swimming pool, gymnasium, and a bowling alley. Penn students were encouraged to apply for membership so they could take advantage of the variety of these student activities. The Club and all of the organizations occupying the hall were all directed by undergraduate students. On March 9, 1897, the University reported that a new committee was created to “look after the interests of those using the pool.” It consisted of a chairman and two subordinates, all three of whom were undergraduates.

The pool was located in the Houston Hall basement and only stretched 10 feet in width by 30 feet in length. It was infrequently used to hold “Swimming Exhibitions” during what was known as “Houston Club Monthly Smokers”. This was a monthly evening social event which consisted of entertaining activities such as bowling tournaments, billiards, dances, and instructional swimming exhibitions. There were also occasional exhibitions consisting of various displays of the current swimming styles or fancy strokes, team relay races and water polo competitions. The exhibitions were commonly held in collaboration with the National Swimming Association (N.S.A.), which was founded in 1893 in Philadelphia. It consisted of the representative amateur swimmers of Philadelphia and vicinity. The two teams would race each other and compete in water polo matches. Results for the races and water polo matches were reported the next week in the [Daily] Pennsylvanian. Columbia University Professor Charles Holroyd, a member of the N.S.A. and said to be an expert swimming master, originally directed these swimming exhibitions.

On April 5, 1897, Penn announced that the Houston Club had hired former world champion swimmer and instructor, George Kistler, to take on the responsibilities as overall director of the Houston Hall Pool. His prior swimming achievements made him a prime candidate for the position and later showed to be a very astute decision. George Kistler began to successfully develop both swimming and water polo teams.

George Kistler took over the swimming exhibitions soon after he was hired. On April 24th, 1897, Kistler gave his first swimming exhibition immediately following the University’s Athletic Carnival on Franklin Field. Under the guidance of Kistler the members of the Houston Club faced off against the N.S.A. in a water polo match, claiming victory in every event.

The year 1897, the year the university swim team was officially organized, also marked the start of Edward Carroll Schaeffer’s college swimming career under George Kistler. Under Kistler, E. C. Schaeffer was the first nationally prominent swimmer in intercollegiate competition. He set all 37 of his American records and 5 world records while attending the University of Pennsylvania. Kistler, who had been the world mile champ at one time himself, took Schaeffer under his wing and gave him special instruction. Kistler said that, “Schaeffer never had to extend himself in the middle distance events so I never did find out just how fast he could swim.” In 1900 the Philadelphia and New York newspapers reported that said Schaeffer would go to England to compete in the Olympic Games. The plan failed when no organization could be found to sponsor Schaeffer’s round trip expenses.

In 1903 the University began construction on its new gymnasium, Weightman Hall. When it was finished in 1904 it included a pool that replaced the one in Houston Hall. The Weightman Hall pool dimensions were 30 by 100 feet. At this time, the Board of Trustees and the faculty of the University made it mandatory that every student be able to swim. George Kistler was the administrator of the swimming program. The minimum requirement for all students was two lengths of the pool or 200 feet. The opening of Weightman Hall also marks the period when Coach Kistler made the transition from his job as the university’s swimming instructor to his career as a swimming coach. 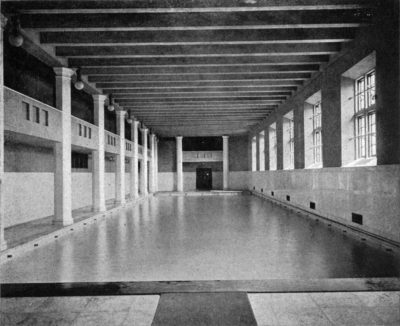 Kistler has been called the founder of intercollegiate swimming in America. Due to Penn’s success in the pool, in 1906 the swimming and water polo teams began to gain both moral and financial support from University’s Athletic Association. In fact, the creation of the first Intercollegiate swimming league was inspired by Kistler’s work with aquatics at the University. Penn went on to become the champions of America in 1908 and 1909. At this time, there were only four schools that participated regularly in the swimming and water polo competitions: Yale, Harvard, Columbia and Penn. 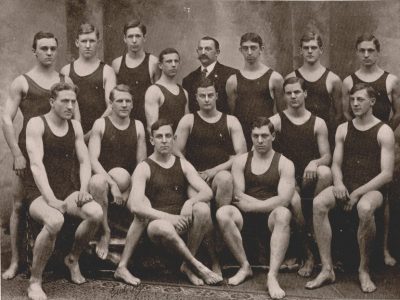 Swimming Highlights Since the Kistler Era

After a very successful career of more than 30 years, George Kistler retired in June of 1934. He was succeeded by William Merriam, who, a few years earlier, had assumed most of the coaching responsibilities. Penn swimming and diving has been competing under the National Collegiate Athletic Association (NCAA) since 1924 and with their Ivy League peers since 1938. Despite its initial popularity, water polo is no longer an official sport at Penn but has been a club sport since 1977. In 1968 the University built the Bernard Gimbel Gymnasium (now known as the David Pottruck Health and Fitness Center) which included an Olympic sized pool, which is known as the Sheerr Pool. Sheerr is now the Men’s and Women’s varsity swimming and diving training and competition pool.

Sources at the University Archives:

Bushnell, E. R. (1901). The History of Athletics at the University of Pennsylvania. Phialdelphia: The John C. Winston Company.

Compulsory Swimming: In Vogue at the University of Pennsylvania- How It Is Taught. (1903, January 26). The Boston Evening Transcript , p. 5.